PA president is allegedly expect to travel to Qatar following his three-day trip to Turkey. 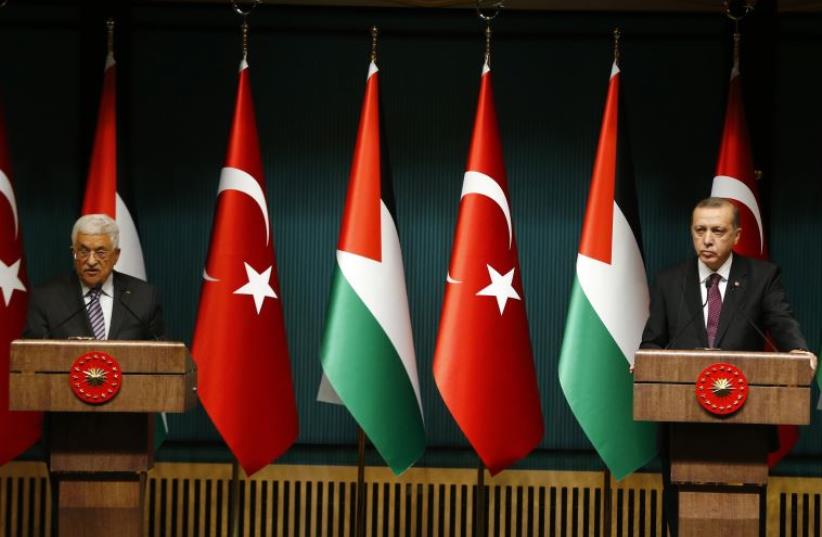 Turkey's President Tayyip Erdogan and Palestinian President Mahmoud Abbas (L) address the media at the Presidential Palace in Ankara January 12, 2015
(photo credit: REUTERS)
Advertisement
Palestinian Authority President Mahmoud Abbas met on Tuesday with his Turkish counterpart Reccip Tayip Erdogan and discussed bilateral ties and the latest regional developments during a three-day visit to the country.According to Turkish media, Abbas also stressed his solidarity with Turkey after the country's failed coup attempt in July.Abbas also met with Turkish Prime Minister Binali Yıldırım, who expressed Turkish support for the Palestinian cause and noted that an independent Palestinian state based on the 1967 borders with a capital in east Jerusalem was necessary for peace with Israel, Turkey's Daily Sabah paper cited . Yıldırım also vowed that Turkish aid to Gaza would continue in the future.  Under the terms of a reconciliation deal singed in July between Turkey and Israel, the latter will maintain its naval blockade of the Gaza Strip, but it will facilitate the transportation of humanitarian and civilian goods sent by Turkey.Abbas's visit came as suspended municipal Palestinian elections and reconciliation of prolonged rift between rival factions Hamas and Fatah hangs in the balance. Abbas is said to be expected to travel to Qatar following his time in Turkey.