According to an NGO, the migrants did not get asylum seeker status in the third country and made their way north to Libya to try to reach Europe, after which they ended up in the hands of ISIS. 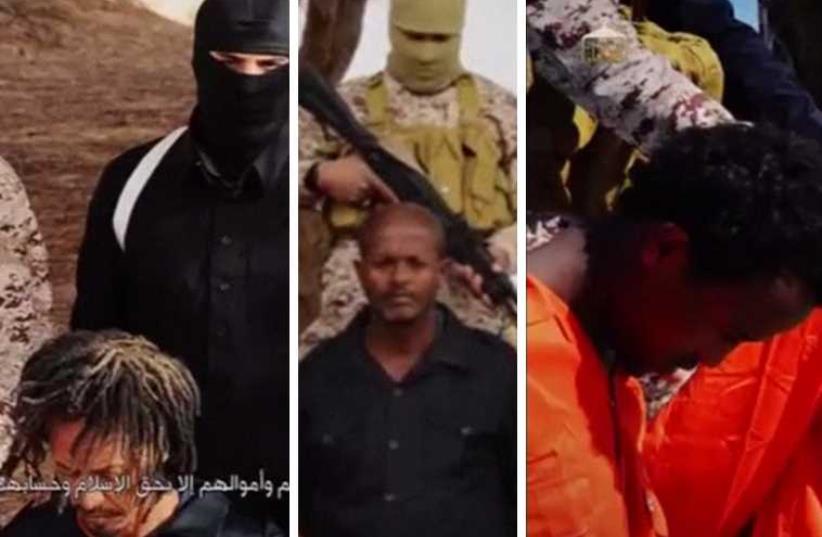 The three Eritrean asylum seekers said to have left Israel to a third country before ending up in Libya.
(photo credit: REUTERS)
Advertisement
Three Eritrean asylum-seekers who left Israel for a third country in the past year were among a group of Ethiopian Christians whom Islamic State beheaded or shot in a video it distributed this week, an Israeli NGO said Tuesday.According to the Hotline for Refugees and Migrants, one of the three men was identified by an Eritrean relative who works as a translator for the NGO, as well as by people who were jailed with him at the Holot detention facility in the South.Two other men in the video were identified by people who knew them in Holot and the NGO, but not by family, the organization added.
Islamic State, executes Christians, threatens more war unless non-Muslims convert
A detainee at Holot told The Jerusalem Post on Tuesday that one of the men had been jailed in Holot over the summer after spending seven years in the country without asylum-seeker status. He said the man had then been moved to the Saharonim prison after visiting Tel Aviv one day and failing to return to Holot in time for the night’s head count. It was from there that the man agreed to leave for a third country, which the Holot detainee said was Uganda.According to the hotline, the migrants did not receive asylum- seeker status in the third country and made their way north to Libya to try and reach Europe, but ended up in the hands of Islamic State.The Holot detainee said that the man in the video did not have a wife or children in Israel and that family members and people who knew him back in Eritrea had identified him as well.Sabine Hadad, a spokeswoman for the Population, Immigration and Borders Authority, said Tuesday that the authority was not familiar with the story and could not confirm it, but was checking the report.In late March, the Interior Ministry announced that it would begin ramping up efforts to get African migrants to agree to leave the country voluntarily for two unnamed third-party countries in Africa. PIBA said in March that migrants selected for voluntary deportation would have 30 days to get ready to leave, and those who refused would face a hearing on whether to imprison them.The issue of voluntary deportation is controversial in that those who agree to it are often in prison at the time or face the possibility of indefinite detention if they refuse deportation.For the past few years, Israel has maintained a policy of encouraging deportation, via the threat of detention but also via “positive incentives” like a one-time stipend.PIBA figures from late March stated that since the beginning of 2014, around 1,500 migrants had agreed to be deported to a third-party country in Africa, and around 7,000 had agreed to return to their home countries.PIBA said Tuesday that Israel had reached agreements with two African countries that were willing to absorb the migrants and that had agreed not to deport them to their home countries.Critics of the plan have said that those who agree to return do not get asylum-seeker status in the third-party countries and are often forced to leave those countries as well – sometimes for their home countries, where they could face persecution.When the plan was announced in late March, Interior Minister Gilad Erdan (Likud) said that “this process will encourage infiltrators to leave the territory of Israel in a safe and respectful way, and will be an effective tool to carry out our obligations to help residents of Israel and south Tel Aviv restore the way of life they were used to.”Tuesday’s news came a day after Transportation Minister Israel Katz sparked controversy for writing on Facebook that the drowning deaths of hundreds of African migrants in a boat that capsized en route to Europe from Libya was tragic, but that the incident validated Israel’s migrant policies. He said the tragedy showed how prudent it was for Israel to build a fence along the border with Egypt to stop the influx of migrants from Egypt, and that now that the elections were over, the Likud should get some credit for building the fence.building the fence.