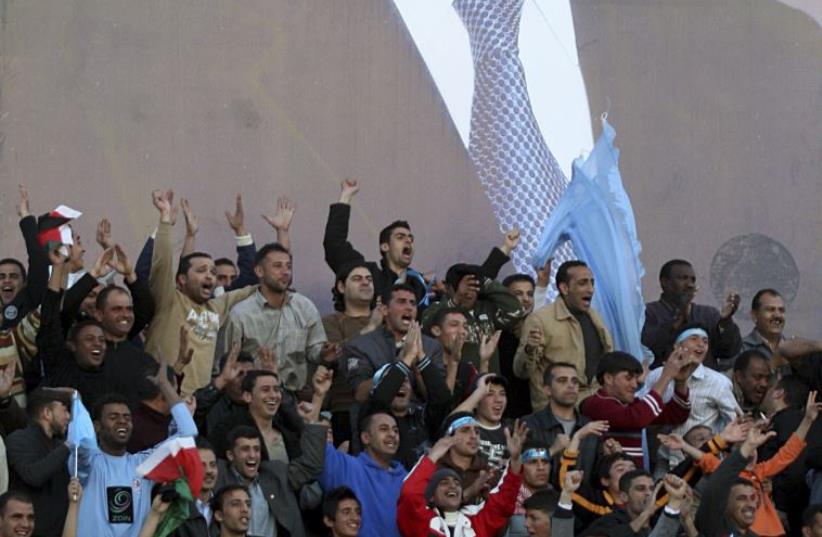 Fans cheer Jordan's Al-Faysali team during a soccer match against Morocco's Al Raja during their Arab Champions League in Amman March 12, 2008
(photo credit: REUTERS)
Advertisement
The split within Jordanian society between East Bankers and Jordanians of Palestinian origin is manifested in every field of life in the Hashemite Kingdom.On Wednesday, during a soccer match between the Faysali team, affiliated with the East Bank, and the Wihdat team, affiliated with the Palestinian population of Jordan, this split remerged.After losing the match, Faysali fans started chanting: "With soul and blood we will redeem you, Israel," distorting the well-known refrain: "With soul and blood we will redeem you, al-Aksa," which is the symbol of the Arab endeavors for the so-called liberation of Palestine.By replacing "Palestine" and "al-Aksa" with "Israel", Faysali fans repeated their ritual of provoking Palestinian-affiliated al-Wihdat. Almost every encounter between these two soccer teams in the past few years has ended with skirmishes and clashes between fans of the two opposing teams.In 2009, for instance, police stopped a game between the teams after Faysali fans began cursing not only Wihdat fans, but also Jordan's Queen Rania and the heirs to the throne.This incident aroused great commotion on social media networks. Marwa Salim, a Jordanian citizen, commented on Facebook saying that the fans chanted: "With soul and blood we will redeem you Faysali." Salim also said that "even if they did chant 'Israel', it is only a small group of people who does not represent the Jordanian people."Palestinians living in the West Bank and Gaza also participated in the debates that followed the incident. "If they would have chanted: 'With soul and with blood we will redeem you Palestine' it would have been surprising. Their king sold Palestine and agreed to the formation of a Jewish state on Palestine's land," a Palestinian living in Gaza wrote on Facebook.A Palestinian fan of Faysali, residing in Gaza, described on his Facebook page the humiliation he is undergoing being a Palestinian fan of a Jordanian team. "I will stay Faysalawi (Faysali fan), and to those who doubt my Palestinian citizenship I say: 'I am Palestinian, living in Gaza. You are invited to come and visit me," the Palestinian fan wrote.