After reports of over 250 Hezbollah deaths in Damascus, Syrian rebel leader urges Iran to withdraw forces and participate in upcoming discussions. 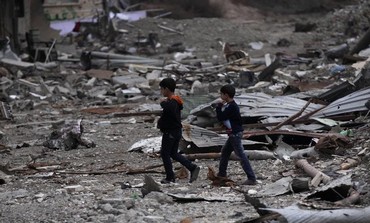 Reports of hundreds of deaths from fighting in Syria were reported Thursday as preparations continue for the Geneva 2 talks, set to take place in January, aimed at ending the country’s two and half year civil war.More than 250 Hezbollah fighters died while fighting in Damascus, the Lebanese Al-Mustaqbal newspaper, which tends to be supportive of the Syrian rebels, stated on Thursday.Meanwhile, the opposition Syrian National Coalition wrote on its website that a Scud missile killed 35 people and wounded dozens in a market in Raqqa on Wednesday.Yet both reports were unable to be independently confirmed.The Syrian National Coalition President Ahmad Jarba announced on Wednesday that the group will attend January’s talks, despite hesitations by rebel groups that the talks will produce any solution to the conflict.In an interview with Reuters and the Associated Press, Jarba also said regional power Iran should only be allowed to attend if it stopped taking part in the bloodshed in Syria and withdrew its forces and proxies.The coalition said previously it was ready to attend if humanitarian aid corridors were set up and political prisoners released. It insists that President Bashar Assad can play no future role in Syria.“We are now ready to go to Geneva,” Jarba said on a visit to Cairo, adding that the opposition viewed the Geneva talks as a step to a leadership transition and a “genuine democratic transformation in Syria.”“There is no way that the individual responsible for the destruction of the country can be responsible for building the country,” he added, referring to Assad. 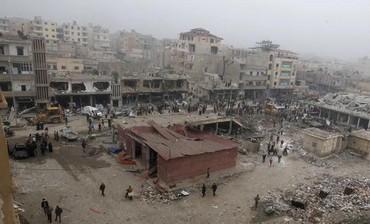 Assad has consolidated his power around Damascus and central Syria after months of steady military gains. With support from Iran and Russia and backed by fighters from Lebanon and Iraq, his soldiers recaptured towns this month on the edge of the capital and the southern approaches to Aleppo.Syria, which has announced it will attend the peace talks, said on Wednesday that Western countries that also demand that Assad step down should either stop “dreaming” or forget attending the conference.Al-Qaida-linked gunmen have executed the commander of a rival rebel faction and six of his men, an amateur video of the public execution showed, part of their campaign to marginalize other groups.The rebel group The Islamic State in Iraq and the Levant, or ISIL, have taken advantage of a power vacuum in rebel-held areas to assert its authority over more moderate elements of the armed opposition.The video, posted online by the Syrian Observatory for Human Rights on Wednesday, shows armed men in black standing below an ISIL banner.The Observatory said the video was taken in the northern Syrian town of Atarib in Idlib province. Its authenticity could not be independently confirmed.A masked man on the video identifies seven men kneeling as members of the Ghurabaa al-Sham brigade, a more moderate Islamist group that was one of the first to fight Assad. A man who appeared to be Commander Hassan Jazeera was among them.“Hassan Jazeera is the most corrupt and the biggest thief,” said the man. He spoke into a microphone to a crowd of men, some of whom used their mobile phones to film the killing.The man, reading from a piece of paper, said Jazeera’s men were also charged with kidnapping and had been tried in a religious court run by ISIL. They were then shot in the head.Jazeera and his men were arrested by ISIL a month ago, the UK-based Observatory said.The rise of al-Qaida in Syria has forced some in the West to temper calls for Assad’s removal from power.In August, ISIL took control of the northern border town of Azaz, expelling western-backed Free Syrian Army units. On Friday, ISIL captured a second border town, ousting a less radical Islamist rebel unit and detaining its leader.Meanwhile, Iranian President Hassan Rouhani spoke with Assad on Wednesday, reiterating Iran’s support for a solution to the war.“There is no military solution to the crisis in Syria, and restoration of stability and peace in the friend country of Syria is one of the objectives pursued by the Islamic Republic of Iran,” Rouhani said according to Iran’s Tasnim News Agency.He also said that Iran would provide humanitarian assistance to the Syrian people.For his part, Assad congratulated Tehran for the nuclear deal achieved with world powers over the country’s nuclear program saying it is “a victory not only for Tehran, but for all “developing countries around the globe.”