Some members of the US administration fear that sharing the base is endangering the lives of American soldiers. 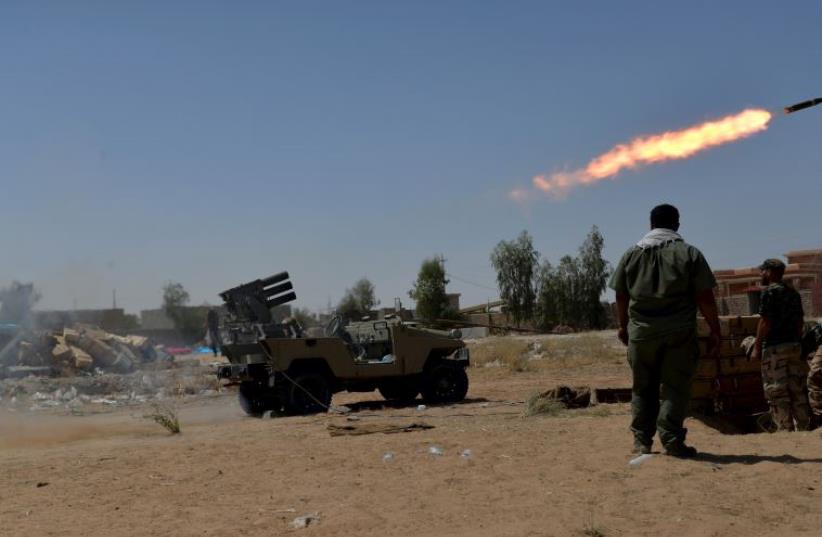 Shiite fighters launch a rocket towards Islamic State militants on the outskirt of Bayji
(photo credit: REUTERS)
Advertisement
Two senior US administration officials confirmed on Monday in a Bloomberg report that the Taqqadum military base in Anbar, Iraq that is being used to train local forces to fight back against ISIS is also being occupied by Iranian Shiite militia groups brought in by the Iraqi government that are known to have killed American soldiers. Some members of the US administration fear that sharing the base is endangering the lives of American soldiers as the US intelligence community expressed fear that the Iranians are spying on US military operations.  The League of the Righteous, a Shi'ite militia group that carried out a road side execution of five US soldiers in 2007, is among the Iranian militia groups found on the base. The group still brags about the executions and defends its actions, praising the number of Americans they managed to kill during the war. American officials are critical of this cooperation and feel it is an insult to the  soldiers who fought against the very same militias during the 10-year conflict in Iraq. “It’s an insult to the families of the American soldiers that were wounded and killed in battles in which the Shia militias were the enemy,” Senate Armed Services Chairman John McCain told Bloomberg. “Now, providing arms to them and supporting them, it’s very hard for those families to understand.”While the United States is not directly training or arming the tens of thousands of volunteers for the fight against ISIS, they are flying air support missions for the group. Officials believe the cooperation with known terrorist groups can be seen as unavoidable under the circumstances, as the US marshaled Iraqis to train to fight against the Islamic State. However, the officials do agree that this collaboration could work against the American interests in the long run. The number of Shi'ite militia men occupying the base is unclear. One official reported the presence of just a few representatives and another reported hundreds of men who have been using the base as a center of operations. Despite the formal assurances from the Iranian government that the Shi'ite militias would not interfere with the American military operations, American officials remain skeptical that the Iranian government really exerts any control over the militia groups. “There’s no real command and control from the central government,” one senior administration official said. “Even if these guys don’t attack us … Iran is ushering in a new Hezbollah era in Iraq, and we will have aided and abetted it.”