Attacks may not change EU’s critical posture toward Israel over its aggressive national security measures, this despite all the Israeli pronouncements that France and Israel now face same threats. 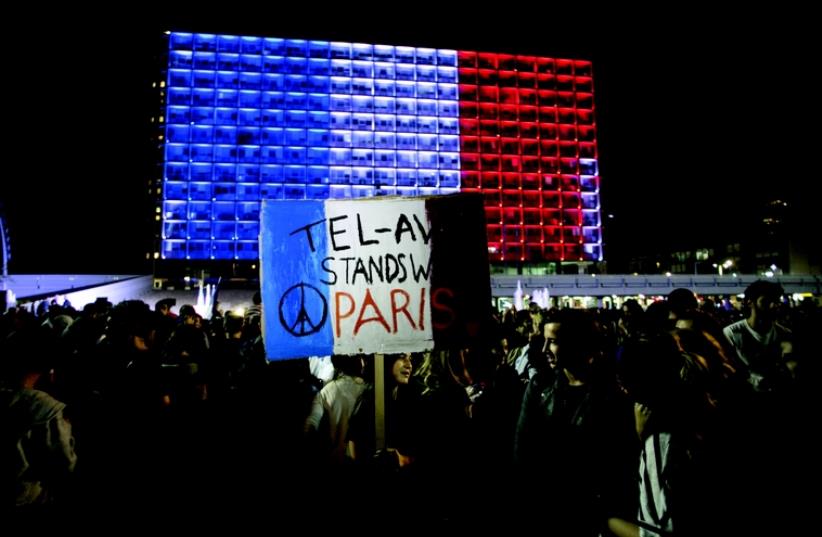 Manifestation de solidarité à Tel-Aviv
(photo credit: REUTERS)
Advertisement
The France that existed last week no longer exists.French President Francois Hollande’s announced war on Islamic State is not limited to air strikes on the terrorist group’s positions in Syria. Rather, he announced an intent to amend France’s constitution to create a larger period of national emergency, which will be easier for the government to invoke, shifting the national security versus civil liberties balance hard toward national security.There are reports that France has already administratively detained over 100 people and will open its social and other electronic networks to much more aggressive surveillance by security services.France is also purportedly moving toward profiling tactics, revoking citizenship and other aggressive measures regarding its citizens who have visited Syria, particularly any who fought with rebel groups.All of the above sound familiar to Israeli citizens as measures that the government has employed during the recent wave of violence and in past waves of violence.In the past, these measures by Israel have faced a torrent of criticism from most EU countries as being anti-democratic and draconian.Will the shock of the Paris attack and France’s adoption of many of these measures give Israel more of a free pass in this area, dampening EU criticism of its use of such tactics in the name of national security? Although it is too early to say for certain, initial speculation by European experts in the laws of war and national security issues indicates that shifts in France will not bring Israel more sympathy for its aggressive national security measures.Why? One reason is that Israel is still perceived as going further then France, including using “moderate physical pressure” or “enhanced interrogation measures” to get information from detainees – measures that are not on the public agenda in France.One expert said that “France has decided to respond to the attacks in an armed conflict mode, which in my view can be considered as lawful.”He added, “This does not involve a justification of certain ‘aggressive’ practices dealing with persons, such as enhanced interrogations practices. Torture is prohibited both under the law of armed conflict and human rights law.”Asked if Israel would get greater sympathy for its tactics, he said: “I do not think so.” He trusts “that France and other European states, as the case might be, will not engage” in practices he considers prohibited by human rights law, practices he thinks Israel is guilty of.Another expert stated that while she thought there might be an increase in profiling [not necessarily based on race] and associated stop and search, she does not believe that France would adopt the tactics for which they have been critical of Israel.The expert said that there is a strong feeling that if a country engages in “enhanced interrogation” or changes its core values, Islamic State wins.Partially due to that, she does not think that France would change its attitude toward Israel adopting these tactics.From the Israeli perspective, the discrepancy, if the experts’ views are correct, may simply be due to France not having faced an ongoing terrorist threat as long as Israel has, or it may be due to the same general reasons that Israel believes it faces bias from the EU.But the bottom line is that the Paris attacks may not change the EU’s critical posture toward Israel over its aggressive national security measures, this despite all the Israeli pronouncements that France and Israel now face the same terrorist threats.