How does all of this impact the Iran nuclear deal and the nuclear threat Tehran poses to Israel?

By YONAH JEREMY BOB
APRIL 23, 2018 07:20
NORTH KOREA’S leader Kim Jong Un gestures beside the newly developed intercontinental ballistic rocket Hwasong-15, in an undated photo released by North Korea’s Korean Central News Agency in November.
(photo credit: REUTERS)
Advertisement
North Korea’s Kim Jong-un took the world by surprise again this past weekend.While US President Donald Trump was musing that he might cancel the planned meeting with Kim, the North’s dictator went public with a commitment to halt all nuclear testing and to take apart his country’s nuclear test site.How does all of this impact the Iran nuclear deal and the nuclear threat Tehran poses to Israel?There are at least three models for approaching the current dance between Washington and Pyongyang.• Model one: Start with a focus on the Iran nuclear deal and look at how North Korea has been impacted by the framework that deal has created.Some have said that because the deal has so many holes in it and because it recognized Iran’s “right” to enrich uranium, Kim has been encouraged not to negotiate for more than a year, meanwhile nailing down as many nuclear capabilities as possible.Seeing that Iran’s aggressiveness paid off, North Korea felt it could be even more aggressive and has ended up with even more nuclear abilities as a result.Some have also said that Trump’s toying with the idea of walking away from the deal undermined any chance of North Korea considering negotiations with an unreliable partner that would renege on its agreements.This seemed a possibility until the current flurry of diplomacy.However, if Kim and Trump reach a deal on denuclearization – a huge if – many observers might take an opposite reading: that Pyongyang saw the benefit Iran got from cutting a deal, thereby encouraging the North to negotiate. 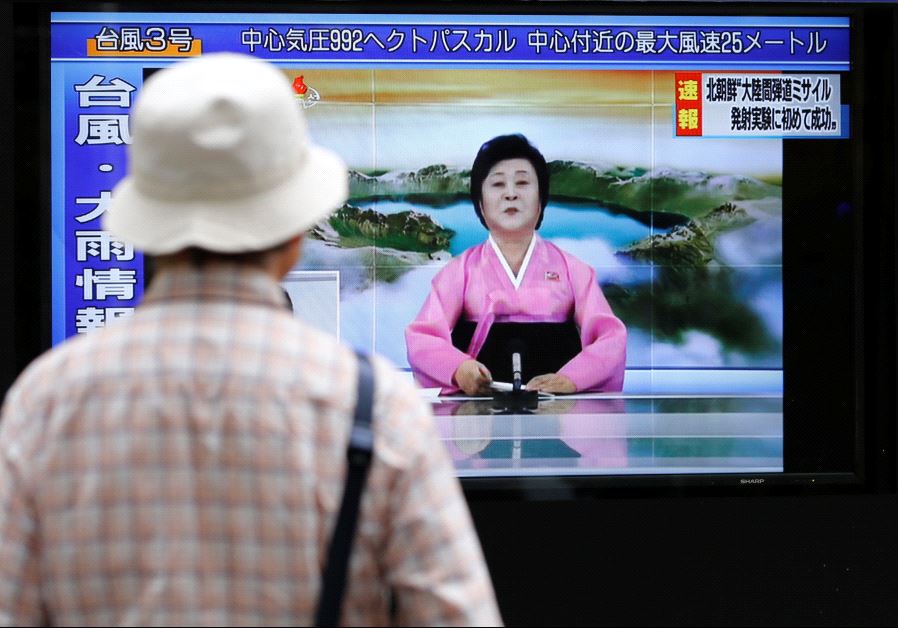 A man looks at a TV showing news of North Korea firing a ballistic missile in Tokyo, July 4 2017.(REUTERS/TORU HANAI)• Model two: Focus on Trump and the future.Maybe North Korea did not care a huge amount about the Iran nuclear deal. Maybe it was focused simply on how Trump would treat the country and whether there was a risk that he would attack.That – combined with Trump’s success in imposing new sanctions on Pyongyang – might have been what brought Kim to the table.While Trump has talked seriously about striking North Korea, he has not really talked about striking Iran. So maybe the two cases are separate and unrelated.Kim Jong Un attends a grand military parade celebrating the 70th founding anniversary of the Korean People's Army in Pyongyang, in this photo released by North Korea's Korean Central News Agency (KCNA/REUTERS)• Model three: All of the talk from the North is a show.Many observers say Kim went about as far as he would go this past weekend and he has no intention of full denuclearization.According to the US, full denuclearization would mean the North handing over all of its existing nuclear arsenal, all of its uranium and plutonium, and irreversibly disassembling all of its nuclear facilities.Even those who think Kim might have a theoretical interest in full peace believe he will not implement full denuclearization until the US first grants peace and normalization.Also, Kim views denuclearization as including the removal of US military forces from South Korea, making a North Korean nuclear capability less necessary.The chance of the US front-loading rewards and hoping Kim keeps his word afterward have been low in all US administrations. That chance is practically nonexistent under the tough-bargaining Trump.
Iran tells Trump he would regret dropping nuclear deal, April 9, 2018 (Reuters)
Others think this is a ploy by Kim to reduce support for sanctions and to widen strategic gaps in alliances between the US and other countries that pressure North Korea. They say Kim will milk the process for all its worth, make easily reversible concessions only and then walk away – just as North Korea has done repeatedly when it promised denuclearization.If North Korea pulls this off without suffering any major consequences from the US and the world, the clear message to Iran would be to continue to milk the nuclear deal for whatever economic and diplomatic benefits it can get and then walk away the second the deal is no longer useful.A deal with North Korea is unlikely. However, if there is one, a weak agreement would strengthen Iran’s hand in demanding that no changes be made in its nuclear arrangement. But a strong deal – with concessions from the North to South Korea and to the US – might strengthen Trump’s hand and pressure Iran into fixing the deal’s weaknesses.There are innumerable scenarios for how things could play out. What is most important for Israel is that the US comes out of negotiations looking tough on North Korea, or that it convinces Pyongyang to make real, irreversible concessions.Only those kinds of outcomes are likely to give Israel and the US a stronger hand in dealing with the Iranian nuclear issue.