“The recapture of Mosul will herald another beginning, not an end to radicalism, extremism and violent sectarianism.” 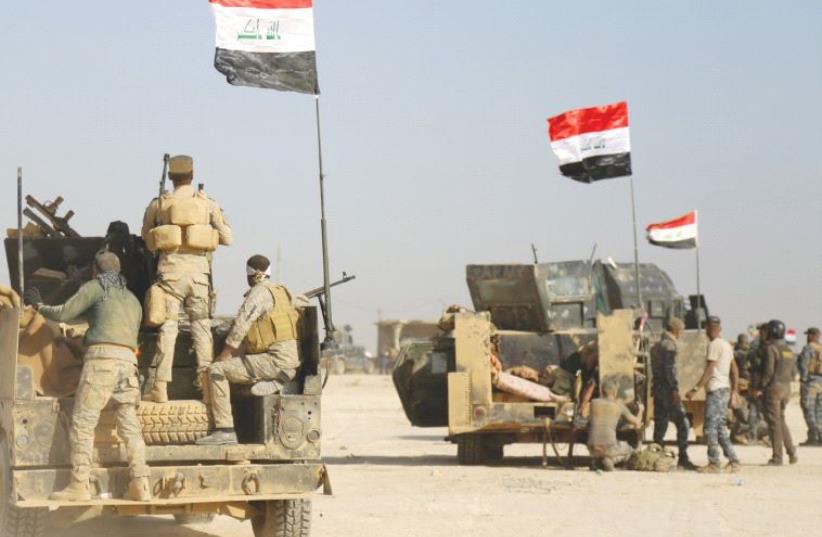 IRAQI FORCES advance in Qayara to attack Islamic State in Mosul
(photo credit: REUTERS)
Advertisement
It is tempting to cheer the Iraqi army on as it enters the third day of its campaign to recapture Iraq’s second largest city, Mosul from Islamic State.But on reflection, the recapture of Mosul – and especially its possible aftermath – could prove to be a lot more complicated than simple eradication of villainous terrorists in their lair by the good guys.If anyone doubted this, they should read an Amnesty International Report issued yesterday that outlines “appalling abuses” by the Iraqi army and its allied Shiite militias, the Iranian-backed Popular Mobilization Forces against Sunni Arabs after they recaptured Falluja, al-Sharqat, Hawija and other areas from ISIS.Amnesty International’s research revealed war crimes and other gross human rights violations by the predominantly Shia militias and also possibly government forces during the operations to retake the Falluja area in June. In one incident Amnesty said was not an isolated one, militias seized about 1,300 men and older boys who fled Saqlawiya, north of Falluja. More than 600 of them were later transferred to the custody of local officials bearing torture marks.According to an investigative committee set up by the local governor another 643 were missing. Forty nine people were known to have been killed – either shot dead or burned or tortured to death, the committee found. Survivors said they were told that their treatment was revenge for an IS massacre of Shiite cadets.According to Philip Luther, Amnesty’s research and advocacy director for the Middle East, Iraqi failure to seriously investigate allegations of torture, enforced disappearances and extrajudicial executions “will allow a vicious cycle of abuse, repression and injustice to continue and raises serious fears about the safety of civilians still in Mosul.”The Iranian-backed Shiite militias have cooperated closely with Iraqi government forces, including a growing number of joint operations. But Iraqi leaders say they will not be given a role this time around in the actual recapture of Mosul. However given their clout and that of their backers in Tehran it is not at all clear that the disclaimer can be taken at face value.“I wouldn’t be surprised if they participate,” says Ephraim Kam, senior researcher at the Institute for National Security Studies.“The Iranians want to be perceived in Iraq as those who saved Iraq from ISIS.”Nadim Shehadi, director of the Fares Center for Eastern Mediterranean Studies at the Fletcher School of Law and Diplomacy in Massachusetts, notes that similar assertions that the militias would not participate were voiced before the Falluja operation. “I hope we can believe these statements. But if you are sitting in Mosul you wouldn’t believe it because you’ve seen what happened in Falluja and Ramadi.”“I don’t want to predict massacres but people in the city would fear the worst and believe the mobilization units are coming to massacre them,” he said.Saudi foreign minister Adel Jubair was quoted by Asharq al-Awsat newspaper Monday as saying “We fear the entry of mobilization militias into Mosul will cause a bloodbath.”Shehadi believes it is a mistake for the Iraqi army to enter Mosul now. “In the present condition, with the relationship between the Iraqi army and the mobilization units unclear, they shouldn’t go into Mosul. There is no gain in destroying Mosul.”He warns extremists on both sides will gain-the Iranian backed militias will become stronger and also ISIS will eventually emerge strengthened in reaction to what the militias do to the Sunni population. A main reason ISIS gained strength to begin with was because of the persecution of the Sunni population by the Iraqi government and the Shiite militias, he says.“This is not a tactical operation where you score by destroying a city and you declare victory,” Shehadi said. “The vision should be to fight radicals on both sides and not collaborate with one set of radicals to fight another and end up strengthening both.”To be sure, the militias are itching for a role in the fighting. As reported on the New Arab website, the leader of the Iranian-backed Assaib Ahl ul-Haq militia, Qais Khazaali sought to rev up his followers for bloodletting against Sunnis. Khazaali declared that the Mosul battle will be an opportunity to exact “revenge and retribution against the killers of [the grandson of the Prophet Mohammed] Hussein,” namely the Sunnis.Tallha Abdulrazaq, a researcher at the University of Exeter’s Strategy and Security Institute, argued in a commentary for the New Arab that “the Mosul operation can be seen as the Iraqi authorities recapturing the city and not liberating it, as what will happen is the city will simply change hands from one repressive regime to another.“The recapture of Mosul will herald another beginning, not an end to radicalism, extremism and violent sectarianism.”