Why did Syria, Hezbollah bus ISIS fighters near Iraq? 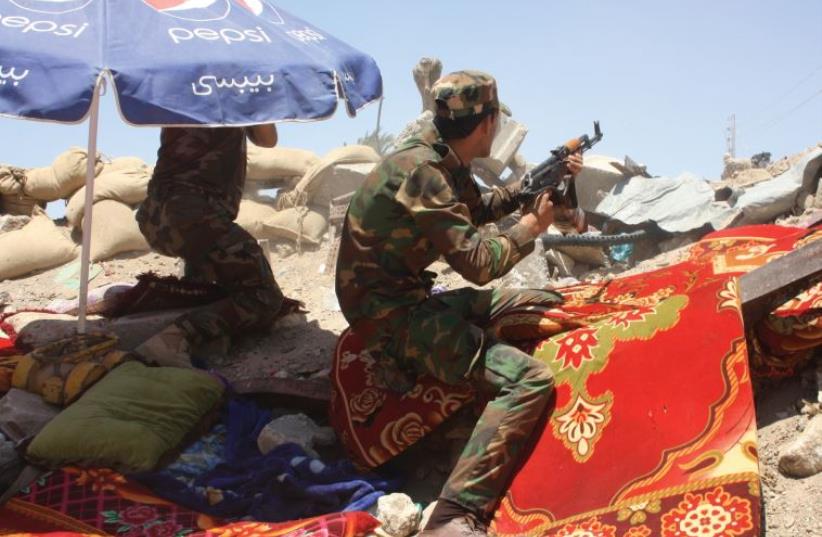 Kata’ib Hezbollah fighters respond to ISIS firing on their position, Huseybeh al-Sharqiya, Anbar Province, June 13.
(photo credit: JONATHAN SPYER)
Advertisement
In 2009, before the Syrian civil war, a bus ride from Homs to Deir al-Zor on the Euphrates River would take around five or six hours. There was a stop for refreshments just outside of the historic city of Palmyra. Now fighters from Islamic State are taking that bus route.Under an agreement with the Syrian regime they are being evacuated from the pocket they have held on the Lebanese-Syrian border for several years to areas ISIS controls near the Euphrates Valley between Deir al-Zor and Albukamal on the Iraqi border.The victory over ISIS during a joint offensive by the Syrian regime, Hezbollah and the Lebanese Army, and ISIS’s decision to evacuate, was trumpeted by Hezbollah leader Hassan Nasrallah on Monday. In a speech he attacked Israel and the United States, claiming that Hezbollah’s war against ISIS was a “continuation of the campaign against Israel.”According to Reuters the ISIS convoy included 308 ISIS members with their small arms and 331 civilians. As part of the agreement ISIS agreed to tell the Lebanese government about the whereabouts of nine Lebanese soldiers the extremists captured in 2014.These kinds of deals, in which Syrian rebel fighters have been evacuated and the regime allowed to take control of areas they held, have become a common feature of the Syrian civil war. For instance in December 2016 thousands were evacuated from besieged Aleppo to Idlib province, which is held by the rebels. This marks the first time an agreement has been made with ISIS to let its men evacuate.Jonathan Spyer, director of the Rubin Center for Research in International Affairs at the Interdisciplinary Center Herzliya, says that it is not surprising that the regime has extended its practice of allowing Syrian rebel groups to evacuate areas under cease-fire agreements.“In my view ISIS doesn’t fundamentally belong to another category to other Sunni fighters. So maybe the regime doesn’t think so either, but it confirms what’s urgent for the regime is in western Syria, and eastern Syria is less of an urgent priority.”Spyer also argues the move may be related to the upcoming post-civil war period. “It [the battles around Qalamoun] had already dragged on for ages. It may well be that in a context where ISIS is set to be destroyed as a quasi-sovereign entity further east, Hezbollah and Lebanon are trying to preempt any new ISIS focus closer to them.”In Iraq the decision to transport ISIS gunmen to eastern Syria has been criticized as dumping the fighters on Iraq’s doorstep. Muhammad al-Karbouli, a member of Iraq’s Security and Defense Committee in parliament, was quoted by Al-Sumaria TV as condemning the decision. He said the Iraqi government should investigate the “mysteries” and “secrets” of the deal as to why ISIS fighters might then be able to cross into Iraq via Abu-Kamal on the border into the area of al-Qaim and terrorize Iraq, bolstering some 3,000 ISIS fighters he claimed were in that area of Anbar province.Another Iraqi politician was quoted as saying “the blood of our youth and our people is not cheaper than the blood of the Lebanese.”In a statement to the press on Tuesday posted on Twitter, Iraqi Prime Minister Haider al-Abadi said the transfer was unacceptable.The Iraqi media appear to be suggesting that the Hashd al-Shaabi, a collection of Shia militias that, like Hezbollah, are close to Iran, should have objected to the transfer. There was also discussion of whether the US-led coalition should have struck the convoy, since it includes armed ISIS fighters.Questions remain about whether the ISIS fighters will end up near Deir al-Zor or Al-Bukamal. Assad forces are advancing on both places, and it seems that the fighters will end up fighting the same regime that has just allowed them transit through its areas.The US-led coalition did not respond by press time to a query about its reaction to the movement of the ISIS fighters and families.