Israel and India are locked in a tight embrace, says ‘Hindustan Times’ columnist. 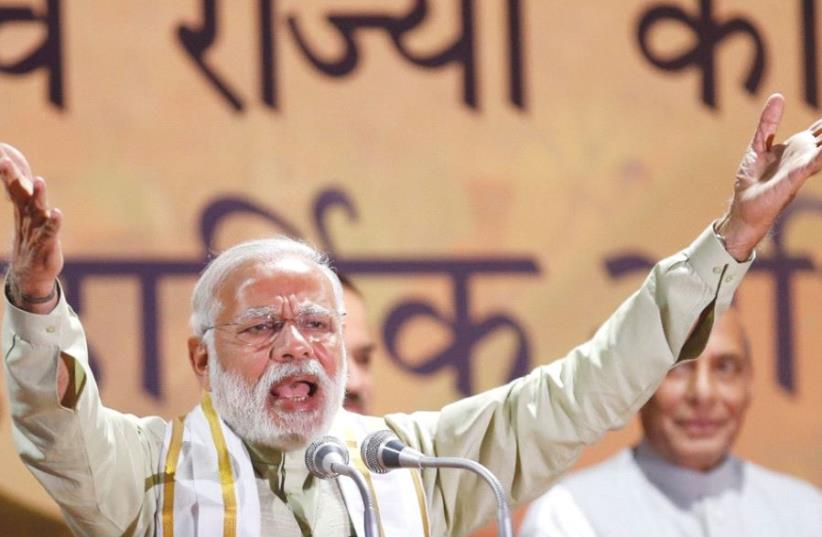 INDIA’S PRIME MINISTER Narendra Modi addresses supporters at BJP headquarters in New Delhi on March 12.
(photo credit: REUTERS)
Advertisement
Indian Prime Minister Narendra Modi’s planned visit to Israel this summer, the first by an Indian head of state, has not led to any protest from the Arab world, according to Bobby Ghosh, editor-in-chief of the mass circulation Hindustan Times.Ghosh wrote in a column in his paper on Tuesday that no Arab state has voiced displeasure at the visit, either publicly or through diplomatic back channels.What is astonishing, he wrote, “is the absence of even a murmur of protest from India’s friends in the Arab world. West Asian diplomats quizzed by my colleagues at [the] Hindustan Times have shrugged off the idea of Modi’s visit as a matter of realpolitik. One expressed the mild hope that the PM might also visit the West Bank to show some solidarity with the Palestinians, but acknowledged that this is unlikely.”While Prime Minister Benjamin Netanyahu said during his recent visit to Singapore that Modi will visit in the summer, no date has been announced. There is some speculation the visit will take place on his way back to India following a meeting of the G20 economic leaders in Hamburg in July.Modi’s visit will be the most significant sign to date of the strong and growing ties between the two countries.Ghosh wrote that if someone would have told him in the 1970s or 1980s that an Indian premier would one day make an official visit to Israel, “I’d have laughed you out of the room.” But, today, he wrote, the two countries are “locked in a tight embrace of economic, defense and security interests.” According to Defense News, India is now Israel’s largest arms client, while Israel is India’s third-largest weapons provider, after Russia and the US. President Reuven Rivlin made the first visit by an Israeli president to India in two decades in November, reciprocating a visit to Israel a year earlier by India’s President Pranab Mukherjee.India’s Foreign Minister Sushma Swaraj visited in January 2016.
India and Israel agree to join forces to fight terror as Rivlin and Modi meet
Modi’s National Security Adviser Ajit Doval was in Israel for two days at the beginning of the month to lay the groundwork for the Indian premier’s visit.Ghosh wrote that one reason for a lack of concern among Arab governments with India’s friendship with Israel is that “many of them would themselves like an accommodation with the Jewish state.”“For six decades,” Ghosh continued, the “propaganda machines” in Saudi Arabia, Bahrain and most other Arab states “have portrayed the Jewish State as an abomination, and have normalized antisemitism among their citizenry.The rulers of these states cannot now afford to be seen breaking bread with Israel, and so can only play a form of diplomatic footsie – or rely on sympathetic intermediaries to ferry little notes between them.“So, if Modi does hear from Arab rulers before his visit to Israel, it may very well be in the form of requests to convey cautious felicitations.And it’s just conceivable that Netanyahu will want Modi to carry a message for Saudi King Salman, who is expected to visit New Delhi later in the year.”In a related development, the Indian Embassy announced this week that three ships of the Indian Navy will be making a port call in Haifa during the second week of May. The embassy termed this a “goodwill visit” and “one of the events to mark 25 years of diplomatic relations between India and Israel.”