For the first time in years, Gazans enjoy clean seawater

"Today the area is clean and the sea is clean. We felt as if we were in another country," a mother of four told Reuters.

By REUTERS
Palestinian fishermen hold their nets as they walk along a beach during a lockdown amid the coronavirus disease (COVID-19) outbreak, in the northern Gaza Strip September 10, 2020
(photo credit: REUTERS/MOHAMMED SALEM)
Advertisement

The water looks crystal blue, with no trace of sewage, the yellow sand is clean and the smell in the air is salty and pleasant, giving beachgoers in Gaza their first experience in years of clean and safe beaches.

Untreated sewage has flowed directly into the waters off Gaza for years, causing an environmental disaster that has ruined one of the few affordable opportunities for swimming available to people locked in the narrow coastal strip.

This season has been different, as internationally-funded sewage treating facilities across the coastal enclave have stepped up their operations, reducing pollution to its lowest rates in many years, environment officials said.

"We couldn't come before because the sea was polluted and if we did, our children used to come back home with viruses and skin diseases," said Sahar Abu Bashir, 52.

"Today the area is clean and the sea is clean. We felt as if we were in another country," the mother of four told Reuters. 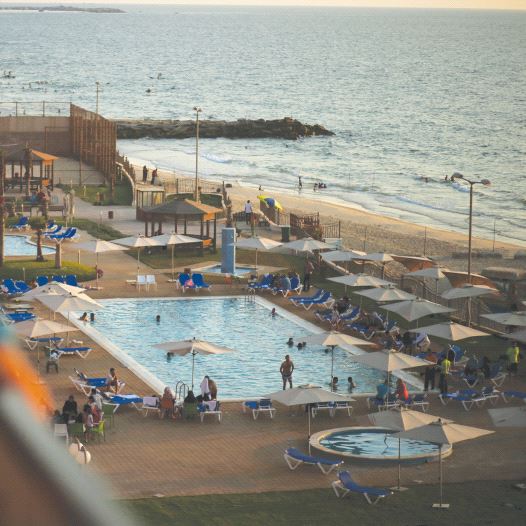 Palestinians are seen at the Blue Beach Resort in Gaza shortly after it opened in July 2015 (credit: MOHAMMED SALEM/REUTERS)

This week, the long sandy beach looked almost empty of red flags warning beachgoers against swimming because of the dozens of millions of cubic meters of untreated sewage that used to pour into the ocean every day.

"We couldn't come before because the sea was polluted and if we did, our children used to come back home with viruses and skin diseases."

People sat round plastic tables at the water's edge, while children played with inflatable rubber bathing rings. In some areas, horse owners gave their animals a cooling sea bath.

The Hamas-run Environment Quality and Water Authority said sewage dumped into the sea was now partially treated, making 65% of the beach safe and clean, with plans to expand it.

"The summer season in Gaza Strip will be relatively safe compared to previous years because of the noticeable improvement of the quality of seawater," said Mohammad Mesleh, director of environmental resources.

Most Palestinians in Gaza can't afford to travel as poverty and unemployment stand at around 50%, according to local and international records.

Citing security concerns with the Islamist group Hamas, which runs the territory, both Israel and Egypt maintain restrictions along their Gaza frontiers.

In Deir Al-Balah, in the southern Gaza Strip, people crowded a beachfront resort called "The Old Nights," built on a hilltop looking down the beach.

His business is booming this season.

"When there is no pollution I will have many customers in my place. That helps me make up for the losses of innovating and getting the place ready for the new year," he said.