As federal Syria idea is floated, Russia says Kurds should have spot at peace talks table

"There are all sorts of different models of a federal structure that would, in some models, have a very, very loose center and a lot of autonomy for different regions," diplomat says. 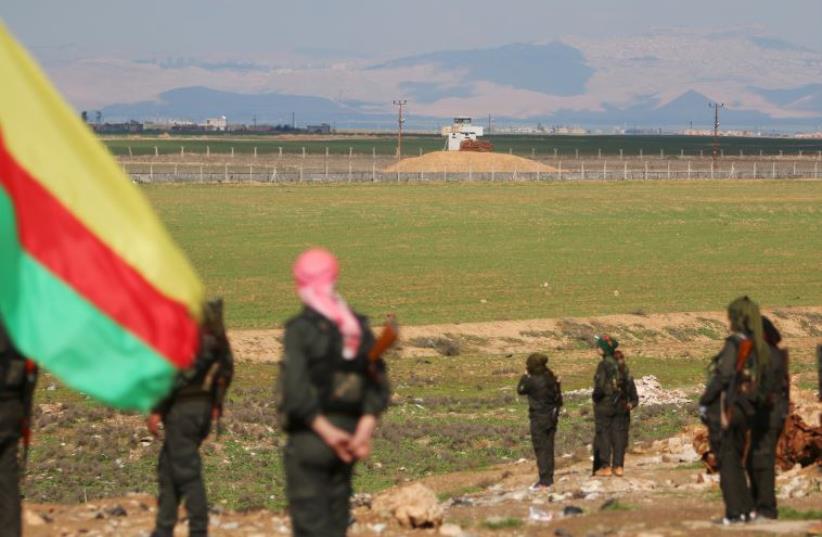 Kurdish members of the Self-Defense Forces stand near the Syrian-Turkish border in the Syrian city of al-Derbasiyah, February 9, 2016.
(photo credit: RODI SAID / REUTERS)
Advertisement
MOSCOW - Russia is convinced that the United Nations peace mediator on Syria Staffan de Mistura should take a decision on including ethnic Kurds in Syria peace talks, Russian Foreign Minister Sergei Lavrov said on Friday.Holding the peace talks without the participation of Kurds would be a "demonstration of weakness" by the international community, Lavrov told a news briefing.  Major powers close to the UN-brokered peace talks on Syria are discussing the possibility of a federal division of the war-torn country that would maintain its unity as a single state while granting broad autonomy to regional authorities, diplomats said.The resumption of Geneva peace talks is coinciding with the fifth anniversary of a conflict that began with protests against President Bashar Assad before descending into a multi-sided civil war that has drawn in foreign governments and allowed the growth of Islamic State militants in Syria and Iraq.Fighting in Syria has slowed considerably since a fragile "cessation of hostilities agreement" brokered by the United States and Russia came into force almost two weeks ago. But an actual peace deal and proper ceasefire remain elusive.As de Mistura prepares to meet with delegations from the Syrian government and opposition, one of the ideas receiving serious attention at the moment is a possible federal division of Syria.Neither the opposition nor government has confirmed its participation in the latest round of peace talks in Switzerland.Speaking on condition of anonymity, a UN Security Council diplomat said some major Western powers, not only Russia, have also been considering the possibility of a federal structure for Syria and have passed on ideas to de Mistura."While insisting on retaining the territorial integrity of Syria, so continuing to keep it as a single country, of course there are all sorts of different models of a federal structure that would, in some models, have a very, very loose center and a lot of autonomy for different regions," the diplomat said.He offered no details about the models of a federal division of authority that could be applied to Syria. Another council diplomat confirmed the remarks.OPPOSITION DISLIKES FEDERALISMThe biggest sticking point in the peace talks remains the fate of Assad, who Western and Gulf Arab governments insist must go at the end of a transition period envisioned under a roadmap hammered out in Vienna last year by major powers. Assad's backers Russia and Iran say Syrians themselves must decide.After five years of civil war that has killed 250,000 people and driven some 11 million from their homes, Syria's territory is already effectively split between various parties, including the government and its allies, Western-backed Kurds, opposition groups and Islamic State militants.This week, Syria's Saudi Arabian-backed opposition rejected a suggestion by Russia, which like Iran supports Assad's government and has intervened militarily on its side, that the peace talks could agree a federal structure for the country."Any mention of this federalism or something which might present a direction for dividing Syria is not acceptable at all. We have agreed we will expand non-central government in a future Syria, but not any kind of federalism or division," Syrian opposition coordinator Riad Hijab said.But the idea of federalism for Syria has not been ruled out. In an interview with Al Jazeera on Thursday, de Mistura said "all Syrians have rejected division (of Syria) and federalism can be discussed at the negotiations."In a September interview Assad did not rule out the idea of federalism when asked about it, but said any change must be a result of dialogue among Syrians and a referendum to introduce the necessary changes to the constitution."From our side, when the Syrian people are ready to move in a certain direction, we will naturally agree to this," he said at the time.The co-leader of Syrian Kurdish PYD party, which exercises wide influence over Kurdish areas of Syria, has made clear the PYD was open to the idea."What you call it isn't important," PYD's Saleh Muslim told Reuters on Tuesday. "We have said over and over again that we want a decentralized Syria - call it administrations, call it federalism - everything is possible."The next round of Syria peace talks is not expected to run beyond March 24. After that round ends, there is expected to be a break of a week or 10 days before they resume.