As ISIS declines, questions arise of the fates of fighter's families

As Islamic State's days of ruling over vast swathes of Iraq come to an end, questions are emerging about what to do with their families. 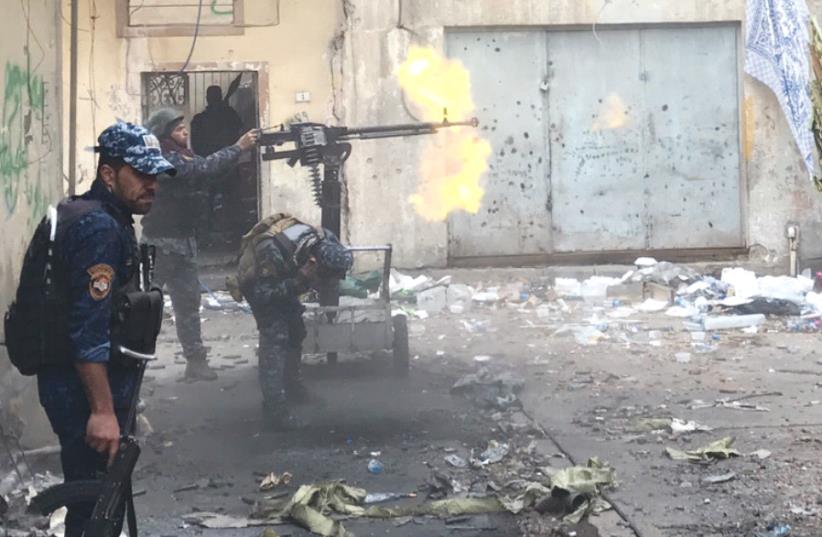 IRAQI SECURITY FORCES battle ISIS terrorists yesterday in western Mosul.
(photo credit: SETH J. FRANTZMAN)
Advertisement
Their husbands, sons and brothers are dead, but the women and children Islamic State militants left behind will live to pay the price for their actions.As Islamic State's days of ruling over vast swathes of Iraq come to an end, questions are emerging about what to do with their families.For now, many of them are effectively imprisoned in a rubbish strewn encampment east of Mosul, where the last people to be displaced from the city have been taken."All the men were killed," said 62 year-old Umm Hamoudi, who fled the Midan district last week with 21 members of her family -- all women and children.Her husband, an Islamic State member, was wounded in the fighting for the Old City. They tried to carry him off the battlefield but he was too heavy, so they said goodbye and left him there to die.Displaced civilians are returning home to rebuild their lives, but those who suffered three years of extreme violence and privation under Islamic State say the militants' relatives have no place among them.Leaflets threatening militants' families have appeared in areas retaken from Islamic State, and vigilantes have thrown grenades at their homes."Revenge is not a cure," said Ali Iskander, the head of the Bartella district where the camp is located. "These families should undergo rehabilitation courses"Local authorities in Mosul recently issued a decree to exile Islamic State families to camps so they can be rehabilitated ideologically.But rights groups say collective punishment undermines the prospects for reconciliation after Islamic State, and risks fostering a generation of outcasts with no stake in Iraq."If we isolate them, how will we bring them back into the fold of the nation?" said a local official visiting the camp on Saturday. "They will become Daesh."Umm Hamoudi's daughter was only 14 years old when her father married her off to an Islamic State militant.He too was killed around one year ago while the girl was pregnant with her first child, who lay sleeping on the floor of the tent, oblivious to the stigma that will likely cloud the rest of his life.Umm Suhaib, 32, last heard from her husband two months ago. "He is certainly dead," she said, showing no emotion.She threatened to leave him when he joined Islamic State around one year after the group took over, but did not because of their four children.A devout Muslim, her husband was seduced by the idea of a modern-day caliphate, and offered his skills as an engineer in service of Islamic State's state-building project. He came to regret his decision, Umm Suhaib said, but by then it was too late. "He wasted his life and threw ours away with it," she said. "We are lost now."Like other women whose male relatives joined Islamic State, Umm Suhaib said she was powerless to stop him."I have no authority over them," 50 year-old Fatima Shihab Ahmed said of her two brothers who joined the group. She believes one of them is still alive in the militant-held city of Tel Afar, which Iraqi forces plan to assault next.Ahmed is also a suspect herself: a neighbor's son accused her of working for Islamic State's morality police known as the Hisba, which punished women who broke the militants' strict dress code. She denies it.None of Umm Yousif's close male relatives joined Islamic State, she said. She was separated from her wounded husband as they fled the Midan district last week and believes he was taken to a hospital after being screened by Iraqi security forces for links with the militants."Maybe he is dead. Perhaps he is alive," she said, pleading to be allowed out of the camp so she could look for him."They say 'you are all Daesh', but we are not. Even if we were, what is it to do with women and children? Each person is responsible for himself."