Islamic State claimed responsibility for the attack, according to Amaq, a news agency that supports Islamic State. 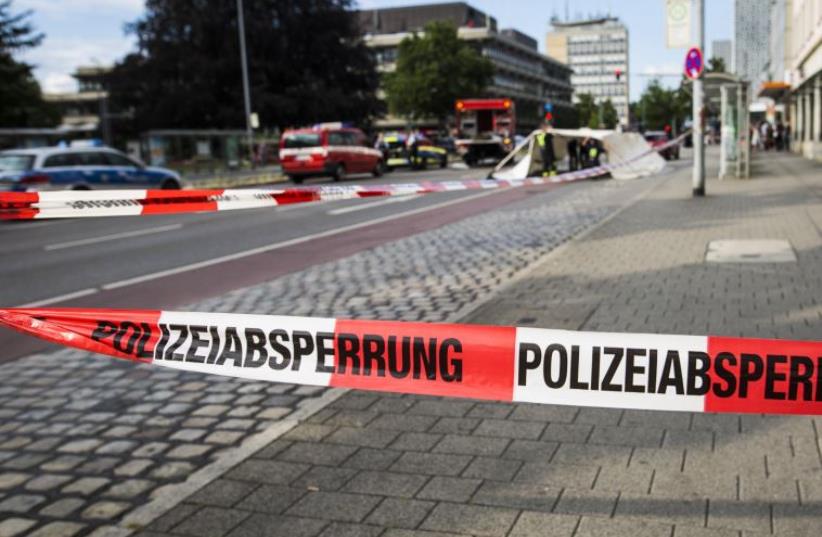 A police line is seen near the site where a Syrian asylum-seeker killed a woman and injured two people with a machete, on July 24, 2016 in Reutlingen, southern Germany.
(photo credit: CHRISTOPH SCHMIDT / DPA / AFP)
Advertisement
ANSBACH, Germany -The Syrian who blew himself up in southern Germany, wounding 15 people, had pledged allegiance to Islamic State on a video found on his mobile phone, the Bavarian interior minister said on Monday."A provisional translation by an interpreter shows that he expressly announces, in the name of Allah, and testifying his allegiance to (Islamic State leader) Abu Bakr al-Baghdadi ... an act of revenge against the Germans because they're getting in the way of Islam," Joachim Herrmann told a news conference."I think that after this video there's no doubt that the attack was a terrorist attack with an Islamist background."Islamic State claimed responsibility for the attack, according to Amaq, a news agency that supports Islamic State.The attack, outside a music festival in Ansbach, a town of 40,000 people southwest of Nuremberg that has a US Army base, was the fourth act of violence by men of Middle Eastern or Asian origin against German civilians in a week.The 27-year-old arrived in Germany two years ago and claimed asylum, a federal interior ministry spokesman said. He had been in trouble with police repeatedly for drug-taking and other offenses and faced deportation to Bulgaria.The incident, after three other attacks since July 18 that left 10 people dead and dozens injured, will fuel growing public unease about Chancellor Angela Merkel's open-door refugee policy. More than a million migrants entered Germany over the past year, many fleeing war in Afghanistan, Syria and Iraq.Federal Interior Minister Thomas de Maiziere said no decision would be made on changing asylum or immigration rules until investigations into the recent incidents are finished."Of course I would and will initiate appropriate amendments if they are necessary or if I think they are necessary, but only then," he said.Germany's federal and state security authorities have more than 400 leads on fighters or members of Islamist organizations among refugees in the country, the BKA federal police said.THREE OTHER CASESThe suicide bomber had been denied entry to the Ansbach Open music festival shortly before detonating the bomb outside a restaurant, Herrmann said. More than 2,000 people were evacuated from the festival after the explosion, police said.Herrmann told Reuters the recent attacks raised serious questions about Germany's asylum law and security nationwide. He planned to introduce measures at a meeting of Bavaria's conservative government on Tuesday to strengthen police forces, in part by ensuring they have adequate equipment.It was the second violent incident in Germany on Sunday and the fourth in the past week, including the killing of nine people by a deranged 18-year-old Iranian-German gunman in the Bavarian capital Munich on Friday.Earlier on Sunday, a 21-year-old Syrian refugee was arrested after killing a pregnant woman and wounding two people with a machete in the southwestern city of Reutlingen, near Stuttgart.A week ago a 17-year-old youth who had sought asylum in Germany was shot dead by police after wounding five people with an axe near Wuerzburg, also in Bavaria. He was initially thought to be Afghan but federal Interior Minister Thomas de Maiziere has since said he may have been from Pakistan.Police said neither Sunday's machete attack nor Friday's shooting in Munich bore any sign of connections with Islamic State or other militant groups.Islamic State claimed responsibility for the Wuerzburg attack as well as the July 14 rampage in the French Riviera city of Nice in which a Tunisian man drove a truck into Bastille Day crowds, killing 84 people.