Parliament is expected to pass the proposal to introduce a "newcomers statement" in the next few months, according to a government spokesperson. 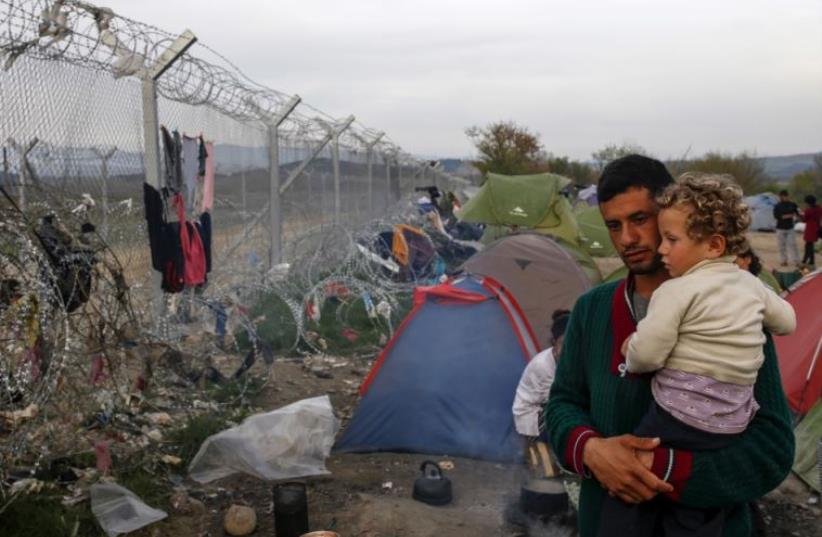 A man with a child looks at the border fence at a makeshift camp for migrants and refugees at the Greek-Macedonian border
(photo credit: REUTERS)
Advertisement
Non-EU migrants wishing to live in Belgium will have to sign a statement declaring their acceptance of local values or see their residency claim rejected, a government official said, in a move campaigners fear will fuel anti-immigrant sentiment.Parliament is expected to pass the proposal to introduce a "newcomers statement" in the next few months, according to a spokesman for Belgium's secretary of state for asylum and migration, Theo Francken, who drafted the plan.People moving to Belgium for more than three months would have to sign the statement which includes a pledge to prevent and report any attempts to commit "acts of terrorism." The statement would not apply to asylum seekers and students, the spokesman said."(Many people) are coming (to Belgium) from countries with other values," Francken's spokesman Laurent Mutambayi told the Thomson Reuters Foundation by telephone from Brussels."If they want to build their life here in Europe (we have) no problem with that but they have to sign this statement that they accept our values," he added.Mutambayi said those who are not deemed to be integrating sufficiently will not be allowed to stay in the country.The question of integration has dominated news headlines in Europe which received more than 1 million people last year fleeing conflict and poverty in the Middle East and beyond.Mutambayi said last month's suicide bombings at Brussels Airport and on a metro train which killed 35 people reinforced the argument for the integration statement.Islamic State claimed responsibility for the attacks. One of the Belgian organizations working with migrants criticized the proposal saying it was discriminatory and would fuel prejudice towards migrants."It's an extra tool for the immigration office to keep some people out of Belgium," said Didier Vanderslycke from ORBIT, an organization working on diversity and migration."The integration process can start when you have the residence and not when you sign a document that you will integrate. It's really a bad thing as a welcome (for) people," he told the Thomson Reuters Foundation.He said making would-be residents sign a declaration accepting gay rights or equality between men and women suggested that these values were not held by immigrants, and would deepen prejudice against them.