Berlin 'dismayed and furious' over murder of German women in Egypt

An Egyptian man stabbed the two German tourists to death and wounded at least four others on Friday at a popular seaside vacation spot on the Red Sea, officials and witnesses said. 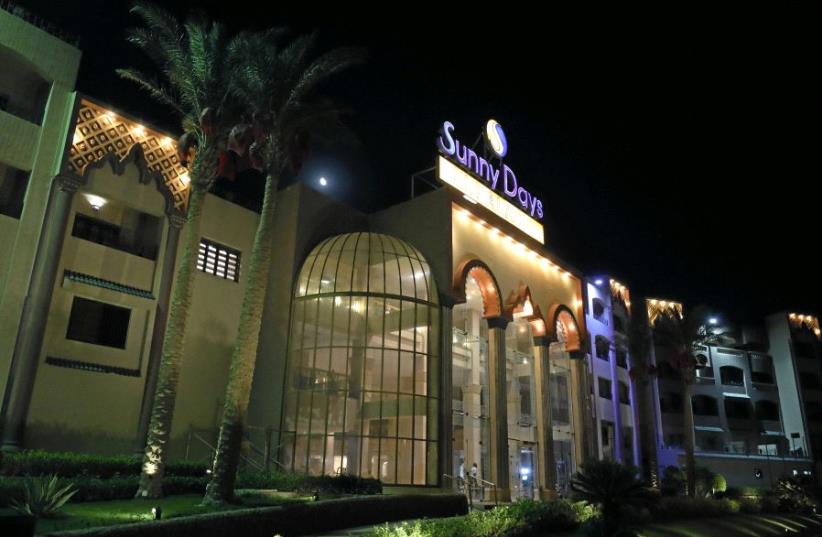 A general view shows the Sunny Days El Palacio resort where a knife attack took place, in Hurghada, Egypt, July 15, 2017
(photo credit: REUTERS/MOHAMED ABD EL GHANY)
Advertisement
HURGHADA, Egypt/BERLIN - German officials said on Saturday they had been left "dismayed and furious" by the stabbing of two German women at an Egyptian beach resort, calling it a deliberate attack on foreign tourists.
An Egyptian man stabbed the two German tourists to death and wounded at least four others on Friday at a popular seaside vacation spot on the Red Sea, officials and witnesses said.
The knifeman killed the two German women and wounded two other tourists at the Zahabia hotel in Hurghada, then swam to a neighboring beach to attack at least two more people at the Sunny Days El Palacio resort before being caught by staff and arrested, officials and security sources said.
It was the first major attack on foreign tourists since a similar assault on the same resort more than a year ago, and comes as Egypt struggles to revive a tourism industry hurt by security threats and years of political upheaval.
"We now have the sad certainty that two German women were killed in the attack in Hurghada," a German Foreign Ministry spokeswoman said.
"According to what we know, the act was a deliberate attack on foreign tourists - a particularly devious and criminal act that leaves us sad, dismayed and furious," she added.
Sources close to the investigation told Reuters the attacker was taken to Cairo for questioning by prosecutors after officers from Egypt's domestic security agency conducted an initial inquiry.
The suspect, from a village in the southern Kafr al-Sheikh province, arrived in Hurghada at 5 a.m. on Friday in a public bus and waited until shops opened before buying a knife, the sources said.
He then bought a ticket for 100 Egyptian pounds ($5.60) to enter a beach where he killed the two German tourists and injured two others before jumping over a wall, swimming to the neighboring beach and carrying out more stabbings.
GREATER SCRUTINY
Police questioned the shop owner who sold the attacker the knife but later released him. The knife was found in the water by divers, a source in the Sunny Days El Palacio resort said.
One wounded woman was airlifted to a hospital in Cairo due to the seriousness of her injuries. Sources did not specify her nationality.
Zahabia hotel's beach was sealed off and placed under the control of security forces. Authorities ramped up security measures in Hurghada and are applying greater scrutiny with regards to letting Egyptians enter hotels.
A security official at the El Palacio hotel told Reuters two of the injured were Czech and two Armenian, but other officials said one of the women was Russian. They were being treated at a local hospital. The Czech Foreign Ministry tweeted that one Czech woman had sustained a minor leg injury.
The attacker's motive was still under investigation, the Interior Ministry said.
Egypt is fighting Islamist insurgents in the Sinai Peninsula, where they mainly target security forces, but militants have also attacked tourist targets in the past, as well as Coptic Christians and churches.