Car bomb kills four, injures more than 65 in second such incident in Lebanese capital in less than a week.

By REUTERS
The site of a blast in Beirut's southern suburbs.
(photo credit: REUTERS/Jamal Sahili)
Advertisement
BEIRUT - A car bomb killed four people in Hezbollah's southern Beirut stronghold on Thursday, security and medical sources said, the latest in a series of deadly attacks on Shi'ite and Sunni targets in Lebanon.Several cars were destroyed by the force of the blast, their blackened and twisted frames smouldering on the street in front of buildings whose facades were also torn off by the explosion.Health Minister Ali Hassan Khalil said four people were killed and 66 wounded, according to preliminary figures. A security source said the blast was caused by a car bomb. 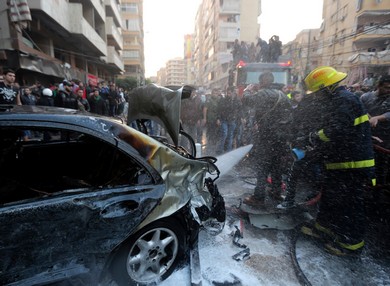 The explosion occurred less than a week after former finance minister Mohamad Chatah, a vocal critic of the Shi'ite Hezbollah militant group and its ally Syrian President Bashar Assad, was killed along with six other people by a car bomb in central Beirut.Last summer, bombs exploded in the southern Beirut stronghold of Iranian-backed Hezbollah and outside two Sunni Muslim mosques in the northern city of Tripoli, killing scores of people. Bombers also struck the Iranian Embassy in southern Beirut in November.The violence has been fueled by sectarian tensions over the conflict in neighboring Syria, where Assad is fighting Sunni Muslim rebels battling to overthrow him. Assad is from the minority Alawite sect, an offshoot of Shi'ism.Hezbollah has sent fighters to join Assad's forces, while Lebanese Sunni Muslim fighters have supported the rebels."(Terrorism) is being directed towards all people. It is being directed to create sectarian strife among Lebanese," Khalil told reporters.The bomb struck just after 4 p.m. when the streets of Haaret Hreik district were packed with rush hour traffic. A Reuters Television cameraman said Hezbollah members fired into the air to disperse people, fearing possible subsequent explosions.There was no immediate claim of responsibility for the explosion, which was condemned by both sides of Lebanon's sectarian divide. It was not clear if a specific person was targeted by the bomb.Foreign Minister Adnan Mansour appealed for international support to curb the violence and cut off financial aid and other support for bombers."Everyone must work to curb the sources of terrorism. If not, this whirlpool will envelop everyone. Lebanon is suffering, others are suffering, everyone is suffering," he told Al Arabiya Television