The cleric, who had diabetes and coronary artery disease, had been incarcerated at the Federal Correctional Complex, Butner, for nearly 10 years, according to Greg Norton, a spokesman. 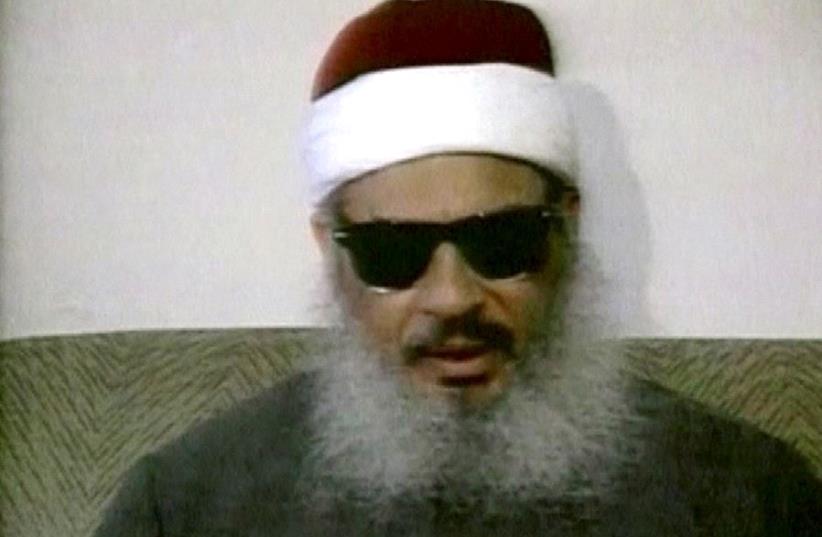 Omar Abdel-Rahman
(photo credit: REUTERS)
Advertisement
Omar Abdel-Rahman, the extremist Muslim cleric known as "the blind sheik" convicted of conspiracy in the 1993 World Trade Center bombing and planning more attacks as part of a "war of urban terrorism" in the United States, died on Saturday in a North Carolina prison, authorities said.
Bombing of the World Trade Center in New York in 1993 (credit: REUTERS)
Abdel-Rahman, 78, died of natural causes at 9:40 a.m. (1440 GMT) at the Federal Medical Center, Butner, part of a federal prison compound in Butner, North Carolina, according to Greg Norton, a spokesman.The cleric, who had diabetes and coronary artery disease, had been incarcerated at the Federal Correctional Complex, Butner, for nearly 10 years, Norton said.Earlier, the cleric's son Ammar said his family had received a phone call in Eygpt from a US representative saying his father had died.The Egyptian-born Abdel-Rahman remained a spiritual leader for radical Muslims even after more than 20 years in prison.With his long gray beard, sunglasses and red and white clerical cap, the charismatic Abdel-Rahman was the face of radical Islam in the 1980s and 1990s. He preached a fiery brand of Islam that called for the death of people and governments he disapproved of and the installation of an Islamic government in Egypt. His following was tied to fundamentalist killings and bomb attacks around the world.Abdel-Rahman, who was born in a village along the Nile on May 3, 1938, lost his eyesight due to childhood diabetes and grew up studying a Braille version of the Koran.As an adult he became associated with the fundamentalist Islamic Group and was imprisoned and accused of issuing a fatwa leading to the 1981 assassination of Egyptian President Anwar Sadat, against whom he had railed for years. The sheik said he was hung upside-down from the ceiling, beaten with sticks and given electric shocks while held but he was eventually acquitted and went into self-imposed exile in 1990.He managed to get to New York after the US Embassy in Sudan granted him a tourist visa in 1990 - despite the fact that he was on the State Department's list of people with ties to terror groups.US authorities blamed a computer error for the visa, but the mistake was compounded in 1991 when Abdel-Rahman was given a green card and permanent US resident status. The New York Times reported the CIA had approved the visa application for Abdel-Rahman, who had supported the anti-Soviet mujahedin in Afghanistan during the 1980s.Abdel-Rahman preached his radical message and lived in the New York City borough of Brooklyn and nearby Jersey City, New Jersey, building a strong following among fundamentalist Muslims. Even in exile, he remained a force in the Middle East, where followers listened to cassette tapes and radio broadcasts of his sermons decrying the Egyptian government and Israel.While in the United States Abdel-Rahman and his disciples would be linked to the 1990 slaying in New York of militant Rabbi Meir Kahane, the 1992 killing of an anti-fundamentalist writer in Egypt and attacks on foreign tourists in Egypt.US authorities took action in 1992 by revoking Abdel-Rahman's green card on the grounds that he had lied about a bad check charge in Egypt and about having two wives when he entered the country. He was facing the possibility of deportation when a truck bomb went off in the basement parking garage of the World Trade Center on Feb. 26, 1993, killing six people and injuring more than 1,000 in an attack that made Americans realize that they were not immune to international terrorism.Four months later Abdel-Rahman was arrested and went on trial with several followers in 1995, accused of plotting a day of terror for the United States - assassinations and synchronized bombings of the UN headquarters, a major federal government facility in Manhattan and tunnels and a bridge linking New York City and New Jersey.The indictment said Abdel-Rahman and his followers planned to "levy a war of urban terrorism against the United States" as part of a jihad - or holy war - to stop US support for Israel and change its overall Middle East policy.The defendants were not directly charged with the 1993 World Trade Center attack but were convicted of conspiring with those who did carry out the bombing.Abdel-Rahman's convictions also included plotting to kill Egyptian President Hosni Mubarak during a visit to the United States in 1993, a Jewish New York state legislator and a Jewish New York State Supreme Court justice.Much of the case against Abdel-Rahman and his followers was based on video and audio recordings made with the help of a bodyguard for the sheik who became an FBI informant. A video also showed four defendants mixing fertilizer and diesel fuel for bombs.After a nine-month trial, the sheik and nine followers were found guilty in October 1995 on 48 of 50 charges.He did not testify at his trial but at a sentencing hearing Abdel-Rahman gave a passionate speech of more than 90 minutes through a translator, proclaiming his innocence and denouncing the United States as an enemy of his faith."I have not committed any crime except telling people about Islam," he said.Abdel-Rahman was still an important figure in radical Islam even after years in prison. A year before his al Qaeda followers pulled off the most destructive assault on US soil, the Sept. 11, 2001, attacks, Osama bin Laden had pledged a jihad to free Abdel-Rahman from prison. When Mohammed Mursi, a leader of the Muslim Brotherhood, began his short-lived presidency of Egypt in 2012, he said winning the sheik's freedom would be a priority and the jihadists who attacked an Algerian oilfield and took hostages in 2013 also demanded his release.In 2006 one of Abdel-Rahman's lawyers, Lynne F. Stewart, was sentenced to 28 months in prison for helping smuggle messages from the cleric to his followers in Egypt.