Commemoration marking 101 years to the Armenian Genocide held in Jerusalem

Commemorative events will be held throughout the world this year under the shadow of the ongoing violence between Armenia and Azerbaijan. 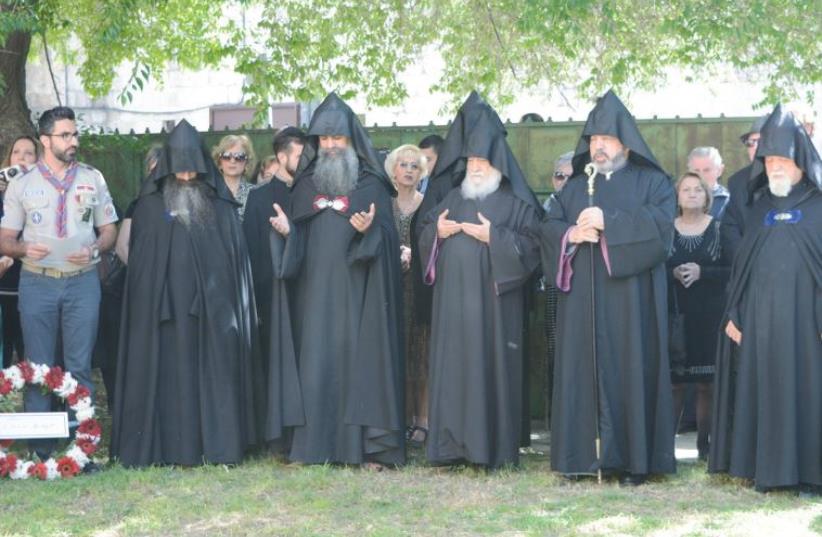 ARMENIAN PATRIARCH of Jerusalem Nourhan Manougian (holding staff) and event co-organizer Harut Baghamian (in Scouts uniform) join other community leaders at yesterday’s ceremony at the capital’s St. James Monastery
(photo credit: UDI SHAHAM)
Advertisement
Some 300 people gathered on Saturday in St. James Monastery in the Armenian Quarter of Jerusalem and held a ceremony commemorating 101 years to the beginning of the Armenian Genocide.The ceremony was held after a mass that was led by Armenian Patriarch of Jerusalem Nourhan Manougian, and was attended by the leaders of Armenian community in Jerusalem. The service honored the memory of some 1.5 million Armenian victims whom Ottoman forces killed between 1915 and 1923, mainly in Syria.Commemorative events will be held throughout the world this year under the shadow of the ongoing violence between Armenia and Azerbaijan over the Nagorno-Karabakh region. Dozens have been killed so far in clashes that started earlier this month.Harut Baghamian, one of the organizers of the ceremony, a member of the Homenetmen youth movement and a descendant of Armenian Genocide refugees, told The Jerusalem Post that the Armenian community is disappointed from the way Israel deals with the memory of the genocide. “It’s not that they are denying like some countries, they are just not talking about it,” he said.However, Baghamian sees in the Jewish people a partner of the Armenians. “There were some Israeli politicians that have expressed their feelings about the genocide in the past, and we appreciate that.But we expect from the government to honor their values before politics,” he said.“We understand that this is a political issue. We receive a broad support from the Israeli public. There is much resemblance between the Armenians and the Jews all throughout the history, hence we expect from the Jewish state to be the first to acknowledge and to speak out about the issue. The Armenians know about the horrors of the Jewish Holocaust so we hope that the Israeli government will act the same.”On Sunday, members of the Armenian community and social activists will protest in front of the Turkish Consulate in Jerusalem and the Turkish Embassy in Tel Aviv.