Does ISIS Turkey attack on Jews mark a new trend?

Recent ISIS publication calls for attacking “Jews and their allies wherever they find them.” 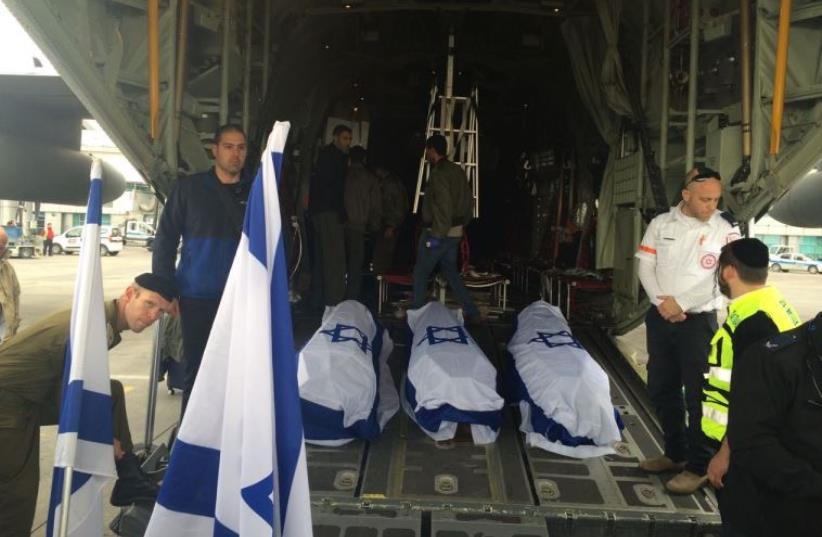 The coffins of three Israelis killed in the Istanbul suicide bombing are loaded onto an IAF transport plane
(photo credit: FOREIGN MINISTRY)
Advertisement
The alleged Islamic State suicide bomb attack on Saturday that killed three Israelis coincides with one of the group’s publications calling for killing Jews anywhere.Does this represent a new offensive against Jewish and Israeli targets by the Sunni extremists group?On the other hand, some experts on radical Islamic groups played down the report in the Turkish media on Monday that appeared to show video of the suicide bomber following a group of Israeli tourists from their hotel.“The Islamic State does not see war against Israel or the Jews or the targeting of Israelis as a high priority. Therefore its rivals in the Islamic world often criticize it for not acting against Israel,” Rafael Green, director of the Jihad and Terrorism Threat Monitor of MEMRI (the Middle East Media Research Institute), told The Jerusalem Post.Several months ago, Islamic State leader Abu Bakr al-Baghdadi Al-Baghdadi answered this criticism and promised that his organization had not forgotten about Palestine, said Green.And to further blunt this criticism, the most recent issue of the Islamic State's official newsletter, Al-Naba, published an article laying out its stance on the Palestinian issue and the war with Israel, noted Green. “In the article it stressed that the war against Israel does not have priority. However, the Islamic State did stress that Palestinians have a duty to wage jihad against Israel, and that Muslims from around the world have a duty to assist them, including by attacking targets associated with Israel, Jews and their allies around the world.”“This is the first time this instruction is spelled out explicitly in one of the organization's publications. Adhering to Islamic State doctrine, the article stresses that the war is a religious one, not merely a war to regain territory or achieve revenge and so on, as is the case with other Islamic groups,” explained Green.MEMRI shared an early transcript of the article with the Post, demonstrating that the group was calling for attacks on Jews everywhere."The war against these Jews is the duty of every Muslim, but this duty applies especially to the people of Beit Al-Maqdis [Palestine], for they are [geographically] closest to them,” it said.“It is the duty of Muslims worldwide to assist [the Palestinian Muslims in their fight] by sending them whatever men and money they can send. In addition, [they must] help [the Palestinians] and target their enemies by attacking the Jews and their allies wherever they find them, [by] killing them, destroying their property and harming their interests in any way they can."Ely Karmon, senior researcher at the Institute for Counter-Terrorism and at the Interdisciplinary Center Herzliya’s Institute for Policy and Strategy, told the Post that the lack of a claim of responsibility for the attack from Islamic State raises questions.Islamic State “has no problem claiming such responsibility,” he said, emphasizing that the group still very well could be behind the attack.Karmon cautiously raises the possibility that Hezbollah could be responsible because of the way the attack was reportedly carried out. “If it is true that the suicide bomber followed the Israelis from outside their hotel and created an explosion in an area that caused minimum local casualties, then it follows past Hezbollah operations,” he said.Past Hezbollah attacks against Jewish/Israeli targets such as the one in Burgas, Bulgaria and other failed attempted attacks in Cyprus and Bangkok followed this model, added Karmon.“We have to wait and see who was behind it,” he continued, raising another possibility that the attacker could have heard Hebrew by chance and decided spontaneously to attack the Israelis.Green, however, doubts Karmon’s theory, pointing out that for some reason Islamic State does not claim responsibility for attacks in Turkey. “They refrained from claiming responsibility in previous attacks in Turkey which were carried out against other targets,” he said.“I don’t see a reason not to take the word of the Turkish authorities on the bomber’s ISIS connections in this case,” he added.Yoram Schweitzer, a terrorism expert at the Institute for National Security Studies in Tel Aviv, told the Post that until evidence proves otherwise, he assumes the attack did not target Israelis specifically, but tourists in general.“It is likely the attacker was looking for tourists,” he said, adding that if it is proven that Israelis or Jews were indeed the target it would not be surprising.“That Islamic State is launching an international campaign seeking out, among others, Israeli and Jewish targets which for me is already a fact of life that should be expected.”