Hamas spokesman Sami Abu Zuhri said that Hamas views the court's decision as an important decision that will help Egypt maintain a balanced position towards the Palestinian parties. 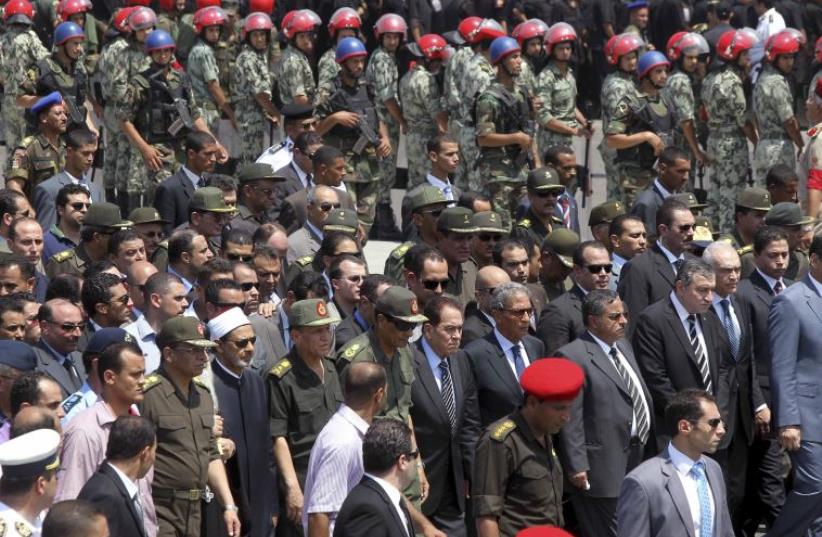 The funeral of Egyptian soliders killed during the Sinai attack on August 5, 2012
(photo credit: REUTERS)
Advertisement
Egypt's Administrative Court dismissed on Tuesday a petition to prohibit Hamas members from entering and exiting the country until the conclusion of the investigation into a terror attack that targeted Egyptian soldiers in Sinai, as well as Israelis across the border, in August 2012.The petition, submitted to the court during the rule of ousted president Mohammad Morsi, stated that: "It turns out that Hamas and Palestinian jihadi organizations stood behind the massacre of 16 Egyptian soldiers, in order to provide Morsi with the opportunity to get rid of Mohammad Hussien Tantawi (former commander-in-chief of the Egyptian armed forces) and Murad Muafi (former director of the General Intelligence Directorate)."Hamas spokesman Sami Abu Zuhri said that Hamas views the court's decision as an important decision that will help Egypt maintain a balanced position towards the Palestinian parties. Abu Zuhri also expressed hope that the decision will contribute to efforts to rapidly open the Rafah border crossing between Egypt and Gaza to the movement of goods and people.  The Sinai attack in question took place on August 5, 2012, when armed men ambushed an Egyptian military base in the Sinai Peninsula, killing 16 soldiers and stealing two armored cars, which they used to infiltrate into Israel from the Kerem Shalom border crossing.The attack is considered a turning point in Egypt's dealing with Islamic terror strongholds in Sinai, while it was also an alarm bell for Israel, demonstrating the grave threat posed to its security by the terror organizations in the Peninsula.