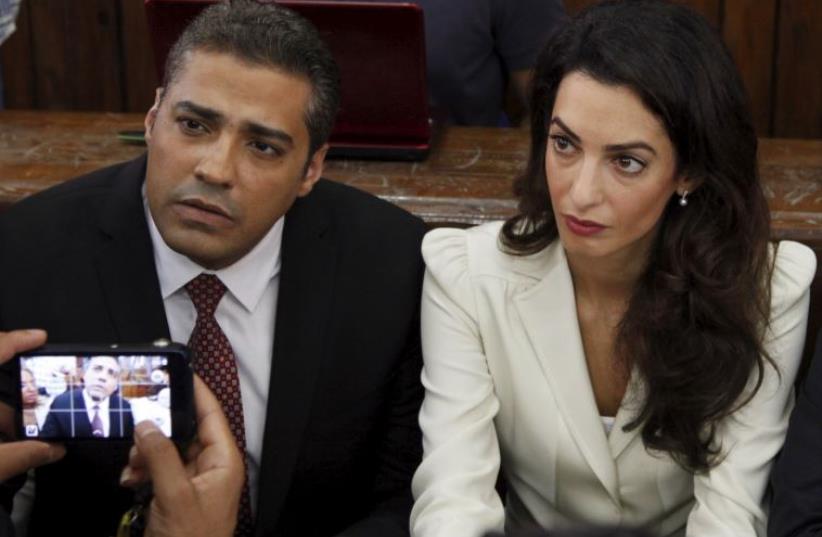 Al Jazeera television journalist Mohamed Fahmy (L) and his lawyer Amal Clooney look on before hearing the verdict at a court in Cairo
(photo credit: REUTERS)
Advertisement
An Egyptian court sentenced three Al Jazeera TV journalists to three years in prison on Saturday for operating without a press license and broadcasting material harmful to Egypt, a case that has stirred an international outcry.The verdict, in a retrial, was issued against Mohamed Fahmy, a naturalized Canadian who has given up his Egyptian citizenship, Baher Mohamed, an Egyptian, and Peter Greste, an Australian who was deported in February.Rights advocates say their arrest was part of a crackdown on free speech waged since the army overthrew President Mohamed Morsi, a senior Muslim Brotherhood figure, in July 2013 following mass unrest over his rule.Judge Hassan Farid said the defendants, dubbed the "Marriott Cell" by the local press because they worked out of a hotel belonging to that chain, "are not journalists and not members of the press syndicate" and broadcast with unlicensed equipment.Baher received an additional six months in prison. The state news agency MENA said that extra time was handed down because he was in possession of a bullet at the time of his arrest.The three men were originally sentenced to seven to 10 years in prison on charges that included spreading lies to help a terrorist organization, a reference to the Muslim Brotherhood, which the military toppled from power two years ago.The three defendants denied all charges, calling them absurd. Three other Egyptians, all students, also received three-year sentences for the same charges.Speaking on Al Jazeera in reaction to Saturday's verdict, Greste said he was shocked at the scale of the sentence. "Words really don't do justice," he said. "To be given three-year sentences is outrageous. It is just devastating for me."Fahmy and Mohamed, who were released on bail in February after over a year in jail, were taken back into custody after the verdict, according to Fahmy's wife, Marwa Omara. She was in tears after the sentences were read out."We will appeal this verdict and hope it will be reversed. We are now going to be holding a series of meetings with government officials where we will be asking for Mr. Fahmy's immediate deportation to Canada," said Fahmy's lawyer, Amal Clooney."His colleague Peter Greste was sent back to Australia; there is no reason why the same thing shouldn't happen in Mr. Fahmy's case."Western governments have voiced concern for freedom of expression in Egypt since Morsi was ousted but have not taken concrete steps to promote democracy in Egypt, an important strategic ally in the Middle East."Mohamed has been sentenced and all I can ask for now is for all his colleagues to stand by him and to keep calling for his release, but this is extremely unfair," said Fahmy's wife."I ask the Canadian government to extract him from here as he is a Canadian citizen and to deport him back to Canada. All what I am asking (for) is justice and fairness, for what happened with Peter to be applied to Mohamed."Canada called for Fahmy's "full and immediate release," after the verdict. "Senior Canadian officials in Canada and in Cairo are pressing Egyptian authorities on Mr. Fahmy's case. This includes advocating for the same treatment of Mr. Fahmy as other foreign nationals have received," Canadian Minister of State Lynne Yelich said in a statement.The US State Department said in a statement it was "deeply disappointed" by the verdict, which "undermines the very freedom of expression necessary for stability and development."Al Jazeera condemned the court's decision in a statement read by the channel's general director, Mostefa Souag."This judgment is a new attack on the freedom of the press, and it's a black day in the history of the Egyptian judiciary.""There is no evidence our colleagues in any way fabricated news. This was comprehensively debunked by the court's own technical committee," Al Jazeera English Acting Managing Director Giles Trendle told a news conference in Doha.Human rights groups have accused Egyptian authorities of rolling back freedoms won in the 2011 popular uprising that toppled autocrat Hosni Mubarak.In June, the New York-based Committee to Protect Journalists said Egypt was holding at least 18 journalists behind bars, the highest number since record-keeping began in 1990. They were being held on the pretext of national security to crack down on media freedoms, it said.Egypt says it has launched a security crackdown to eradicate Islamist militant "terrorists" and deliver stability.Speaking after the verdict, the British ambassador to Egypt, John Casson, said the country's stability should not be built on a "shaky foundation which deprives people of their rights and undermines the freedom of the press and freedom of expression."Amnesty International called Saturday's verdict "farcical.""The fact that two of these journalists are now facing time in jail following two grossly unfair trials makes a mockery of justice in Egypt," said Philip Luther, Amnesty's director for the Middle East and North Africa.