Hezbollah delegation visits Cairo as both parties seek to prevent the conflict in Lebanon between Hezbollah and the pro-Saudi establishment from deteriorating into a proxy-war. 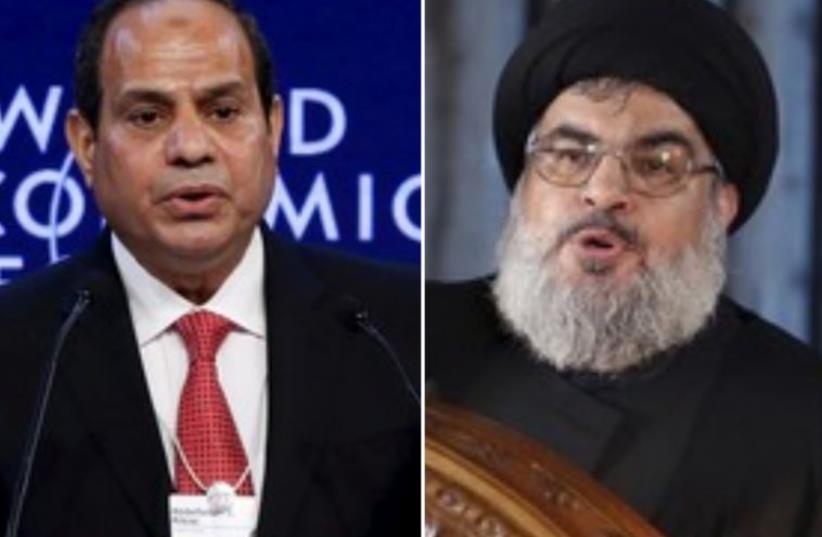 Egyptian President Abdel Fattah al-Sisi (R) and Hezbollah leader Hassan Nasrallah
(photo credit: REUTERS)
Advertisement
A high-level delegation representing Hezbollah Secretary General Hassan Nasrallah arrived in Cairo on Monday to discuss the security coordination with Egypt in light of the inner conflict in Lebanon and the Syrian civil war, the Kuwaiti newspaper al-Jarida reported on Monday.According to al-Jarida, the delegation includes the head of Hezbollah's Arab relations department, Hassan Izz-al-Din, the party's media advisor Mohammad Afif, and member of Lebanese parliament, Ali Miqdad. According to Hezbollah, the visit was aimed at offering condolences on the death of the well-known Egyptian political commentator, Mohamed Hassanein Heikal, who passed away at 92 on February 17. Heikal was accused of being pro-Hezbollah after refusing to call it a terror organization and he had a very close relationship with Nasrallah.However, it appears that the real reason for the visit is the shared interest of both Hezbollah and Egypt in assuring that the inner conflict in Lebanon between Hezbollah and the pro-Saudi establishment does not deteriorate into a Syrian-like conflict with world powers' involvement. The escalating Syrian civil war has created a considerable rapprochement between the Lebanese terror organization and Egypt, as both parties oppose the role played by Saudi Arabia and Turkey in the conflict. Turkey's support for the Muslim Brotherhood and Saudi Arabia's attempts to take the lead in the Arab world through its involvement in Syria and Yemen are pitting Egypt against the two Sunni allies. Egypt, which paints itself as the leader of the Arab world, is trying to use this rapprochement to prevent the eruption of another proxy war between Saudi Arabia and Iran, this time in Lebanon.According to al-Jarida, Hezbollah officials were expected to deliver placating messages to Egypt about the situation in the Gaza Strip, claiming that Hezbollah's influence in Gaza should not worry Cairo.