Cairo targeted the terror organization after Islamist militants killed 12 members of Egypt's military in North Sinai province and wounded six more in an attack on a checkpoint on Friday. 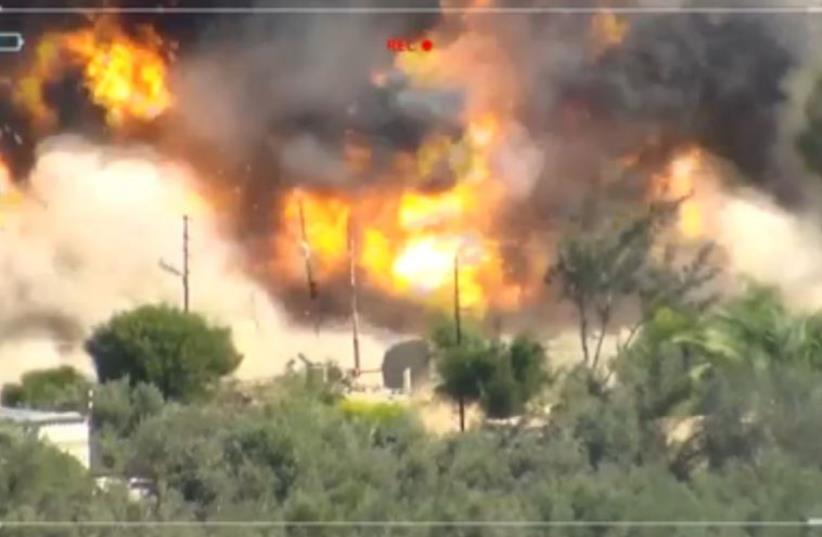 ISIS branch in Sinai reveals group's new weaponry‏
(photo credit: screenshot)
Advertisement
The Egyptian Air-force assaulted a number of Islamic State positions based in the Sinai Peninsula on Saturday in response to a deadly terror attack carried out by the terrorist organization the previous day, according to Channel 10.The Egyptian military reportedly killed over 100 ISIS fighters in the excursion while destroying outposts and armories belonging to the militants in a three hour attack, Channel 10 citing an Egyptian military spokesperson reported. Cairo targeted the terror organization after Islamist militants killed 12 members of Egypt's military in North Sinai province and wounded six more in an attack on a checkpoint on Friday, the military said, adding that it killed 15 militants in return. Islamic State claimed responsibility for the incident, which took place 40 km (25 miles) from the town of Bir al-Abd, making it the first major attack in the central Sinai area, which had so far escaped the militant Islamist's' campaign.It was carried out using assault rifles and some heavier weapons, medical and security sources said. The wounded were taken to hospital in al-Arish."An armed group of terrorist elements attacked a security checkpoint in North Sinai this morning using four-wheel drives and were immediately engaged. Our forces killed 15 terrorists," the military said in a statement. "The clashes led to the martyrdom of 12 and injury of six armed forces heroes." Islamic State said it killed more than 20 soldiers and that it suffered no casualties. It said its members looted weapons and ammunition from the checkpoint."A number of the caliphate's soldiers have launched an attack on a checkpoint belonging to the apostate Egyptian army south of Bir al-Abd that killed over 20 apostates and injured more," the group said in a statement.An Islamist insurgency in the rugged and thinly populated Sinai Peninsula gained pace after the Egyptian military overthrew President Mohamed Mursi of the Muslim Brotherhood, Egypt's oldest Islamist movement, in mid-2013 following mass protests against his rule.The militant group staging the insurgency pledged allegiance to Islamic State in 2014 and adopted the name Sinai Province. It is blamed for the killing of hundreds of soldiers and policemen, and has started to target Western targets within Egypt.