The deal, called the "Cairo Declaration" will see the two countries establish a joint Arab military force and define their maritime borders in the Red Sea. 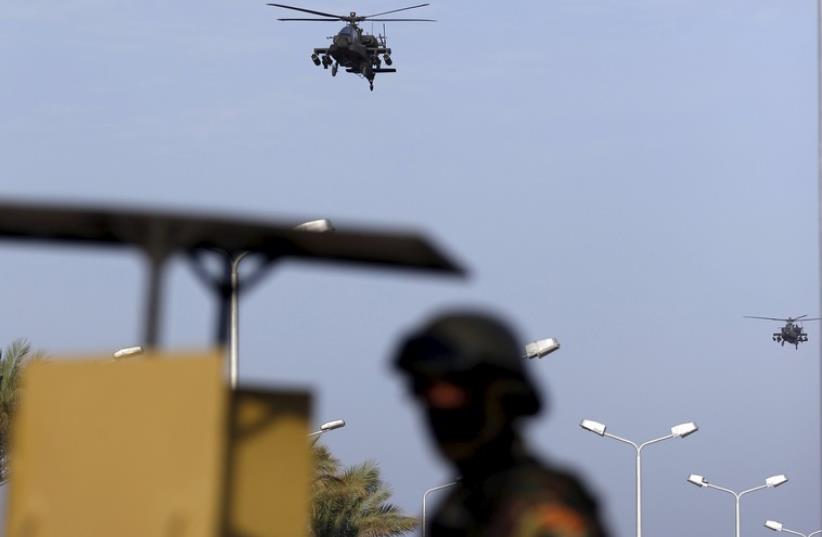 Egyptian military helicopters fly over a republican guard around the congress hall during the Arab Summit in Sharm el-Sheikh, in the South Sinai governorate, south of Cairo, March 28
(photo credit: REUTERS)
Advertisement
Egyptian armed forces killed a leading member of the country's Islamic State affiliate in a shootout outside his North Sinai home, the army spokesman said in a statement on Saturday.Selim Suleiman al-Haram, identified in the statement as a leader of the militant group known as Sinai Province, was asked to turn himself in by a group of soldiers that surrounded his house in the town of Sheikh Zuweid, the army said.He refused, opening fire on the troops and attempting to blow himself up before being shot dead, the army said.Sinai Province, which has pledged allegiance to Islamic State, claimed responsibility last week for a bombing that the army said killed four soldiers near Rafah, a town on the border with the Gaza Strip.The recent confrontation with al-Haram comes in light of Egypt's efforts to increase cooperation with Saudi Arabia in a bid to fight what it sees as subversive elements in the region.According to the Arabic daily newspaper, Asharq al-Aswat, the deal, called the "Cairo Declaration", was signed by Saudi Arabia's Deputy Crown Prince Mohammad bin Salman and Egyptian President Abdel-Fattah el-Sisi.Among its provisions, it will see the two countries establish a joint Arab military force and define their maritime borders in the Red Sea. Bilateral cooperation will also extend to economic sectors, including electricity, energy and transportation infrastructure.The deal also made a point of promising more cultural and and media-related cooperation due to what an official statement identified as a regional cultural and political turmoil. “At this current period which the Arab world is facing, we need to work together, because the threats are many, and we will not overcome them unless we work together," said Sisi."Egypt and Saudi Arabia are the two pillars of Arab national security, and together we can confront these challenges."Both Saudi Arabia and Egypt identify Islamist groups like the Islamic State and the Muslim Brotherhood as security threats. The fear of a growing destabilization due to militant Islam has underpinned Egypt's branding of the Muslim Brotherhood as terrorists in December of 2013 and its official outlawing of the group in December.Saudi Arabia has deep-rooted enmity for the group, seeing its brand of Islamism as a threat to its own state-endorsed Wahabi ideology. Meanwhile, both countries' have had to deal with a growing threat from the Islamic State group. While Cairo has been mired in a bloody insurgency against ISIS in the Sinai, Riyadh has been struck by a string of car-bombings, including two attacks on successive Fridays that killed dozens of Shi'ite worshipers in May. At a press conference following the official meeting, which included a visit to a graduation ceremony at Egypt's Military Academy, Riyadh's Foreign Minister, Adel al-Jubair expressed both countries' desire to “to boost and intensify bilateral, strategic, and historic ties."