Europe scrambling for a solution as migrant crisis hits a peak

The refugee crisis is now the worst in Europe since World War II. 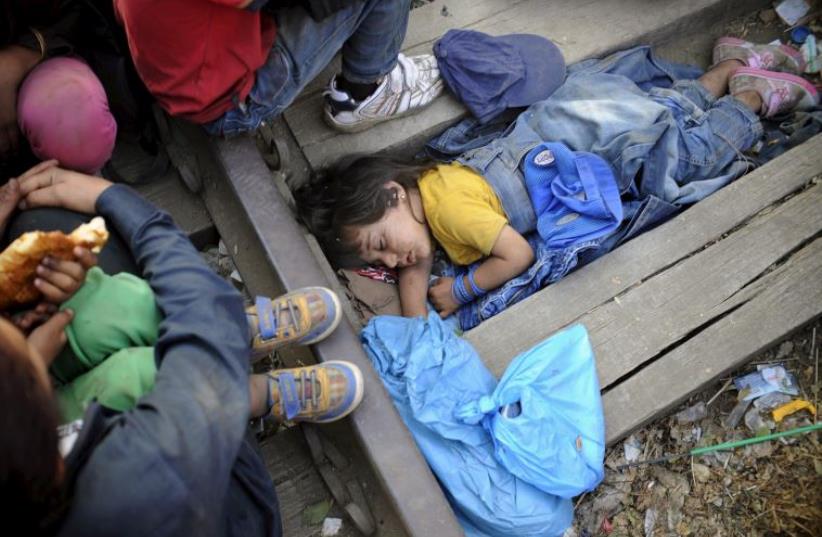 Four-year-old Rashida from Kobani, Syria, part of a new group of more than a thousand immigrants, sleeps as they wait at border line of Macedonia and Greece to enter into Macedonia
(photo credit: REUTERS)
Advertisement
TRIPOLI/EISENSTADT, Austria - Libya on Friday recovered the bodies of 82 migrants washed ashore after their overcrowded boat sank on its way to Europe while Austria said 71 refugees including a baby girl had been found dead in the back of an abandoned freezer truck.Three people were arrested in Hungary in connection with the truck deaths and Austrian police said they suspected a Bulgarian-Hungarian trafficking ring was responsible.The victims - 59 men, 8 women and four children, including a girl estimated at 1-2 years old - were probably from Syria, police said.At least 180 were either dead or missing in the Libyan disaster. Both tragedies were a result of a renewed surge in migrants seeking refuge from war and poverty that has confronted Europe with its worst refugee crisis since World War II.The UN refugee agency said the number of refugees and migrants crossing the Mediterranean to reach Europe had passed 300,000 this year, up from 219,000 in the whole of 2014.More than 2,500 have died making the crossing this year, the UNHCR said, compared with 3,500 who died or went missing in the Mediterranean in 2014.A security official in the western Libyan town of Zuwara, from where the doomed migrant boat had set off, said there had been around 400 people on board. Many appeared to have been trapped in the hold when it capsized on Thursday."About 100 people are still missing," said Ibrahim al-Attoushi, a Red Crescent official, and about 198 had been rescued.The migrants were from sub-Saharan Africa, Pakistan, Syria, Morocco and Bangladesh, the security official said.The Italian coast guard said 1,430 people had been rescued in various operations off Libya on Thursday, and a merchant ship sent to the aid of a small boat carrying 125 people recovered two bodies.The Libyan coast guard has limited capabilities, relying on small inflatables, tug boats and fishing vessels.Zuwara, near the Tunisian border, is a major launchpad for smugglers shipping migrants to Italy.Libya is a major transit route for migrants hoping to make it to Europe. Smuggling networks exploit the country's lawlessness and chaos to bring Syrians into Libya via Egypt while Africans arrive through Niger, Sudan and Chad.SWEEPING NORTHIn Europe, refugees and migrants have swept north through the Balkans in recent days, with thousands of Syrians, Afghans and Pakistanis crossing from Serbia into EU-member Hungary, where authorities said more than 140,000 had been caught entering the country so far this year.Almost all hope to reach the more affluent countries of northern and western Europe such as Germany and Sweden.Hungary, which is part of Europe's Schengen passport-free travel zone, is building a high fence along its border with Serbia to confront what it says is a threat to European security, prosperity and identity.Austrian police had originally put the death toll in the truck found abandoned near the Hungarian border on Thursday at about 50, but later raised the figure to 71.The refrigerated vehicle was found by an Austrian motorway patrol with fluids from the decomposing bodies seeping from its back door. It had been abandoned on the side of the highway that leads from Hungary to Vienna.The truck is at a customs building in the village of Nickelsdorf, which has refrigeration facilities and where forensic specialists in white protective suits and yellow rubber boots could be seen wheeling body bags away.In Hungary, police said 10 Syrian migrants were injured on Friday when a van driven by a Romanian suspected of human trafficking overturned en route for Budapest.At a Geneva briefing, the UNHCR said that in one incident on Thursday, 51 people suffocated in the hold of a boat and survivors said they had been beaten to force them into the hold and then had to pay money to smugglers just to come out to breathe.One of the survivors, an Iraqi orthopedic surgeon, said he had paid 3,000 euros ($3,400) to come up on to the top deck with his wife and two-year-old son.Last week, 49 people died in another boat's hold after inhaling poisonous fumes, and on Wednesday 21 people are thought to have died after a dinghy with 145 on board got into difficulty, UNHCR spokeswoman Melissa Fleming said.