Expert: Israeli Arabs tend to be less radical than Palestinians

BESA director Efraim Inbar: The best situation is to be the majority group in a country, and have the guns. 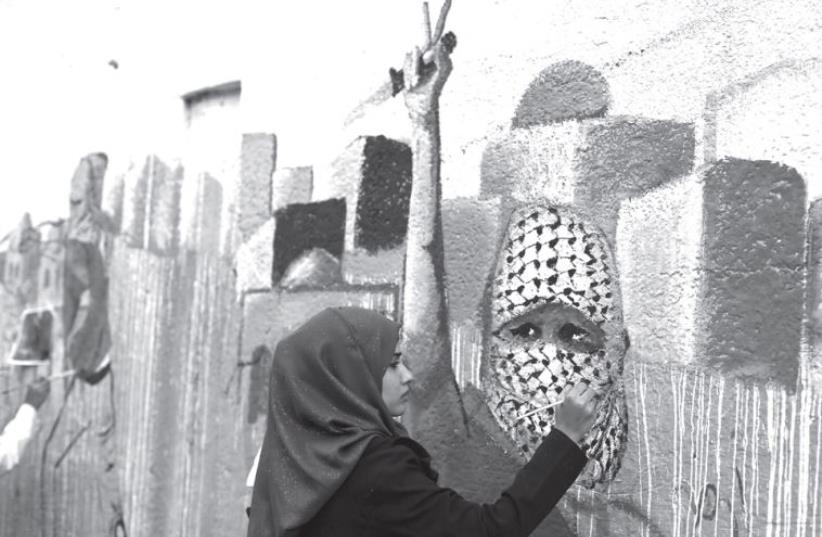 A Palestinian woman paints on a wall
(photo credit: REUTERS)
Advertisement
Experts discussed minorities in the region at a conference Wednesday at Bar-Ilan University’s Begin-Sadat Center for Strategic Studies (BESA), focusing on internal conflicts within Israel, Saudi Arabia, and Iran.
“Israeli Arabs poll entirely differently from Palestinians in the territories as the majority of Arab citizens condemn terror on both sides, but consistently oppose Israel in foreign affairs,” Prof. Hillel Frisch of BESA said at the conference, titled “Minorities in the Middle East.”
Frisch, an expert on Israeli Arabs, said the mostly Arab parliamentary group, the Joint List, often uses confrontational rhetoric, but not as much in its behavior.
Frisch told The Jerusalem Post that participation in terrorist acts by Arab citizens of Israel is very low compared to the involvement in such acts among Palestinians in the territories. Thus 180 Israeli Arabs, or only two percent of the terrorist prisoners in Israeli jails, were Arab citizens in 2004.
Frisch explains this difference by arguing that Israeli citizenship offers better economic integration and that Israeli Arabs have learned that “working outside of the system as it did during the 2000 al-Aksa intifada doesn’t pay.”
"Nevertheless, such involvement in terrorism is high in comparison to Western democracies."
"In all of Europe, with a Muslim population at least five times greater than the Israeli Arab population, there were 289 terrorists in jail compared to 180 Israeli Arabs," he said.Prof. Ofra Bengio, editor of the book Kurdish Awakening: Nation-Building in a Fragmented Homeland, told the Post that the Kurds can no longer be considered a minority because they are no longer disenfranchised.“They don’t refer to themselves as minority,” she said, noting they numbered some 35 million, with heavy concentrations in Iraq, Syria, Iran, and Turkey, said Bengio, a senior research fellow at the Moshe Dayan Center for Middle Eastern and African Studies at Tel Aviv University.“The Arab uprisings, the 2003 Iraq war, the Sunni-Shi’ite rivalry, and the rise of Islamic State have catapulted the Kurds to be an important player,” she said.Unlike the “Arab Spring” which had terrible results, said Bengio, it appears the Kurds are going to experience the real “Spring.”“I don’t think the map of the Middle East will continue to be the same in the 21st century – Sykes-Picot is gone forever and the great winners will be the Kurds.”No one will be able to roll things back to the 20th century, she said.Asked to sum up the lessons from the conference and being a minority in the region, Prof. Efraim Inbar, director of BESA, told the Post bluntly, “The best situation is to be the majority group in a country, and have the guns.”Prof. Joshua Teitelbaum, an expert on Saudi Arabia and the modern Middle East, spoke about the Shi’ite minority in Saudi Arabia and the country’s recent execution of Shi’ite cleric Nimr al-Nimr.“Saudi Arabia’s raison d'etat is to be the paragon of Sunni Islam,” said Teitelbaum, a senior research associate at BESA.He said that the exact number of Shi’ites in Saudi Arabia is not known, but estimates put it at around 10 to 15% of the population. This minority rejects the Saudi narrative which is based on the mythical belief of unifying ArabiaReferring to the decision to kill Nimr, he said that the Saudis feel the need to exhibit a muscular foreign policy. Teitelbaum told the Post earlier this week that he sees Saudi action as a response to American retrenchment in the region.Saudi Arabia is a religious state that follows the strict form of the Wahhabi school of Islam which sees Shi’ites as an enemy, he said at the conference. And in order for the state to retain its religious legitimacy, it must kowtow to internal Wahhabi clerics and their supporters.In addition, he noted, there is the external factor which deals with the country projecting itself as the leader of Sunni Muslims and as a bulwark against Shi’ite Iran and its regional allies.For Wahhabis, Shi’ite are seen as polytheists with their belief in the special role of Imams, which they believe are the spiritual successors of the prophet Muhammad.  Eldad Pardo, an Iran expert from the Hebrew University, said that Kurds in Iran are not a big problem for the regime partly because they only make up around 7 to 8% of the population.Sunni and Shi’ite Arabs in the country also do not threaten the regime and are not as violent as the Baluchi minority in the East, which borders Pakistan and are involved in the drug trade and terrorism, explained Pardo.The minorities of Iran are concentrated in the periphery and along the country’s borders, often forming cohesive units with their compatriots in bordering states, making for a sensitive situation, he continued.After the 1979 Iranian Revolution minorities expected better treatment as the country moved away from nationalism and towards a more religious identity. However, these hopes were soon dashed.Regarding supreme leader Ayatollah Ali Khamenei, Pardo said that “whoever thinks he is a rational actor should think again,” noting the fact that he supposedly consults angels and uses other mystical methods.“Government texts show a lot of fear on the ethnic issue,” Pardo said.