“All evidence suggests preparations are underway for a new chemical scenario in Idlib,” claimed Hezbollah leader Hassan Nasrallah on Sunday. 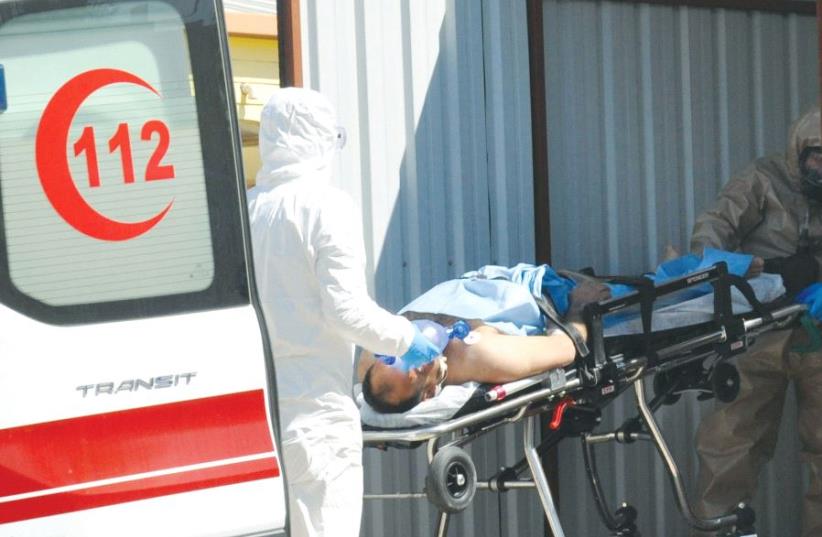 A Syrian man from Idlib is carried by Turkish medics wearing chemical protective suits to a hospital in the border town of Reyhanli in Hatay province, Turkey
(photo credit: REUTERS)
Advertisement
In a coordinated media campaign before the Idlib offensive begins, the Syrian regime, Hezbollah’s Hassan Nasrallah and pro-Russian commentators have all begun to warn of a chemical weapons attack. “All evidence suggests preparations are underway for a new chemical scenario in Idlib,” claimed Hezbollah leader Hassan Nasrallah on Sunday.“Foreign specialists” have arrived in Syria and “may stage a chemical attack,” RT (media network), which is supported by Moscow, warned Sunday night. The report noted that the Russian Defense Ministry had said that these “specialists” might stage the attack in the next two days and “this will be filmed for international media to frame Damascus forces.”The Russian Embassy in London even tweeted specifics about the alleged upcoming attack. “Terrorists prepare fake chemical attack in Syria. Eight chlorine containers delivered to Hallouz near Jisr al-Shughur in Idlib province. ‘Victims’ to be saved by White Helmets, trained by UK-based Olive Group.” The embassy warned on Saturday that this would be the “pretext for new air-strikes by the US and the UK.” Predictably the claims have made their way around the media circuit of blogs and media connected to the Syrian regime or which are sympathetic to it. Al-Masdar News, a Beirut-based online newspaper, reported that “jihadists are preparing a chemical weapons provocation.”Twitter accounts supportive of Damascus have been ferociously tweeting this “false flag”. One account even claims that the US shut down conspiracy theorist Alex Jones because he “exposes false flags,” and alleges that John Bolton is behind a conspiracy “encouraging Al-Qaeda in Idlib to create a chemical attack.” Another RT commentator writes that “beyond the tattered veil of moral superiority that is US war propaganda, Bolton’s words were clearly a very public command to Al-Qaeda and co-extremists to stage yet another fake chemical attack.” Even China’s Xinhua News has an analysis about how “US aims to prolong Syria’s war by stirring chemical weapons threats again.”
Bolton on Iran and Syria, August 22, 2018 (Reuters)
A Related Video You May Like:
The US has warned that Washington will strike the Syrian regime if it uses chemical weapons again, as they did in April 2017 and 2018. Elliot Higgins, founder of Bellingcat, a site that publishes investigations online — many connected to the Syrian conflict — compiled a long list of previous “false flag” claims made by pro-regime media before various offensives and pointed out that there have been over 200 chemical weapons attacks since 2012.Sources in Idlib are also preparing for the worst, claiming the regime will drop chemical weapons on them in the upcoming offensive by Damascus to strike at rebel groups and Hayat Tahrir al-Sham, an extremist group that controls parts of Idlib. “Chemical gas alert as Idlib assault nears,” reads the headline at Arab News on August 27th. Journalist Danny Gold notes that “the Syrian regime will likely use chemical weapons. Idiots will again tout ‘false flag’ conspiracies. You really think Syrians would gas themselves (for the 200th-something time) in hopes of finally spurring intervention.”The avalanche of stories about a chemical weapons attack put out by pro-regime sources appears to try to inoculate it against claims that it has carried out an attack, if one does happen. At the same time it will give the commentators an “I told you so” ready-made claim after the attack in case of US-led air-strikes. This will feed the narrative that the regime in Damascus is threatened by “regime change” and “imperialism” and that the West is part of a conspiracy against it.At the same time Western officials seem to be preparing for an attack as well, and warning the regime and its allies against even thinking of using chemical weapons. The lead-up to the battle for Idlib has already begun. It has begun with a battle over the narrative, whether a chemical weapons attack that hasn’t happened could be a “false flag” or a legitimate reason for Washington and its allies to strike at Assad’s army.