By THE MEDIA LINE NEWS AGENCY 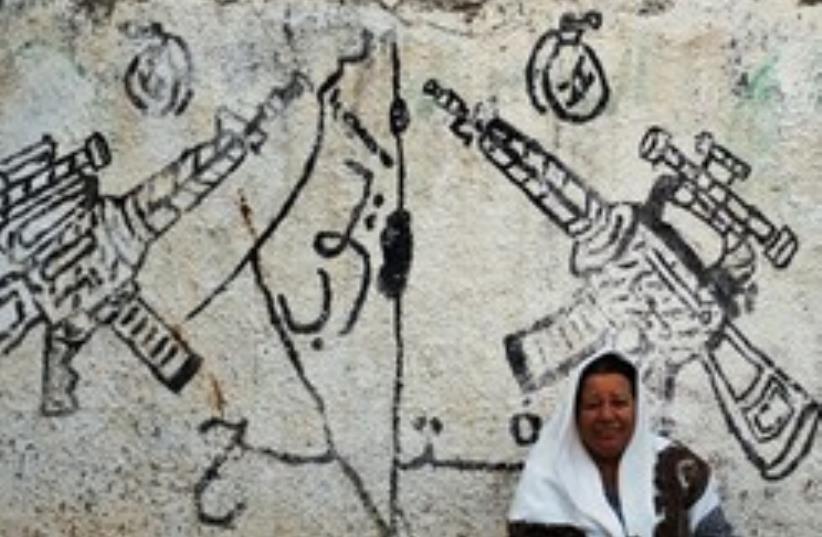 A Palestinian woman rests next to a wall decorated
(photo credit: AP)
Advertisement
As more than 2,000 delegates gathered in Bethlehem for the long-delayed Sixth Fatah Congress, the leader of Fatah in Bethlehem warned of a split in the party if the leadership denies a role to the younger generation who launched a wave of violence against Israel in the second intifada.
"There will be a clear split within Fatah," Abdullah Abu Hadid, secretary of Fatah in Bethlehem and a leader of the Al-Aqsa Martyrs Brigades, told The Media Line in an exclusive interview. "We have the leaders of the first and second intifadas and the real leaders of the Palestinian people, the leaders of the Palestinian street."
Palestinian Authority President Mahmoud Abbas has been struggling to stay in control of the movement after they lost an election in 2006 to Hamas and were expelled from Gaza in a bloody coup the following year.
"I think that what's known as the Old Guard in Fatah gave what it could and it has nothing more to give," Abu Hadid said. "The movement needs to have new blood in its leadership, a young leadership."
"The sixth Fatah conference is drowning in oppression with people who have nothing to do with Fatah or its history," he added. "They just want to choose an Oslo leadership with a Zionist-American plan."
The gathering is the first meeting of the Fatah congress for more than 20 years and a rare opportunity to refresh the ranks of its aging leaders. Four of its 21-member ruling central committee have died and the surviving members, including Abbas, are all aged over 65. The congress will elect a new central committee and a new 120-member revolutionary council.
Abu Hadid said he wanted to see Marwan Barghouti, the former Fatah West Bank secretary-general now serving five life terms for murder in an Israeli jail, elected to the central committee and even as leader.
He said the jailed leader was "Fatah's savior and salvation" but warned that his appointment to the central committee would not be enough to stem a rebellion within the ranks.
Abu Hadid warned of a "third intifada" directed this time against the Palestinian leaders as well as the Israelis. He said the sense of frustration among ordinary Palestinians - at the lack of progress in talks with Israel, the economic situation and the corruption of senior officials - was worse today than in the weeks preceding the outbreak of the last intifada in 2000.
"If there's a third intifada, it will be in order to change the course of negotiations, to change the conduct of the Palestinian Authority, and change the conduct of the current leadership," he said. "The people won't enter a direct confrontation with the Israelis without correcting things at home and without amending things domestically."
"It's worse now than it was in 2000," he continued. "The Palestinian street is impoverished, the prices are rising without stop, Palestinian dignity is diminishing, Israelis are being hostile in Judaizing Jerusalem, demolishing houses in Jerusalem, arresting Palestinians on a daily basis, and the leadership isn't capable of protecting people."
But Thiab Ayyoush, president of Palestine Ahliya University and a former deputy minister who has been nominated for a seat on the revolutionary council, said there could be a compromise between the different generations.
"This conference is seen by most of the Palestinians, if not all, as very important because after our experience of building the Palestinian state since 1994 it is the first time that we have a real opportunity to examine and see what was done through these years," said Prof Ayyoush.
"We can't say that the old people are expired," he said. "We can't say this because we're still in need, you know, for their wisdom and their experience. However, we would like also to see the young people participate in this movement and have their role, their active role."
"Marwan Barghouti is one of the main leaders of the intifada and the people who are qualified for leadership," Ayyoush added. "We respect him. He spent a lot of years in the Israeli prisons and I think he is qualified but there are many persons who are also qualified."
Prof Ayyoush said the differences between the Fatah factions were more about style than about substance.
"They will be united in the end," he said. "There is no debate on the goals and objectives. It is only about the techniques."
Advertisement
Subscribe for our daily newsletter