“We want to have a proactive, on-the-ground impact in terms of providing the means to help Palestinians understand the problems of climate change.” 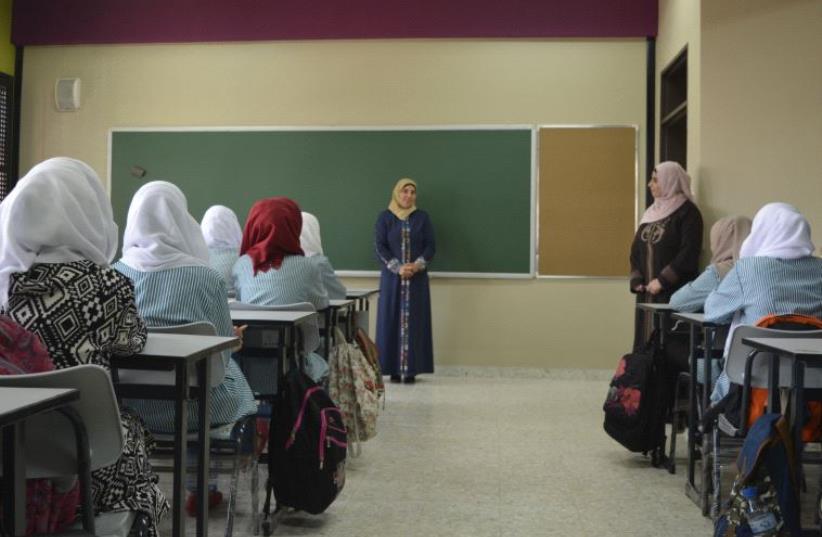 Students in classroom at Aqqaba Secondary Girls' School.
(photo credit: UDI SHAHAM)
Advertisement
It’s the first day of school in Aqqaba, a Palestinian village northeast of Nablus, at a local girls’ school. In their identical uniforms, students are running around the multicolored basketball court and along the ramp leading to the garden. One student stops in front of the trash bin, which includes compost, recycle, and waste containers, vacillating over into which trash can to toss her banana peel.In the teachers’ lounge, teachers are chatting about their new school and its many eco-friendly elements. One teacher is overheard remarking, “I still have to learn a lot about the green elements.”The $1.3 million Aqqaba Secondary Girls School, funded by USAID, is the first eco-friendly school in the West Bank and Gaza. USAID and the Palestinian Education Ministry initiated the idea, closely working together until its completion just a few months ago.Amana Abu Khaizaran, the newly appointed principal, told The Jerusalem Post during a tour of the eco-friendly school that while she is still learning about the school’s facilities, she believes green culture has roots in Palestinian traditions.“I come from a family of farmers,” she said. “When I was young we used to recycle our leftovers from meals, feeding them to the animals on our farm.”“At some point, we lost green culture, but we plan to revive it here and teach our students how to care for their surroundings and environment,” she said. 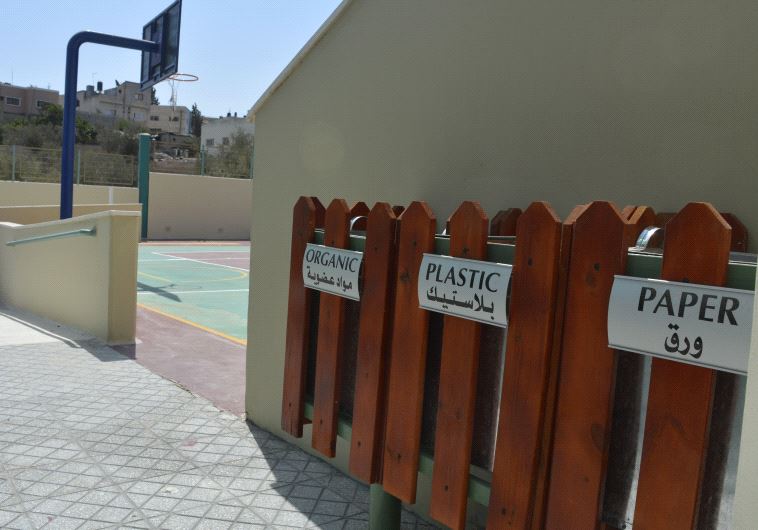 Recycle bins at the school. (Credit: UDI SHAHAM)The Aqqaba School incorporates a number of green elements including energy and water efficiency. Five 15 kilowatt solar panels sit on the roof of the school and provide electricity to a number of its spaces. Windows are designed to provide a balance of sunlight and shade in the classrooms and the flooring and walls are heavily insulated, stabilizing indoor temperatures.In terms of water efficiency, the school is equipped with a waste water management system, which recycles used water for alternative purposes. All the toilets have water-saving flush options and drip irrigation systems are installed in the gardens. In addition, the school features other green aspects such as trash separation, sound absorption panels in the hallways, and handicap accessibility.The principal hopes that the school’s 140 students will develop a green culture that extends beyond campus.“My hope is that they will not only learn to appreciate the environment at school, but also outside of school, especially so in their homes,” she said.“If we can separate our trash here, I think it is possible that we can separate our trash outside of the school as well.”She remarked that she plans to organize a number of seminars to further cement green culture and facilitate a deeper understanding of what exactly it constitutes: “I plan to host seminars and extracurricular activities to enable the students and teachers to learn even more about this issue.”Abu Khaizaran added that beyond the eco-friendly aspects, the school offers a number of other important opportunities for students that did not exist at their previous school.When she entered the arts hall, she smiled and said that Aqqaba is the only public school with such a space. “I am very excited that we have this hall,” she said, stating further, “We plan to use the stage as a theater to host plays based on the Palestinian issue and the lives of Arab poets such as Nizam al-Qabani.“I believe this space will enrich the learning experience, especially in terms of interactive learning,” she remarked.Abu Khaizaran, who used to teach chemistry, also took pride in the new science lab. “Most student labs in Palestine only have one table to conduct experiments, forcing teachers to demonstrate experiments,” she said, adding that, “Here, we have five different marble tables, meaning that entire classes can now conduct experiments in groups.”After visiting the newly planted garden behind the school, Abu Khaizaran admitted that, in her mind, the only disadvantage to the eco-friendly school is her new, but smaller office.USAID West Bank and Gaza Acting Mission Director Jonathan Kamin told the Post in a phone call on Wednesday that the US aid organization supported the school primarily to promote education and sustainability in the West Bank. “The school hits two important sweet spots for us, one is our commitment to education as a general priority. Education is a critical path for Palestinian youth and gives them opportunity to prepare them for life and open doors for them.“We also have a commitment to combating the problem of climate change.” He continued, “We believe wholeheartedly that climate change is a key issue not only to the Palestinians, but people around the world.“We want to have a proactive, on-the-ground impact in terms of providing the means to help Palestinians understand the problems of climate change.”Kamin stated further that the school has become a model for uniting the different aspects of green building in the West Bank and Gaza.“[While] we are trying to incorporate renewable energy and other green aspects in buildings in other places to a limited extent, this school has become a showcase for us to bring it all together whether that pertains to the material used to build the school or the renewable energy systems themselves,” he added.Maram Adnan, a 16-year-old student, said that she feels very fortunate to study at the Aqqaba School.“I and all of my classmates today agreed to maintain the new system,” she said. “We believe it is important to learn about and preserve the environment.”“Today we have entered something new. I can’t wait to see what the rest of the year has in store,” she said.