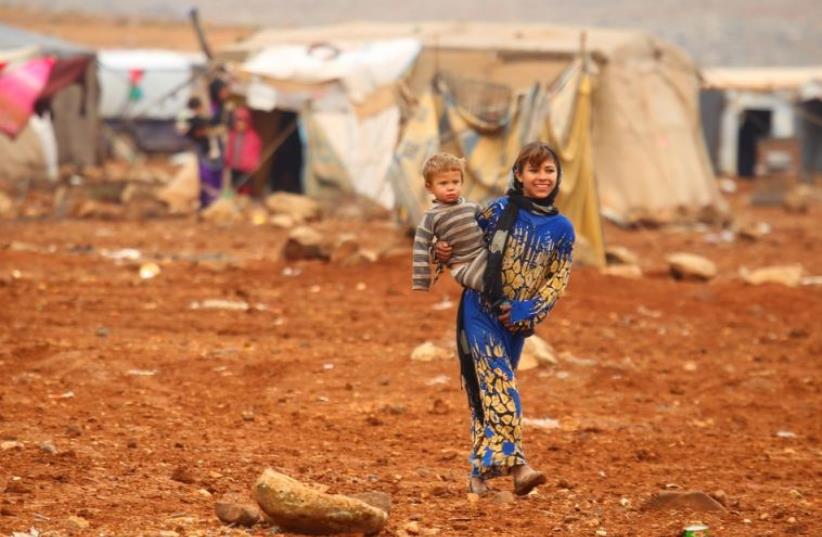 An internally displaced Syrian youth carries a baby inside a refugee camp in the Hama countryside
(photo credit: REUTERS)
Advertisement
For the first time since the Syrian civil war began, Israel’s government authorized the delivery of humanitarian aid into Syrian territory near its border, an American-Israeli businessman and philanthropist who leads the project told The Jerusalem Post Wednesday.“Israel finally agreed to allow in three types of aid: medical, educational and food,” said Moti Kahana, a businessman and founder of the NGO Amaliah, who sold his company in 2010 and since then has been using his own money to aid the Syrian rebels.The aid is being brought to the Israeli border with Syria, but no Amaliah employees are going into Syria, he explained.The aid is being transferred into what Kahana calls a “safe zone” adjacent to the border and comprised of the town of Quneitra and its surrounding area.Kahana has been pushing the government to allow such aid and the deliveries are being coordinated with Amaliah.One of the first goals is to provide urgently needed medical supplies in order to construct a field hospital, so that Syrians can be treated there without having to leave the country.Asked how the aid is going to be transferred into Syria and whether the IDF is going to insure security for the delivery, Kahana responded, “the IDF knows who to trust.”Questioned about the influence of Islamic State and al-Qaida’s Nusra Front in the Quneitra area, he responded that it is imperative to get educational supplies to the children there so that they can be in school and not be brainwashed and join radical Islamist groups.For the last five years, no schools have been functioning in this region.Sources in the Free Syrian Army coalition active in the area tell Kahana that the area is fairly calm and the locals are trying to uphold a safe zone.“This is a good opportunity to help and show them that their neighbors are wonderful people,” he said.Kahana called on the “world to join us. What we are doing by creating this safe zone is preventing the departure of more refugees.” He noted that the population in the Quneitra area is currently around 200,000 people compared to one million previously.Deputy Regional Cooperation Minister Ayoub Kara (Likud) told the Post, “I fully support sending humanitarian aid to the Quneitra area.”“Islamic State is today in retreat and the FSA is there as well as Nusra Front fighters. We don’t want radicals to arrive to our border,” he said, adding that Israel is closely observing events.Israel agrees to facilitate the transfer of humanitarian aid, but does not want to accept refugees, the Druse deputy minister explained.“Civilians are in a difficult situation and we want to help them and not wait for others,” he added.