Nearly 18% of Belgians who joined ISIS returned to Belgium at some point. 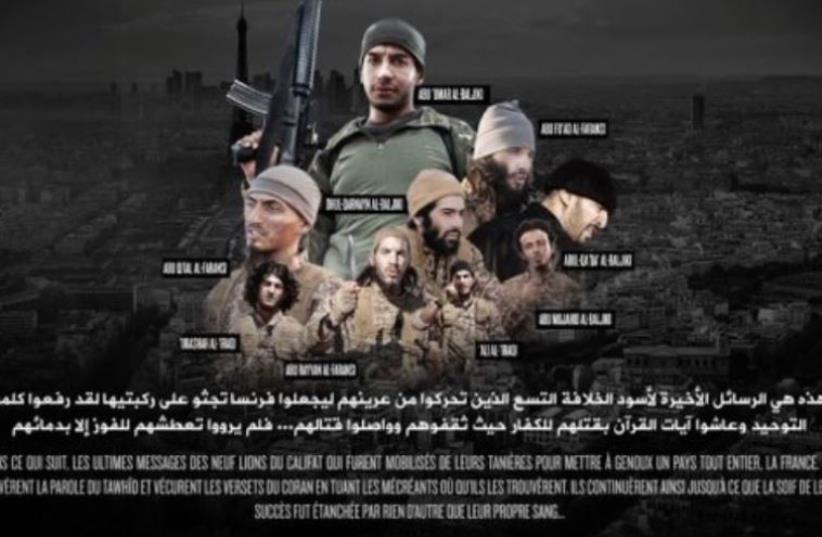 Islamic State video claims to show nine Paris attackers
(photo credit: screenshot)
Advertisement
France is the largest exporter of foreign fighters to Iraq and Syria with 900 militants traveling overseas, while Belgium exports the largest percentage of foreign fighters per capita, according to a study conducted by the International Center for Counter-Terrorism at The Hague. According to the policy brief, before the Arab Spring erupted in 2011, it was estimated that around 30,000 Muslim foreign fighters had left to fight in several conflicts in several countries, including Bosnia, Kashmir and the Philippines. Post-Arab Spring, the UN estimates as many as 30,000 foreign fighters from 104 countries have been drawn to the conflict in Iraq and Syria alone.According to a Europol, roughly 5,000 foreign fighters are of European origin.France was named as the largest exporter of foreign jihadists, with over 900 citizens making their way over to Iraq and Syria. Germany and England were titled as the second largest exporters of foreign fighters to the region.Belgium had by far the largest amount of foreign jihadists per capita, with 520 militants out of a population of 11 million. Nearly 18% of Belgians who joined ISIS returned to Belgium at some point.A study conducted in August 2014 found that 15% of French citizens polled viewed the Islamic State and its harsh policies as favorable.Roughly 40 percent of those fighting for the terror group in both Iraq and Syria are said to be foreign fighters. Additionally, at least 10 percent of foreigners who traveled to ISIS-controlled Syria were women and children.Foreign ISIS fighters returning to Europe, or European citizens influenced by Islamic State ideology have become imminent threats to European nations, particularly to Belgium and France who have been the target of large-scale terror attacks.Investigators believe that the recent double bombings which took place in Brussels, as well as the November attacks in Paris were carried out by militants from the same Islamic State network. Terrorists named in both attacks were from French or Belgian origin.Reuters contributed to this report.