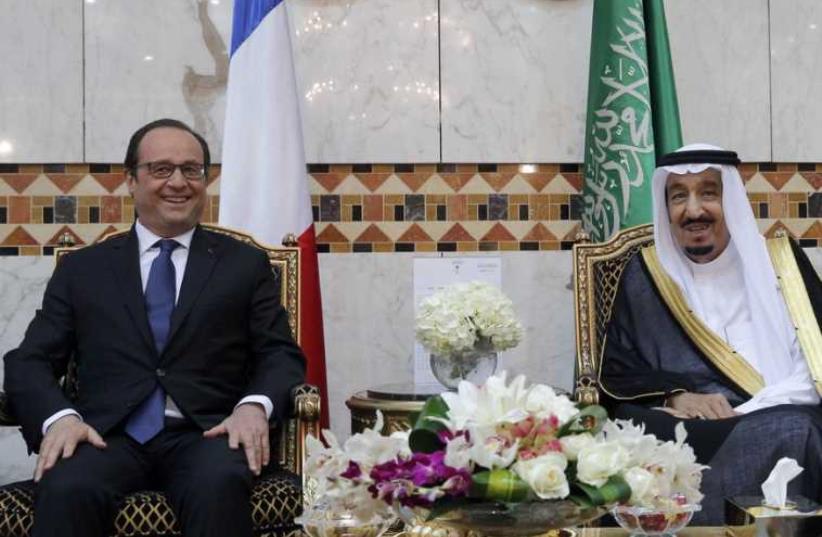 French President Francois Hollande and Saudi King Salman meet to dicuss regions affecting the Middle East
(photo credit: REUTERS)
Advertisement
France and Saudi Arabia believe that any future nuclear accord between Iran and six major powers must be robust, verifiable and no threat to Tehran's neighbors, the two countries said ahead of a summit in Riyadh on Tuesday.Saudi Arabia invited French President Francois Hollande, whose country is deemed to have the toughest stance among the six world powers negotiating with Iran, to Riyadh to discuss regional issues with Gulf Arab leaders who fear a rapprochement with Tehran could further inflame the region."France and Saudi Arabia confirmed the necessity to reach a robust, lasting, verifiable, undisputed and binding deal with Iran," Hollande and the new Saudi King Salman said in a statement after meeting on Monday."This agreement must not destabilize the security and stability of the region nor threaten the security and stability of Iran's neighbors," the statement said.Hollande met Salman for an hour after dinner at his personal palace on Monday, and the Saudi cabinet on Tuesday. The two men tackled Iran's role in the conflicts in Yemen and Syria and reiterated that there was no future for President Bashar Assad of Syria after four years of civil war there.Hollande was to address Gulf Cooperation Council leaders shortly to reassure them that France would not accept a bad deal with Iran as the powers try to meet a June 30 deadline.In the negotiations with six world powers, the Islamic Republic wants financial sanctions on it removed in exchange for restraints on its disputed nuclear activity."They (GCC) have a real fear that when sanctions are lifted, Iran will be able to finance all its proxies across the region," said a senior French diplomat. Iran backs Shi'ite Houthi rebels in Yemen and Assad in his battle with Sunni Muslim insurgents.Hollande's visit to Riyadh marked a period in which France has been able to nurture new links with the Gulf region in the face of perceived disengagement on the part of traditional ally the United States."They wanted us to come so they could say to the Americans, look, we also have France: it's up to you not to get edged out and to be here with us," said a second French diplomat.The new Saudi foreign minister, Adel al-Jubeir, told Reuters that France was a historical ally and trading partner that had proved its reliability to the Gulf."We have common views with regard to the challenges in the region today with Syria, Yemen, Iraq, terrorism and of course Iran's nuclear program, and there are very large commercial and military ties between our two countries."US Secretary of State John Kerry changed his schedule at the last minute this week to travel to Riyadh on Wednesday, looking to finalize plans for a summit at Camp David on May 13-14 between Gulf leaders and US President Barack Obama.US officials say they are seeking the best possible settlement with Iran and have cautioned that France's position privately is not as tough as it is publicly.