The suspected killer had ties in the past to a radical Islamist figure, though also had a history of anger problems. 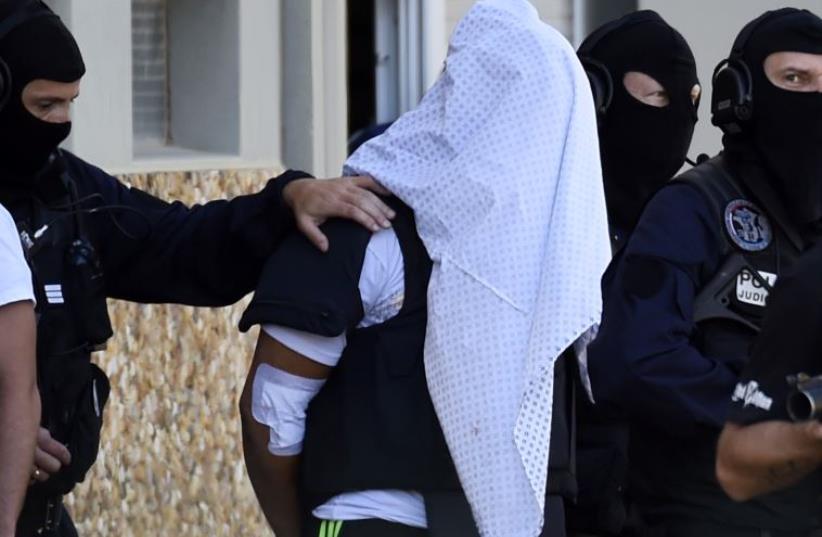 French police escort Yassin Salhi (C), a man suspected of decapitating his boss in an attack on a gas factory, as they leave his flat in Saint-Priest on June 28, 2015
(photo credit: PHILIPPE DESMAZES / AFP)
Advertisement
PARIS - Even as French investigators piece together a clearer picture of events that led on Friday to the beheading of a transport firm manager and attempted destruction of a chemicals plant, the real motivation of the chief suspect remains elusive.Yassin Salhi, the 35-year-old delivery man suspected of killing his boss, was a father of three with a permanent job and an apartment in a modest but peaceful suburb of the southeastern city of Lyon, and a clean criminal record.But Salhi had in the past frequented Islamic radicals and was one of thousands of hardliners who caught French authorities' attention among an overwhelmingly moderate Muslim population of five million.Sources close to the investigation said on Sunday that Salhi, after at first refusing to respond to interrogators, had confessed to killing his manager. Yet many grey areas remain in understanding Friday's attack on a secured industrial site at the heart of one of Europe's top transport hubs.Initial searches on his home turned up no weapons cache, propaganda material or evidence of accomplices. Possibly the most troubling detail thrown up by the probe so far is that he sent by "Whatsapp" a macabre selfie posing with the severed head to a Canadian telephone number.This is a far cry from the detailed body of facts amassed around the three gunmen behind January's Islamist attacks in Paris, where investigators found a weapons haul at the home of one killer and evidence that another had arms training in Yemen. A third was known to have been radicalized in prison.According to local media, Salhi told police he argued with his boss and his wife before the killing and wanted to commit suicide. Le Parisien daily cited a martial arts instructor as saying the otherwise calm Salhi was subject to such outbursts of rage that other pupils refused to spar with him.That the suspect gave the killing the appearance of an Islamist strike is so far not sufficient to convince investigators that he was motivated by a jihadist ideology."We don't know whether we're dealing with a fundamentalist who flipped or a real terrorist," one source close to the investigation said."Investigators are wondering whether this isn't just a simple criminal act."
STRANGULATION MARKSInterviewed on French radio minutes after Friday's events became known, the distraught-sounding wife of Salhi said he had set off from home around 7:00 a.m. for the 6-km (4-mile) car ride to the small transport firm that employed him.There he met up with Herve Cornara, his 54-year-old manager. Cornara's wife, who helped him run the business, saw them together around 7:30 a.m. before she herself went off to make a delivery, according to sources cited by Le JDD weekly newspaper.What happened between then and 9:28 am, the moment at which prosecutors say video surveillance cameras saw Salhi's Peugeot Boxer pull up at the gate of US-based gas and chemicals group Air Products in nearby Saint-Quentin-Fallavier, is a mystery.While the autopsy on the victim has revealed strangulation marks, investigators say it is not clear whether he died by decapitation. For now, Salhi has said only that the killing took place in an as yet unidentified car park.As someone who had made deliveries to the site in the past, Salhi passed without problem through the gates of the Air Products premises and then out of sight of the video cameras for roughly seven minutes.That, investigators suggest, may have been when he pinned the head of his boss to the wire fence alongside flags bearing references to the Muslim profession of faith.Cameras once again briefly picked up the van around 9:36 am as it accelerated in the direction of a warehouse within the premises containing gas canisters. A loud explosion was heard.When emergency services arrived a few minutes later, they found the headless body of the victim by the van, a knife nearby and a fake pistol. They overpowered the suspect as he was opening bottles of acetone, a flammable liquid chemical.French anti-terrorist laws give authorities 96 hours to hold a suspect before deciding whether to press charges. Salhi is currently detained in Lyon but could be transferred to a facility just outside Paris as early as Sunday."He has started to speak about what happened, to explain the circumstances," said one source. His wife, sister and a third person have all been released from custody.For now, investigators insist it is too early to speculate on the significance of the "selfie" message to a Canadian mobile number, dismissing media speculation the recipient is in Syria.Likewise, Salhi's contacts in 2003 and 2004 with a known Islamic radical when he was living in eastern France are being handled cautiously. The radical in question has since left for Indonesia but is not suspected of any crime.For French authorities, the case shows yet again that there are no easy answers against a threat on its soil that is ever- present but largely hidden under the surface.Prime Minister Manuel Valls estimated on Sunday there were between 10,000-15,000 followers in France of hard-line Salafism, a radical brand of Islam often associated with support for offensive jihad against those defined as its enemies. He said it was a possible "antechamber of terrorism".But it emerged after the January killings that a proper surveillance operation on just one suspect could involve up to 30 operatives, making it largely impossible to keep tabs on everyone considered a potential risk."We live in a world where this threat will be non-stop," Valls noted. "There is no zero risk."