The central demonstration will take place in the famous Tahrir Square in Cairo, while additional protests are expected to take place in other Egyptian provinces. 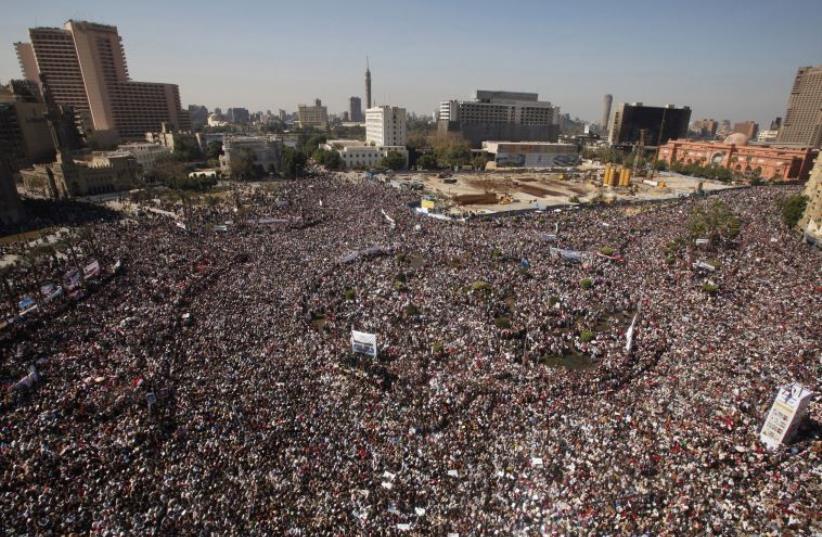 Opposition supporters attend Friday prayer in Tahrir Square in Cairo February 11, 2011
(photo credit: REUTERS)
Advertisement
Egyptian social media activists called on all Egyptians to take to the streets on Friday to protest Cairo’s ceding of the Red Sea islands of Tiran and Sanafir to Saudi Arabia as part of a new agreement between the states on maritime borders.The mass demonstrations, organized by a group named "January 2011 Revolution," were being held under the banner, "The land is the honor," rejecting the decision of the Egyptian regime to "sell part of Egypt" to the Saudi kingdom. A drawing of the two disputed islands, as well as their names, appeared on the invitation created for the event on Facebook.The central demonstration will take place in the famous Tahrir Square in Cairo, while additional protests are expected to take place in other Egyptian provinces. More than 34,000 Egyptians confirmed their attendance on Facebook, and the organizers said they want at least a million people to participate in the mass protests. In addition to possible attempts by the Egyptian security apparatus to disrupt the demonstrations, the group organizing the event is also expected to face political pressures to turn the mass protests into an anti-Sisi pageant. "We reject the attempts of some Muslim Brotherhood members and other forces to ride the wave of our planned activity on Friday. We do not allow any political movement to harness this activity to its own interests. The main aim of this event is to protect the land and the Egyptian sovereignty. We warn all participants not to raise banners of the Muslim Brotherhood or of any other political force," The "January 2011 Revolution" wrote on Facebook.In a move that illustrates how controversial the Egyptian-Saudi deal over the islands is, a petition against the move was published on Tahrir News, an Egyptian news site. Titled "no to renouncing Tiran and Sanafir islands," the petition states that by renouncing the Red Sea islands, Egypt's government violates paragraph 150 in the Egyptian constitution, according to which "it is prohibited to sign any agreement that requires Egypt to forego part of its land."