Fighters arrest Saif al-Islam in Libyan desert, vow to hold him in mountain town of Zintan until they are able to hand him over to authorities.

By REUTERS
NOVEMBER 19, 2011 19:16
Saif al-Islam Gaddafi 311 (R)
(photo credit: REUTERS/Libya Free TV via Reuters TV)
Advertisement
ZINTAN, Libya - Muammar Gaddafi's son Saif al-Islam has been captured, scared and with just a few thousand dollars, in the Libyan desert by fighters who vowed to hold him in the mountain town of Zintan until there was a government to hand him over to.The fighters claimed his capture as gunfire and car horns expressed jubilation across Libya at the seizure of the British-educated 39-year-old who a year ago was set for a dynastic succession to rule the oil-producing desert state.RELATED:
'Gaddafi son, Saif al-Islam, offers to surrender to Hague'
NTC officials: Gaddafi and son buried at dawn in LibyaSaif al-Islam, who vowed to die fighting but was taken without firing a shot, was arrested overnight, officials said, and he was not injured during his seizure -- unlike his father, who was killed a month ago on Sunday after being captured in his home town."At the beginning he was very scared. He thought we would kill him," Ahmed Ammar, one of his captors, told Reuters.Saif al-Islam told Reuters that he was okay and that his hand was bandaged due to wounds sustained in a NATO air strike a month ago. Asked by Reuters on the Soviet-made cargo plane which flew him to the town of Zintan if he was feeling all right, Gaddafi said simply: "Yes." 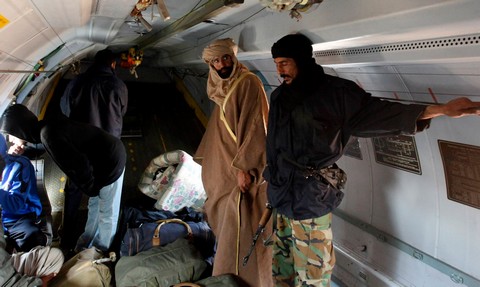 Saif al-Islam Gaddafi is seen standing in a planeThe Zintan fighters, who make up one of the powerful militia factions holding ultimate power in a country still without a government, said they planned to keep him in Zintan, until they could hand him over to the authorities.Prime minister-designate Abdurrahim El-Keib is scheduled to form a government by Tuesday, and the fate of Saif al-Islam will be an early test of its authority. Libyans want to try him at home before, possibly, handing him over to the International Criminal Court which accuses him of crimes against humanity.The European Union urged Libyan authorities to ensure Saif al-Islam was brought to justice in cooperation with the ICC whose prosecutor is heading for Libya soon to discuss where and how the legal process will take place.Libyans believe Saif al-Islam holds the keys in his head to billions of dollars of public money amassed by the Gaddafi family but when captured, his captors said, they found only a few thousand dollars and a cache of rifles in seized vehicles.Ammar told Reuters that his unit of 15 men in three vehicles, acting on a tip-off about a possible high-profile fugitive had intercepted two cars carrying Gaddafi and four others in the desert about 70 km (40 miles) from the small oil town of Obari at about 1:30 a.m. (2330 GMT on Friday)."We have arrested Saif al-Islam Gaddafi in (the) Obari area," Justice Minister Mohammed al-Alagy told Reuters, adding that the younger Gaddafi was not injured.After the fighters fired in the air and ground to halt the cars, they asked the identity of the passengers. The man in charge replied that he was "Abdelsalam" - a name that happens to mean 'servant of peace'. But the fighters quickly recognized Saif al-Islam and seized him without a fight.The fighters put him at ease and he accepted that he would be taken to Zintan, a town in the western mountains south of Tripoli that was a stronghold of anti-Gaddafi rebels.A crowd of hundreds thronged the runway in Zintan, preventing his captors removing the prisoner for an hour. Some people tried to board the plane but were held back by the fighters, who all came from Zintan.Saif al-Islam appeared relatively at ease and was not handcuffed as he sat on a bench at the rear of the plane.Wearing traditional robes with a scarf pulled over his face, Saif al-Islam had a heavy black beard and wore his rimless spectacles.His thumb, index and another finger were heavily bandaged from the wounds sustained in the NATO strike.
Advertisement
Subscribe for our daily newsletter