In the audience, Alaa Abu Qassem, a Gaza student who had never been to the movies before, reveled in the new experience. 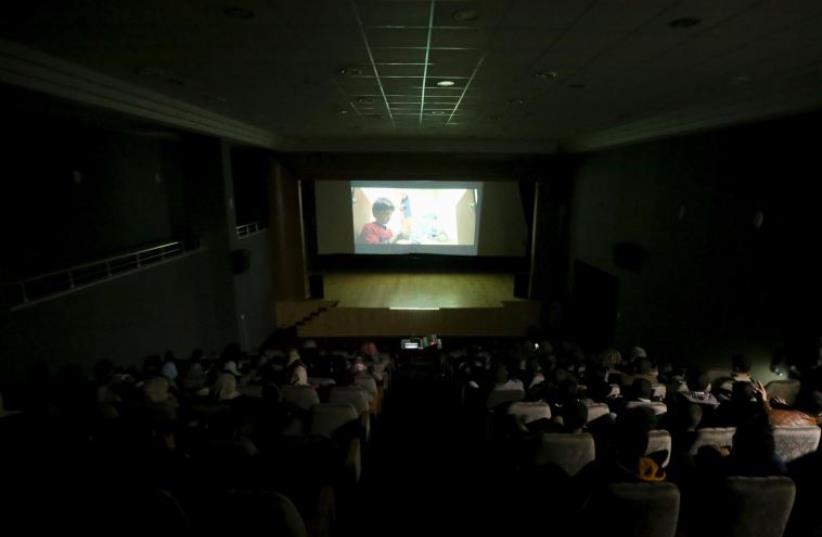 Palestinian spectators watch a movie at Red Crescent Society hall in Gaza City February 25, 2016.
(photo credit: REUTERS)
Advertisement
Palestinians in the Gaza Strip are enjoying their first night out at the movies since political tensions led to the torching of cinemas in the enclave 20 years ago.Hollywood blockbusters have yet to return and Hamas Islamists, who now rule Gaza, are looking out for anything they consider immodest. Nevertheless, the projectors are rolling again, in a newly-opened cinema whose shows have been limited so far to films about the Palestinian struggle for statehood.About 150 people took their seats last week in the Red Crescent Society hall, usually a venue for celebrations or traditional performances, to watch "Oversized Coat". The 2013 film by Jordan-based Palestinian director Nawras Abu Saleh examines Palestinian life between 1987 and 2011, a period of failed peace efforts and two anti-Israeli uprisings.Tickets cost 10 shekels ($2.50) each.In the audience, Alaa Abu Qassem, a Gaza student who had never been to the movies before, reveled in the new experience."I am very happy," said Qassem, just a toddler when the last of Gaza's cinemas were burned to the ground during fighting between rival Palestinian factions. "But where is the pop corn?"Cinema once flourished in Gaza. Back in the 1950s, when Egypt ran the enclave, residents used to frequent movie houses to watch Arab, Western and Asian films. Those cinemas were set on fire in 1987 when the first Palestinian uprising erupted. All were repaired, but were torched again during internal violence in 1996.Faded movie posters, some in Hebrew and dating back two decades when Gaza was under Israeli occupation, still hang on the charred walls of what had been one of the territory's biggest cinemas.Its windows were smashed long ago and graffiti either glorifying the fight against Israel or advertising local businesses have been scrawled on the building.The picture was dramatically different at last Thursday's screening in the Red Crescent Society hall.Families came for a night out and once the lights dimmed, some in the audience used their cellphone cameras to make a movie of their own of the event."Gaza is hungry for a cinema ... depriving people of cinemas and theaters in Gaza is a violation of their humanity," said Basel Al-Attawna, a Gaza theater director who had in the past watched movies at the old movie houses.OVERFLOW CROWD

With Israel and Egypt tightly controlling Gaza's borders, most of its 1.9 million inhabitants cannot travel outside the enclave, where Islamist mores have taken root. Movies are watched in private, at home, on television or DVDs.Hussam Salem, of the Ain Media company that sponsored the screening last week, said the initiative began two months ago when an overflow crowd of about 250 people came to the Red Crescent Society hall to watch the first movie.The company had originally planned to hold a weekly screening on Saturdays, but added a second show during the week in response to requests on its social media page.At Thursday's event, audience members said that while movies highlighting the Palestinian struggle were fine, they also wanted to watch Egyptian films and Western features with action stars like Tom Cruise or Sylvester Stallone.Salem said movies' contents had to be approved by Gaza's Hamas-run Interior Ministry before they could be shown. That could mean, he said, editing on his part that would expunge scenes that could be deemed immodest - even a kiss.Salem said he had yet to encounter such a scenario since the films he has selected so far have "suited the traditions and values we were brought up on".Locked in conflict with Israel and vying against secular Palestinian rivals in the occupied West Bank, Hamas has long invested in television- and Internet-based news, educational shows and even animated clips that advance its political views.But independent artists say authorities have been quick to veto content that does not conform to Islamic edicts in the conservative enclave. Hamas has described its intervention in film and television productions as minimal.