Muhammed Abu Asi, a vendor whose sea-side stand provides food and refreshment to Gaza's beach-goers, was rushed to ER after purposefully swallowing poison. 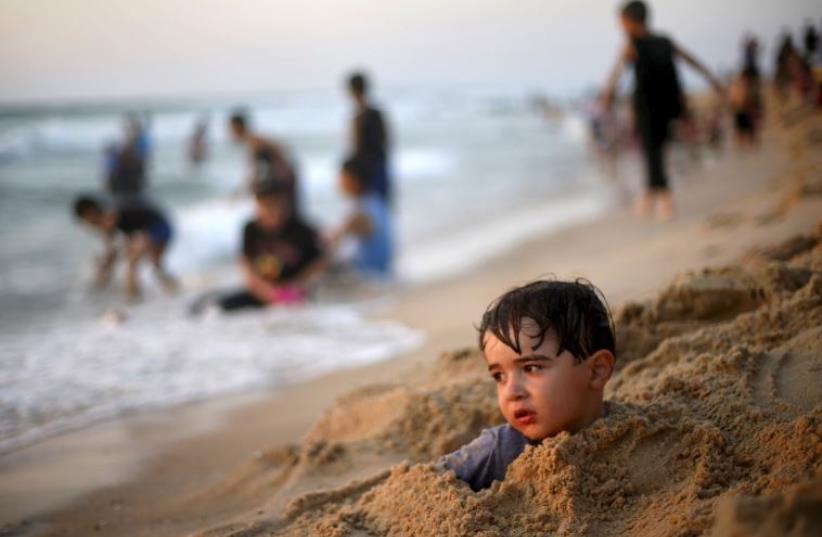 Palestinian boy buries himself in the sand at beach along the Mediterranean Sea in the northern Gaza Strip July 24, 2015.
(photo credit: REUTERS)
Advertisement
A Palestinian resident of Gaza attempted suicide on Saturday night in order to protest his alleged repeated harassment by the Hamas-ruled Strip's municipal authorities.According to Palestinian news agency Ma'an, Muhammed Abu Asi, a vendor whose sea-side stand provides food and refreshment to Gaza's beach-goers, was rushed to an emergency room after purposefully swallowing poison. Asi's sister, speaking for the ill businessman, explained that her brother tried to take his own life because Gaza municipality inspectors, who had previously torn down his kiosk, recently began harassing her brother after a charity had helped him re-build the stand. Gaza's municipality fervently denied the accusations made by Asi's sister, saying that his business was never a target. They also added that they "can't be held responsible for what happened with Muhammad" and that they "strongly sympathize with him and wish him a quick recovery."Abu Asi's sister, however, remained adamant that her brother was the target of a plot, directing blame specifically at the mayor of Gaza City and warning that her family will be taking legal action against the municipality officials.