In response to the decision to suspend him, Professor Jadallah accused The Islamic University of “fostering the culture of silencing its sons from an early age." 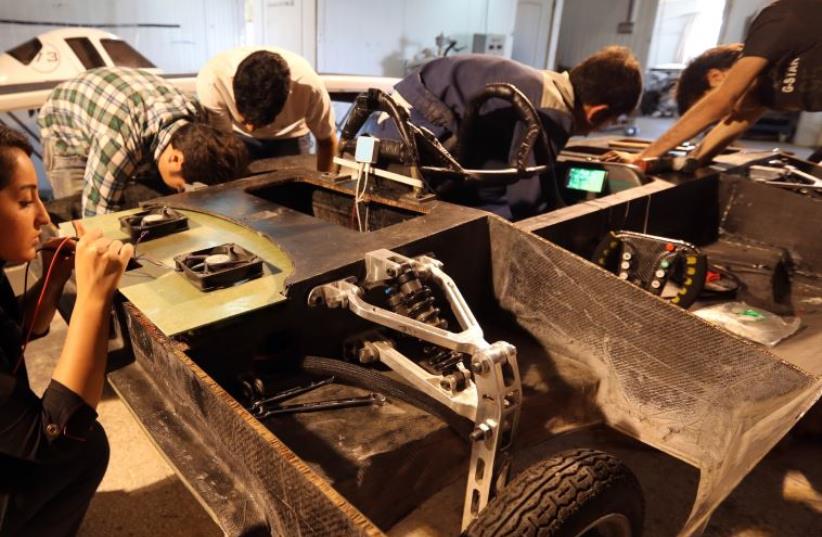 Students at Qazvin Azad Islamic University, west of Tehran, assemble a solar-powered Havin-2 vehicle for a test drive
(photo credit: ATTA KENARE / AFP)
Advertisement
A Palestinian professor has been suspended by The Islamic University in the Gaza Strip because of Facebook posts criticizing Hamas and the university administration.Professor Salah Jadallah, who teaches at the Biology and Biotechnology Department, is one of the founders of Hamas in the Shati refugee camp, where Hamas leader Ismail Haniyeh lives. On March 19, he received a letter from the university administration notifying him of the decision to suspend him and bring him before a commission of inquiry. The decision has drawn sharp criticism and protests from many of the Manchester-educated professor’s colleagues and students. Professor Jadallah posted several comments on his Facebook account in which he complained about Hamas’s autocratic rule over the Gaza Strip. He has also accused Hamas of corruption. In one post he launched a scathing attack on the Hamas-affiliated university administration: “Some low-class folks in the university, which claims to be divine, are trying to lick the shoes of students in order to keep their jobs and avoid being transferred to another university.”In response to the decision to suspend him, Professor Jadallah accused The Islamic University of “fostering the culture of silencing its sons from an early age. This is disgraceful.”