GOP hopeful Carson meets Syrian refugees in Jordan, but opposes them coming to US

Journalists were not invited to join Carson, one of the leading contenders for the Republican nomination in the November 2016 presidential election. 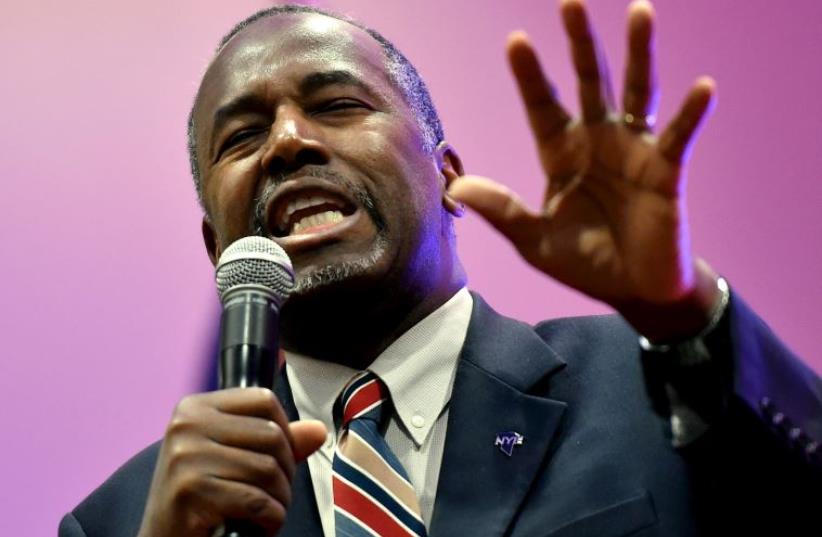 US Republican presidential candidate Ben Carson speaks at a campaign event in Pahrump, Nevada
(photo credit: REUTERS)
Advertisement
Republican presidential candidate Ben Carson, who last week compared Syrian refugees to "rabid dogs," met with refugees in Jordan on Saturday and urged the US government to do more to help but did not endorse bringing them to the United States.Carson, a retired neurosurgeon who has faced scrutiny over his foreign policy credentials, visited the Zaatari camp for refugees fleeing Syria's civil war, and said he also spoke with medical personnel, humanitarian workers and government officials.Journalists were not invited to join Carson, one of the leading contenders for the Republican nomination in the November 2016 presidential election. He arrived in Jordan on Friday. His campaign released a statement and posted photographs on its website showing Carson meeting with refugees, including a black-and-white image showing him placing his hand atop the head of a baby apparently sleeping in a bed.In the statement, Carson praised Jordan's efforts to help the refugees. "But Jordan is a small country. They need the world's help to feed, educate and care for these refugees until the war ends," Carson said.He said that "the United States must do more," the rest of the world "could be doing so much more" and "we must find a political end to this conflict."Carson did not advocate bringing Syrian refugees to the United States. "Until it is safe for them to return home, Jordan is a safe place for them to wait," Carson said."Bringing 25,000 refugees to the United States does nothing to solve this crisis. Jordan already houses 1.4 million refugees. Jordan needs and deserves our help," the statement added.Carson's campaign, without explanation, later on Saturday issued an updated version of the statement changing those sentences to read: "We can do our part to help this crisis without bringing 10-25,000 refugees to the United States. Jordan already houses 1.4 million refugees. Jordan needs and deserves our logistical help and financial support."It was not clear what Carson was referring to when he mentioned 25,000 refugees.President Barack Obama's administration has said it will accept 10,000 Syrian refugees into the United States over the next year, a plan sharply criticized by many Republicans. Canada has said it will accept 25,000 Syrian refugees by the end of February.Several state governors, mostly Republicans, have expressed opposition to having Syrian refugees resettled in their states, expressing concern in the wake of the Nov. 13 attacks in Paris, claimed by Islamic State, that Islamist militants might try to enter the United States under the guise of being refugees.On Nov. 20, Carson said at a campaign event in Alabama that allowing Syrian refugees into the United States would endanger Americans. Carson said of Syrian refugees: "If there is a rabid dog running around your neighborhood, you're probably not going to assume something good about that dog."Obama on Thursday said refugees undergo the highest security checks of anyone traveling to the United States.