Revolution could have led to the end of Turkish aid for Gaza. 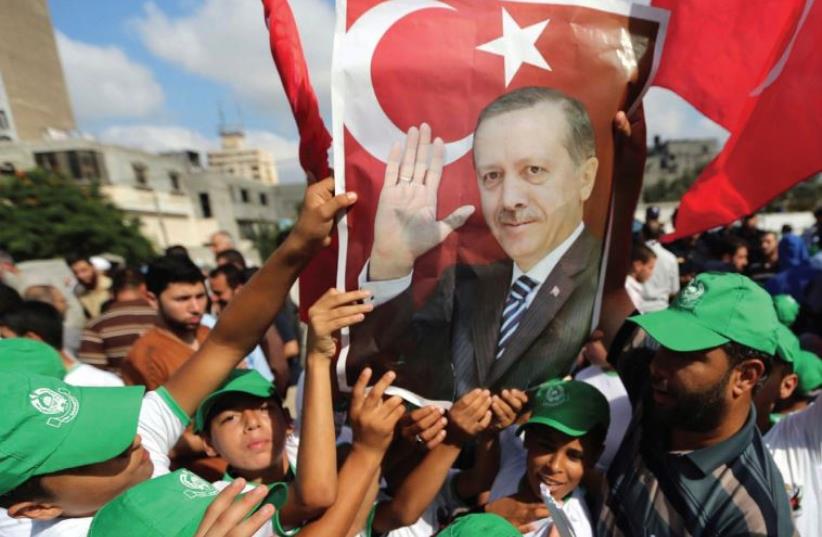 PALESTINIANS HOLD a poster of President Tayyip Erdogan during a demonstration yesterday in Gaza in support of the Turkish government.
(photo credit: REUTERS)
Advertisement
Hamas condemned the attempted coup in Turkey on Saturday, issuing a strongly worded statement in support of Turkish President Recep Tayyip Erdogan and his government.“We in Hamas and the Palestinian people condemn the sinful attempt to stomp on the democratic choice of the brotherly Turkish people.” The statement continued, “We express our congratulations to the great Turkish people, its elected leadership, President Erdogan, its political parties, security forces, and its army on its mighty victory in preserving democracy, freedom, and stability in Turkey.”Saturday afternoon, thousands of demonstrators took to the streets, raising pictures of the Erdogan, Turkish flags and posters condemning the attempted coup. Hamas had called on Palestinians to demonstrate Sunday in support of Erdogan and the Turkish government.A number of Hamas leaders also individually condemned the attempted coup. Spokesman Ismail Radwan denounced the attempted coup at one of demonstrations in Gaza City, calling it “a wicked attempt to overthrow legitimacy in Turkey.”Mushir al-Masri, a Hamas Palestinian Legislative Council (PLC) member, delivered a fiery speech at a rally in Gaza City, praising the Turkish government for defeating the coup. “The Turkish nation has won by the grace of God and will remain an economic and military citadel, protecting Turkey and the issues of the Arab and Islamic nations,” he said.Masri added that Hamas is prepared to make sacrifices for the sake of Turkey.“We are ready to sacrifice our blood for the Turkish people, and... for Istanbul,” he said.Some Hamas leaders blamed the US and Arab countries for the failed coup.Younes al-Astal, a Hamas leader, said that the elements of the Turkish army are not solely responsible for the plot to overthrow the government. “What happened was not purely a Turkish conspiracy but rather an international conspiracy. The greatest proof of that is the Western and Arab media promoting the success of the coup to make people believe it happened, and plant fear and despair in them,” he said.For its part, the Palestinian Authority’s Foreign Minister Riyad al-Maliki called his Turkish counterpart Foreign Minister Mevlut Çavusoglu, congratulating him on defeating the coup and preserving democracy, according to Wafa, the official Palestinian news site. Maliki stated further that the Palestinian government stands with Turkey and its government and has full confidence in its leadership and people.Mkhaimar Abusada, a professor of political science at Al-Azhar University in Gaza, told The Jerusalem Post that if the attempted coup had succeeded, it would have marked a major loss for Hamas.“Hamas would have been deprived of Turkey’s political, financial and humanitarian support,” he said. Abusada added that Hamas has had high expectations of Erdogan since Operation Cast Lead in 2008-2009, after which he blamed Israel for the killing of Palestinian civilians.Abusada also posited that if elements of the Turkish army had overthrown the government, Hamas would not have received the benefits of the recent Israeli-Turkish reconciliation deal. “In the event of a military coup, Hamas would have had to say goodbye to the desalinization plant, power station and humanitarian assistance, which were a part of the Turkish-Israeli reconciliation deal,” he said.Abusada concluded, “All these factors explain why Hamas took to the streets in celebration.”Meanwhile, many Israeli Arabs also condemned the coup attempt and celebrated Erdogan’s survival, with dozens from the Islamic Movement demonstrating in Kafr Kana on Saturday, according to the Israeli Arab media.Joint List MK Ahmad Tibi (Ta’al), who was one of the first Israeli politicians to respond, condemned the coup attempt in a post on Facebook on Saturday morning, saying that “whoever believes in the values of democracy and freedom cannot accept such a military coup.”He added that Erdogan was elected by the people, and they made their voices heard.Joint List MK Taleb Abu Arar, from the United Arab List party which is associated with the southern branch of the Islamic Movement, congratulated Erdogan and noted that Muslims closely monitor events in the Islamic world.“I congratulate the Turkish people who expressed and supported the democratic decision, and Erdogan will continue to lead and not a bunch of delusional people who want to destroy and return Turkey to dark days,” the Arab MK asserted.