Death toll of Shi'ite Lebanese group up to 22, while the number of Sunni jihadists killed is estimated to be in the hundreds. 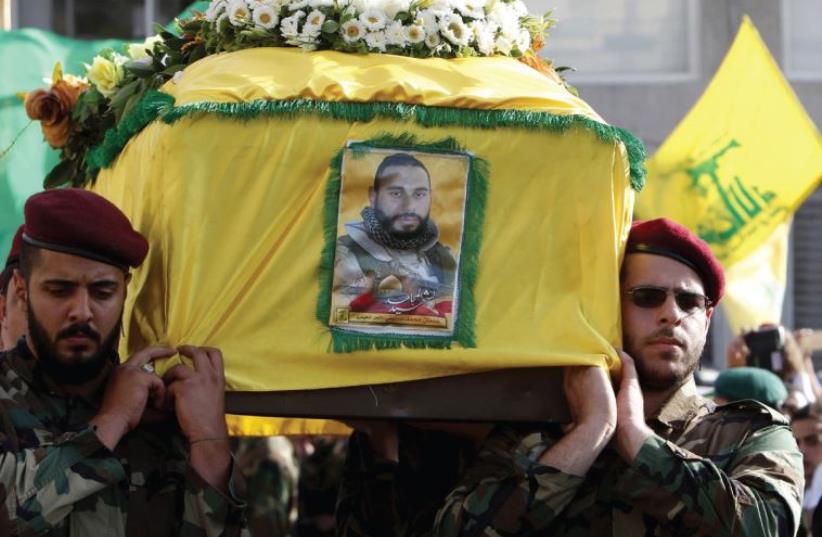 HEZBOLLAH MEMBERS carry the coffin of Adnan Siblini on Tuesday, who was killed in the Qalamoun region, during his funeral in al-Ghaziyeh.
(photo credit: REUTERS)
Advertisement
Shi’ite Hezbollah lost six fighters and the Sunni jihadists 30 in ongoing battles in the Lebanon-Syria border region of Qalamoun.Hezbollah fighters suffered six dead on Monday as they took control of the Tallaja hilltop, a security source told the Lebanese Daily Star newspaper on Tuesday.The source added that four additional Hezbollah fighters were killed elsewhere in Syria, bringing the total killed to 10. Hezbollah confirmed on Tuesday that nine of its fighters were killed.These deaths brought the total number of Hezbollah dead to at least 22, while the number of jihadists killed is estimated to be in the hundreds, since the Qalamoun offensive began on May 4, according to the report published on Wednesday.The Hezbollah and Syrian Army offensive has pushed the rebels toward Lebanon’s northeastern border town of Arsal.The Shi’ite group’s fighters ambushed jihadists from al-Qaida’s Nusra Front in the border region on Wednesday with the aid of a surveillance drone, a security source told the Hezbollah-run al-Manar media outlet.Al-Manar posted a video on its website supposedly showing the ambush of the jihadists.Meanwhile, the United States on Wednesday commended Saudi Arabia for imposing sanctions on two senior officials of the Iranian- backed Hezbollah and designating them as terrorists.The US designated the two officials, Khalil Youssef Harb and Mohammed Qabalan, in 2013 for overseeing “violent operations” in the Middle East.Saudi state news agency SPA said on Wednesday that Harb was a military commander in charge of Hezbollah’s activities in Yemen and that Qabalan had been convicted by an Egyptian court in absentia in 2010 for activities in the country.“As long as Hezbollah seeks to spread chaos and instability and carries out terrorist attacks and carries out criminal and illegal activity around the world, the Kingdom of Saudi Arabia will continue to designate activists and leaders and entities of Hezbollah and impose sanctions on them,” a statement said.A Syrian Kurdish militia has captured a town from Islamic State in the Northeast, a group monitoring the war reported on Wednesday, compounding recent losses for the jihadists in a strategic corner of Syria.The capture of the town of al-Mabroukah by the YPG militia opens the road for its forces to advance toward the Islamic State’s stronghold in Raqqa province, the Syrian Observatory for Human Rights reported.While losing ground in the Northeast, Islamic State has launched a new offensive in central Syria where it has seized wide areas from the Damascus government, including the ancient city of Palmyra, also known as Tadmur.The YPG, supported by US-led air strikes, have been making steady gains this month against Islamic State in the Northeast, which is important in the battle against the jihadists due to its location bordering territory held by the group in Iraq.The Syrian military also has captured territory from Islamic State in the same region, the Observatory said.The Observatory said the YPG had seized control of 4,000 square kilometers in this month’s advance.The YPG has emerged as the only notable partner on the ground for the US-led alliance bombing Islamic State in Syria. The United States has rejected the idea of partnering with President Bashar Assad, saying he is part of the problem.Reuters contributed to this report.