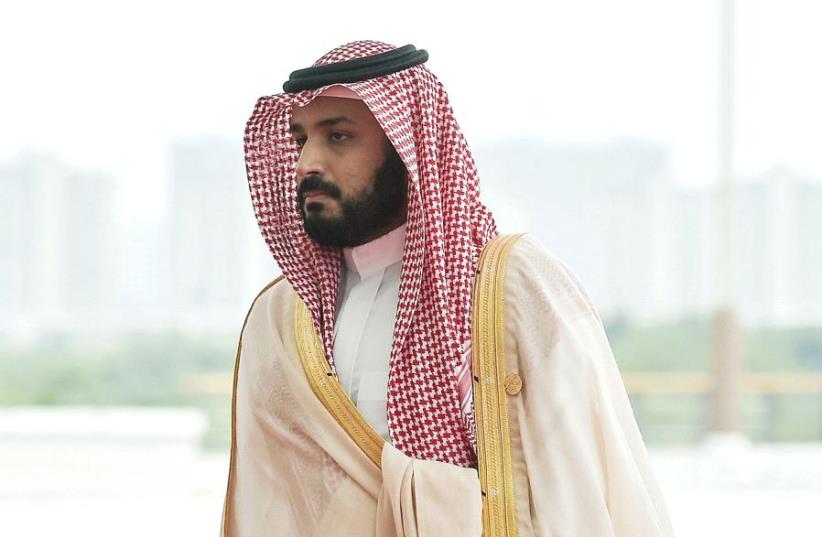 Deputy Crown Prince, Second Deputy Prime Minister and Minister of Defense Muhammad bin Salman Al Saud arrives to attend the G20 Summit in China last year
(photo credit: REUTERS)
Advertisement
Saudi Arabia's sweeping anti-corruption crackdown may have ended but it has left an indelible mark on the kingdom's image and economic outlook, analysts contend.Officials in the Gulf kingdom concluded a nearly 15-month long probe in which more than 200 of princes and business moguls were detained and over $100 billion in assets seized. Saudi authorities said a total of 381 people, including witnesses, had testified during the campaign and that settlements were reached with 87 of them who confessed to charges. At least 56 other cases have not yet been settled.Crown Prince Mohammed bin Salman, also known as MBS, ordered the clampdown in November 2017. Many members of the country's political and economic elite were held and questioned at Riyadh's upscale Ritz-Carlton Hotel, whereas others were reportedly jailed and tortured, a claim Saudi authorities deny.While real estate, cash and other assets were forfeited, the overall results of the purge remain unclear due to a lack of government transparency, according to Dr. Yoel Guzansky, a former Israeli National Security Council adviser and currently a Senior Researcher at the Tel Aviv-based Institute for National Security Studies."The Saudis say it's over and that they succeeded in getting over $100 billion but I really doubt it," he told The Media Line, adding that the initiative was meant to enable MBS to consolidate power. "The timing of the ending of this campaign is related to mounting pressure from the international [arena] and U.S. Congress after the murder of [journalist Jamal] Khashoggi."Last October, Khashoggi was murdered by Saudi agents inside the kingdom's Istanbul consulate, sparking worldwide furor and criticism of Riyadh's human rights record."The biggest issue for the kingdom, however, is perhaps the fear of outside investors not coming to the country," Dr. Guzansky noted. "I think this episode really frightened investors."Saudi Arabia has grown increasingly interested in boosting foreign investment in order to strengthen and diversify its oil-based economy. But figures released by the United Nations show that foreign direct investment in the kingdom plunged to a 14-year low of $1.4 billion in 2017, down from $7.5 billion in 2016."The impact [of the crackdown] was negative, not just diplomatically and politically but especially economically," Dr. Guzansky explained. "People not only stopped sending money and investing in Saudi Arabia, but rich Saudis tried to get their money out of the kingdom and some succeeded."David Butter, a political and economic analyst at the London-based Chatham House organization, similarly questioned the motives behind the campaign."I am not sure what precisely the aims were: Getting some money? Asserting power? On balance, the impact was negative as it created elevated risk of expropriation for private investors and spurred capital flight."It also prompted Saudi families with some wealth to seek residence rights and even nationality abroad—for example in Cyprus, Malta and Turkey," Butter told The Media Line.Karen Young, a resident scholar at the American Enterprise Institute, echoed the sentiment and said it was difficult to assess whether the campaign had been successful."We don’t know exactly what the aim was in the fall of 2017. It was always as much about centralizing authority by the crown prince as it might have been about changing established business practice, especially in government contracting," she told The Media Line."The anti-corruption committee’s work is over as abruptly as it started, and we still have little information about the 87 settlements achieved after confession, and due process that those individuals may or may not have received while detained."For more stories go to themedialine.org.