IDF: Israel will not open borders to Syrians, humanitarian aid to continue

Some 45,000 Syrians have fled to the borders of Jordan and Israel amid heavy regime offensive.

The IDF sends aid to Syrians fleeing Daraa in overnight `Good Neighbor` operation (IDF Spokesperson's Unit)
Advertisement
The IDF will not allow the entry of Syrians, who are fleeing a regime offensive, into Israel but will continue providing aid for those in tent camps in the Syrian Golan Heights, the IDF announced on Friday.“The IDF is monitoring the events in southern Syria and is preparing for a variety of scenarios, including continued humanitarian assistance to fleeing Syrians. We will not allow passage of Syrians fleeing the country and will continue to defend Israel's security interests,” read a statement released by the IDF Spokesperson’s Unit.Nevertheless on Thursday night, IDF forces delivered 300 tents, 13 tons of food, 15 tons of baby food, three palettes of medical equipment and medicines as well as 30 tons of clothing and footwear which were transferred in a “special” operation at four different locations. 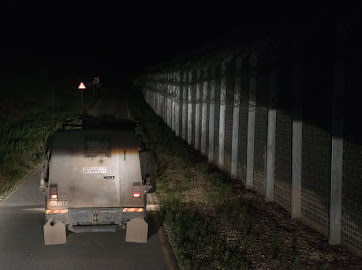 The IDF sends aid to Syrians fleeing Daraa in overnight `Good Neighbor` operation. (IDF Spokesperson's Unit)“This is a specific aid that the IDF and the State of Israel have transferred to the Syrians in camps in the south and in the center of the Syrian Golan Heights, in which thousands of Syrians live in poor conditions without access to water, electricity, food or basic necessities,” read the statement.Zionist Union MK Saleh Saad, a Druze from the north, called on the government on Thursday to provide humanitarian aid to those fleeing, saying that Israel “cannot remain indifferent” to the situation on it’s northern border.“The situation on the Syrian Golan Heights cries out for a creative solution. The State of Israel cannot remain indifferent to the humanitarian situation of the displaced citizens,” he emphasized in a statement. “I would like to propose as a solution that we establish a temporary town on the border for Syrian refugees which will provide humanitarian necessities until the international community decides on a permanent solution.” 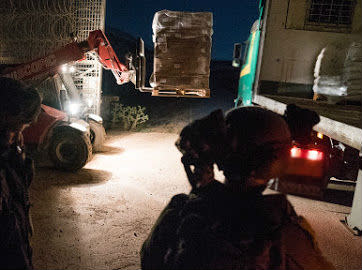 The IDF sends aid to Syrians fleeing Daraa in overnight `Good Neighbor` operation. (IDF Spokesperson's Unit)Defense Minister Avigdor Liberman stated Sunday that Israel is “closely monitoring the situation in southern Syria” and is working to “preserve” Israel’s security interests.“As always we will be prepared to provide any humanitarian aid to women and children, but we will not accept any Syrian refugees in our territory.” The IDF has been providing life-saving humanitarian assistance to Syrians in the Golan Heights as part of Operation Good Neighbors launched in June 2016 while maintaining the principle of non-involvement in the Syrian civil war.Last year a senior IDF officer stated that  "this project has a significant impact on Israel's security," adding that "we have learnt from the Americans who lost the Iraqi population. We realized that we could do more for the population near our border than what we were doing at the time."The humanitarian assistance delivered on Thursday morning comes as the Syrian army backed by Iranian Shiite militias and Hezbollah have pummelled the southwestern provinces of Dara’a and Quneitra in an offensive aimed at recapturing the strategic areas bordering Jordan and the Golan Heights from rebels. 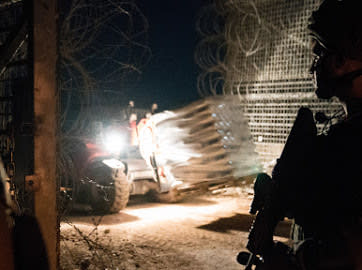 The IDF sends aid to Syrians fleeing Daraa in overnight `Good Neighbor` operation. (IDF Spokesperson's Unit)According to The Syrian Observatory for Human Rights air strikes had killed 46 people, including children, since Wednesday in rebel-held parts of Daraa known as the cradle of the Syrian uprising.The United Nations fears that some 45,000 people have fled and have headed towards the border with Israel and Jordan, which has also stated that its borders will remain closed to the fleeing Syrians.On Thursday IDF chief Gadi Eisenkot landed in the United States for a working visit in Washington as a guest of the Chairman of the Joint Chiefs of Staff Joseph Dunford. During his visit to the American capital Eisenkot will be meet with senior US military and defense officials to discuss “military cooperation in the face of significant defense challenges in the different regions of the Middle East.”The talks are expected to focus on the regime offensive in southwest Syria which could put Iranian and Shiite militias troops close to Israel’s northern borders, a red line for Jerusalem.