Abitbol said that Haidar has asked countries with ties to Saudi Arabia, including the Canadian government, to intervene on the blogger's behalf. 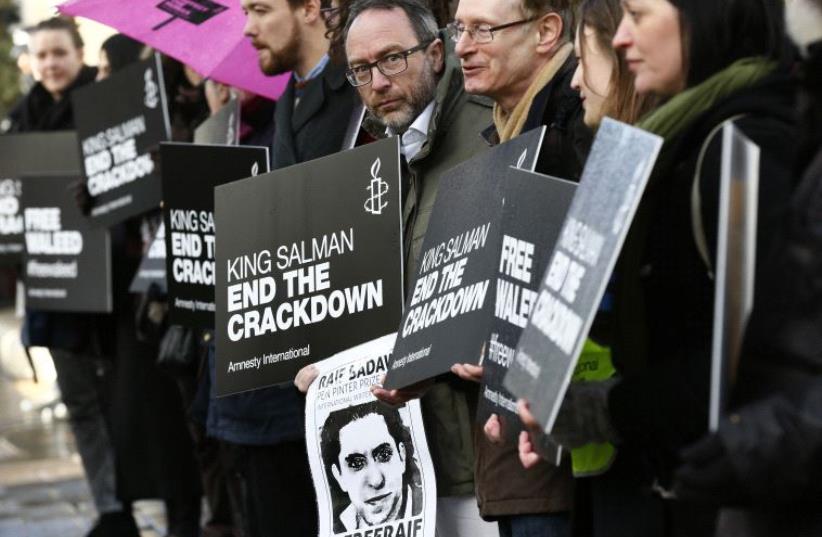 DATE IMPORTED: January 08, 2016 Demonstrators hold placards during a protest for Saudi blogger Raif Badawi, outside the Saudi Arabian Embassy in London, Britain January 8, 2016.
(photo credit: REUTERS)
Advertisement
MONTREAL - Imprisoned Saudi blogger Raif Badawi, whose public flogging in the kingdom last year generated a global outcry, now risks a new round of lashes, a co-founder of a Canadian foundation advocating his release said on Tuesday.Evelyne Abitbol, who founded the Raif Badawi Foundation with Badawi's wife, said a "reliable source" in Saudi Arabia claims he faces a new flogging after being sentenced to 10 years imprisonment and 1,000 lashes in 2014 for breaking the kingdom's technology laws and insulting Islam.Saudi embassy officials in Ottawa and Saudi government officials in Riyadh were not immediately available for comment.Reuters was unable to independently confirm the source's claims.Abitbol declined to name the source but said it was the same person who had alerted Badawi's wife, Ensaf Haidar, in 2015 before he received his first 50 lashes, the only part of the flogging that was reportedly administered.The source did not indicate when the flogging would take place."Unfortunately, it could happen at any time, if it happens," Abitbol said by phone in Montreal.Abitbol said that Haidar has asked countries with ties to Saudi Arabia, including the Canadian government, to intervene on the blogger's behalf.Canada's Foreign Affairs Minister Stephane Dion said in Ottawa that his department is trying to confirm whether the claims are true and has urged the Saudi government to allow Badawi to join his family in Canada."We are trying to have the most accurate information possible, because if this information is true, it would be shameful," Dion told reporters on Tuesday. "Canada completely condemns this type of lashing."Haidar, who was in Germany to present a journalism award on Wednesday in her husband's name, could not be reached for comment. She was granted asylum in Canada, where she lives with the couple's three children in the province of Quebec.Abitbol, the foundation's director, wants Saudi Arabia to withdraw the flogging punishment, strip Badawi of his Saudi citizenship and let him leave the country for Canada.Last December, the European Parliament gave Badawi the Sakharov Prize for Freedom of Thought