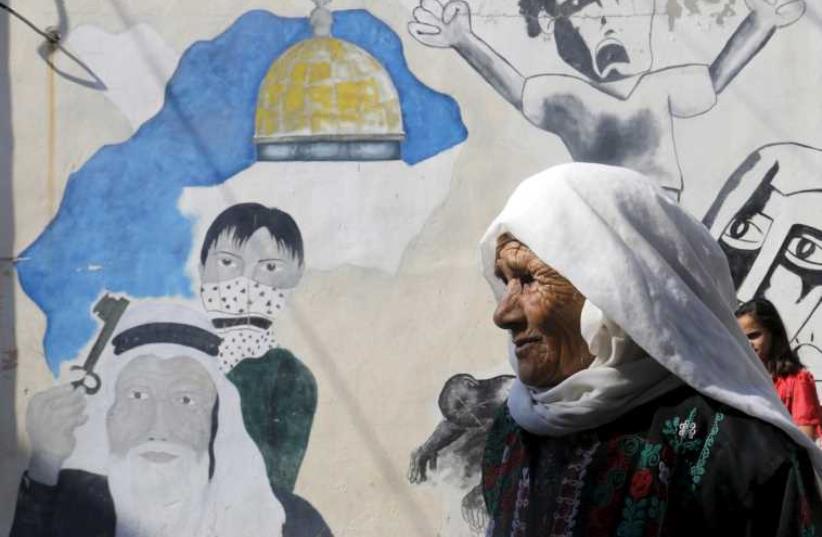 A Palestinian woman walks at Al-Baqaa Palestinian refugee camp near Amman
(photo credit: REUTERS)
Advertisement
Palestinian journalist Khoulud Asaf says she was “surprised” when Palestinian Authority President Mahmoud Abbas today appointed her as the new head of the Palestinian news Agency Wafa, which has a staff of 260 reporters and editors as well as administrative positions.“This position is a culmination of all of the hard work that I have been doing for more than 20 years,” Asaf told The Media Line. “But many men still question the ability of women to take over these positions.”Wafa, the Palestinian News Agency, was established in 1972, under the authority of the Palestine Liberation Organization (PLO), and then the Palestinian Authority (PA), after it was formed in 1994.Asaf, 48, is from the village of Arrabe near the northern West Bank town of Jenin, and a mother of three teenagers. She is a member of the Palestinian Journalists Syndicate, the professional organization of Palestinian journalists, and one of two women on the board. Since 2010, she has been the head of the women’s committee of the Journalist’s Syndicate. She has worked as an editor at Wafa for ten years.Asaf says that women’s issues have often been pushed aside in favor of political goals such as ending the Israeli occupation of the West Bank and creating a Palestinian state. Wafa is seen as an arm of the Palestinian government, rather than an independent agency that criticizes the Palestinian government."We must empower women in the media so that more women reach high positions,” she said. “That will also make media more involved with feminist issues.”Women journalists often face obstacles while trying to do their jobs. A recent report by The Palestinian Center for Development and Media Freedoms (MADA) found that violations against female Palestinian journalists from both Israeli soldiers and Palestinian security forces have tripled in the past three years. One female journalist, Najla Mahmoud Al-Haj, was among 17 Palestinian journalists killed during the fighting between Israel and the Islamist Hamas last summer.“I feel good that my new boss is a woman,” Doha Said, a woman who also works at Wafa, “Now I can write more about women in many fields not just in social issues, which is what the former chief wanted. Now there will be more women working on economics and even sports, because the new chief believes women can make changes.”Said said that Wafa is playing an important role in the history of Palestine, and working there has been a “dream.” Palestinian analysts say that Asaf’s appointment could be an important signal for other female journalists.“This is new hope for the future of journalism here,” Mamdouh Aker, a professor at Al-Najah University told The Media Line.“There should be quotas to increase the number of women in all fields from journalism to law enforcement.”