In historic ruling, US court awards $2b to families of Iran-backed terror victims

The US Supreme Court generally defers to the executive on cases delving into foreign policy, especially if Congress stands with the executive. 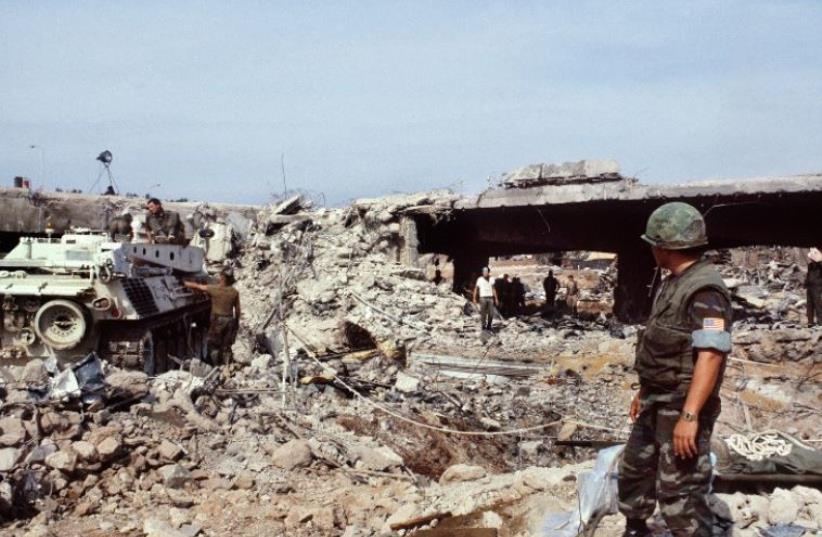 US marines continue to search for victims after a terrorist attack against the headquarters of US troops stationed in Beirut on October 31, 1983
(photo credit: AFP PHOTO)
Advertisement
Despite improved US-Iran relations, the US Supreme Court on Wednesday gave a historic $2 billion victory to the families of Americans killed in attacks blamed on Iran.At its January hearing on the issue, the US Supreme Court seemed to be seriously entertaining allowing around $2 billion in frozen of Iranian Bank Markazi's funds to go to the families, but the 6-2 vote in favor made that possibility which risks major tensions in bilateral relations, including over the terms of the recent nuclear deal, a reality.  The court's decision was a rejection of an appeal brought by Bank Markazi, Iran's central bank, contesting a 2014 lower-court ruling that stated the money should be handed over to plaintiffs representing hundreds of Americans killed or injured in the 1983 bombing of a US Marine Corps barracks in Beirut, the 1996 Khobar Towers truck bombing in Saudi Arabia, suicide bombings in Israel and other attacks.The money would go toward satisfying a $2.65 billion judgment against Iran that the families won in US federal court in 2007 in a case filed in 2001. The money is held in New York in a trust account at Citibank, part of Citigroup Inc, but was not fully discovered until 2008-2010.At issue before the justices was whether Congress violated the separation of powers principle enshrined in the US Constitution by passing the law that specified the funds held in the trust account go toward paying off the judgment.One issue which portended well for the plaintiffs was that the Obama administration and Congress, despite the Iran deal, were united in favor of the victims receiving the frozen funds.The US Supreme Court generally defers to the executive on cases delving into foreign policy, especially if Congress stands with the executive.In January, now deceased Justice Antonin Scalia said Congress regularly enacts laws that are narrow in focus and affect ongoing cases. It is legal so long as it does not undo a court case that has already been decided, Scalia said.His missing vote and the fact that he has not been replaced were why the vote of 6-2 did not include 9 justices as is the rule.In January, Justice Ruth Bader Ginsburg noted that the case before the court on Wednesday actually concerned judgments in 19 different lawsuits that were consolidated.Justices Elena Kagan and Stephen Breyer suggested the case should be viewed from a foreign policy perspective. Generally, in foreign policy disputes, courts give more deference to the executive branch. In the Iran case, President Barack Obama and congressional leaders support the plaintiffs.In that vein, Justice Anthony Kennedy, who often casts the deciding vote in close cases, wondered if Congress has more leeway when the US has "very delicate relations" with the country in question, as it does with Iran.On the flip side, Chief Justice John Roberts, seizing on an argument made by Bank Markazi, appeared troubled by the US Congress improperly dictating the outcome of legal disputes by passing a 2012 law specifically relating to this case to help the families obtain the money.During a one-hour oral argument in a case that comes before the top US court at a delicate time in US-Iranian relations, Roberts used the analogy of a "strongman" leader of a foreign country calling the judiciary to tell judges how to rule."I'm not sure I see what the difference is here," Roberts said.Roberts’ harsh attack on the Congressional law and the position of the victims surprised some since in June he was adamant in the famous Zivitofsky case - about whether US citizens born in Israel could write Jerusalem on their passports at place of birth – that Congress could intervene in heated foreign policy issues.There he voted in favor of Congressional power in foreign affairs despite the case having major political and diplomatic implications and despite being in the minority on the court, which struck down that Congressional law 6-3.There had been uncertainty about where other justices would ultimately vote.Justice Kennedy had even grilled lawyers on both sides, at one point criticizing the argument made by the Obama administration's lawyer, Edwin Kneedler, in support of the families. But ultimately all of the justices besides Roberts and Justice Sonia Sotomayor voted to reject the appeal, paving the way for collecting on the massive judgment against Iran.The plaintiffs accused Iran of providing material support to Hezbollah, the Iran-backed Shi'ite Islamist political and military group responsible for the 1983 truck bomb attack at the Marine compound in Beirut that killed 241 US servicemen. They are also seeking compensation on behalf those killed or injured in other attacks they linked to Iran, including the 1996 Khobar Towers truck bombing in Saudi Arabia that killed 19 US service members.The lead plaintiff in the case is Deborah Peterson, whose brother, Marine Lance Corporal James Knipple, was killed in the Beirut bombing.Along with a large number of law firms, Israeli NGO Shurat Hadin is involved in the case representing the Rubin family whose family member was injured in a 1997 double suicide bombing on Ben Yehuda Street in Jerusalem.Shurat Hadin also has a range of other judgments against Iran which are not part of the case which have led it to seek an injunction in a New York court against the Irandeal unfreezing a range of foreign funds until their other clients, families of victims of other terror attacks, are compensated.Reuters contributed to this report.