In wake of Cologne attacks, Germany may be grappling with migrant 'rape game'

The "game," which is believed to be particularly widespread in Egypt, entails orchestrated sexual assaults by groups of men in large events attended by masses of people. 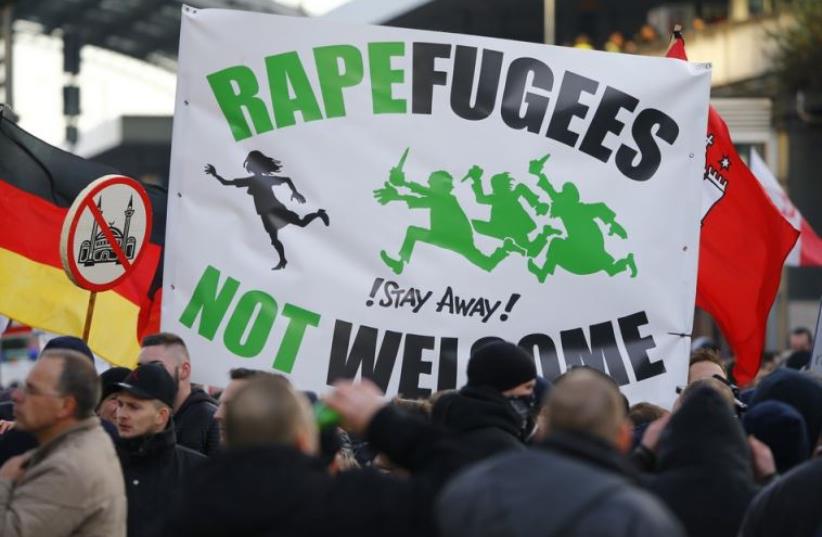 Supporters of anti-immigration right-wing movement PEGIDA (Patriotic Europeans Against the Islamization of the West) rally in Cologne
(photo credit: REUTERS)
Advertisement
Authorities in Germany suspect that the wave of alleged sexual assaults in Cologne on New Year’s Eve which were said to have been committed by migrants from North Africa and the Middle East was part of a “rape game” that is popularly known in Arab countries as “taharush.”The “game,” which is believed to be particularly widespread in Egypt, entails orchestrated sexual assaults by groups of men in large events attended by masses of people.As part of the “game,” a group of men surround their intended victim. A few members of the group proceed to sexually assault their prey, while others in the gang prevent passersby from intervening. In some cases, the incident ends with full-on rape of the woman or mugging. The logic behind carrying out such an orchestrated attack during a large-scale demonstration is that it is much easier for the assailants to disappear into the massive crowd and avoid identification, thus enabling them to escape punishment.Perhaps the most infamous case – at least to Western audiences – involving gang rape in a public space was that of television journalist Lara Logan.Logan, a correspondent for CBS News’ "60 Minutes," survived a brutal sexual assault at the hands of a mob while covering Egypt's political uprising in 2011. The incident took place in Cairo's Tahrir Square on the day Egyptian ruler Hosni Mubarak stepped down from power.Logan, a South Africa native and longtime war correspondent, was one of dozens of journalists attacked during several weeks of protests throughout Egypt leading up to Mubarak's ouster in February 2011. She was covering celebrations in Tahrir Square for "60 Minutes" when she and her team were surrounded by a mob and she became separated from her crew, according to CBS News.After suffering a brutal and sustained sexual assault and beating by the mob, Logan was rescued by a group of women who intervened, along with Egyptian soldiers who finally arrived on the scene, CBS said.Authorities in Germany are now trying to gauge the methods used by Arab countries in dealing with attacks similar to those allegedly committed in Cologne.“These kinds of crimes, which were committed by groups of young people, are a source of concern for the local police during large-scale gatherings like protests and demonstrations,” a police spokesperson said.Emotions are running high in German cities after the mass attacks in Cologne and other towns. Over 200 masked right-wing supporters, carrying placards with racist overtones, went on a rampage in the eastern city of Leipzig on Monday night, throwing fireworks, breaking windows and vandalizing buildings, police said.The attacks have deepened public skepticism towards Chancellor Angela Merkel's open-door refugee policy and her mantra that Germany can cope with the 1.1 million migrants who arrived in the country last year. It has also fueled right-wing groups.As roughly 2,000 anti-Muslim "LEGIDA" protesters marched peacefully in the city center, police said a separate group of 211 people walked through the southern Connewitz district before setting of fireworks, erecting barricades and vandalizing property. The top floor of one building caught fire.
The group carried a placard reading "Leipzig bleibt Helle", or "Leipzig stays light", an apparent reference to the skin color of residents.