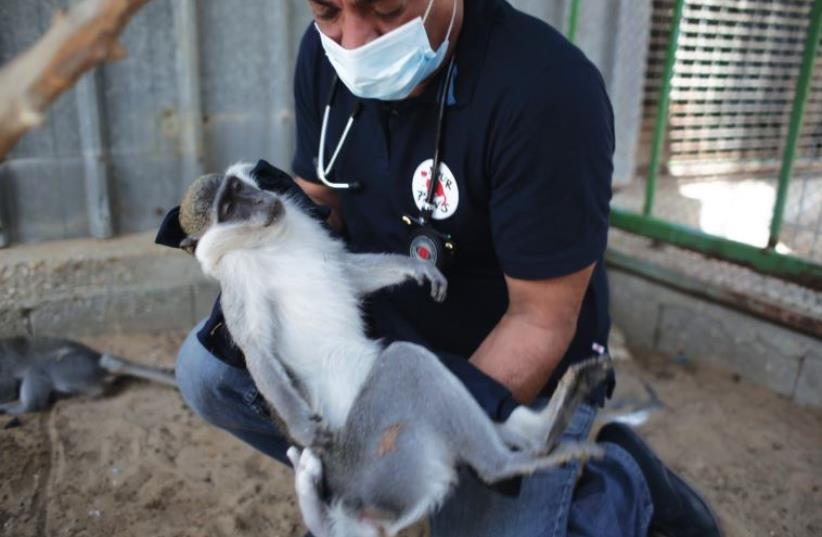 FOUR PAWS team leader Dr. Amir Khalil holds a sedated monkey at the Khan Yunis Zoo in the Gaza Strip
(photo credit: FOUR PAWS)
Advertisement
It’s been called the world’s worst zoo, but there are hopes that the Khan Yunis Zoo in the Gaza Strip may eventually be able to shake off that title.For that reason, international animal welfare organization FOUR PAWS sent a three-person team to provide the facility’s 15 animals with medical treatment. According to owner Muhammad Oweida, around 200 animals have died of starvation since 2014. According to earlier reports, many of the animals were smuggled from Egypt through underground tunnels.Though the zoo was once a humming venue for school trips and family outings, it has since resorted to displaying dead animals that have been mummified or stuffed through the owner’s amateur taxidermy.The organization criticized this practice and told The Jerusalem Post on Wednesday that it has implored the owner to stop it, saying it could be a health risk to the live animals and is disrespectful to the dead.Following four days of checkups and treatment, lasting from Friday to Tuesday, the team found that most of the animals were in good health.Still, the animals live in “devastating conditions,” which include a lack of food, clean water and adequate enclosures.Two animals were found with health issues: an emu that had a limp and a monkey with a cough. The coughing monkey, as well as a deer, were both found to be pregnant.Among the treatment provided were vaccinations, vitamins and blood tests for the monkeys.In an assessment released on Tuesday of the zoo and this most recent “operation,” as the group calls it, FOUR PAWS said that the facility’s inadequate enclosures could pose harm to humans at the zoo and in the neighboring areas. “In the worst case scenario, if one of the wild animals escapes and runs free, the staff of the zoo and local residents could end up in danger,” the report said.A journalist, part of a documentary film crew that was accompanying the team, was scratched by a monkey “because its enclosure was poorly erected,” according to Dr. Amir Khalil, who headed the team. “The second fence was just missing!” As a result of the visit, FOUR PAW’s international spokesman Nikolay Evstratov told the Post on Wednesday that the zoo’s porcupines and a pelican had been moved to a bigger enclosure. Also, “enrichment tools” were provided to some animals to encourage scavenging, such as with burying food or scattering it throughout the cages. He noted that they are still discussing options with Oweida to find a “final solution” for the animals, which hopefully would include transferring them to a better facility.Oweida, 24, told Reuters in March that his zoo fell into a decrepit state following Operation Protection Edge in 2014, which prevented him from getting enough food for the animals. In an attempt to raise money, he has resorted to putting the animals up for sale. In January, he tried to sell one of the emaciated tigers for $23,000.Evstratov commended Oweida for reaching out to FOUR PAWS for help in the first place and for maintaining contact with them, though he said the most crucial step would be for him to sign a legal agreement for FOUR PAWS to have custody of the animals.“We see the will of the owner to improve conditions for the animals,” he said.This most recent operation comes after a series of others in Gaza since September 2014.Three lions were eventually transferred from Al-Bisan Zoo in northern Gaza to a center in Jordan.Most recently, in March and April, two lions was relocated from Gaza to a zoo in Tulkarm in the West Bank through a joint effort by the Office of the Coordinator of Government Activities in the Territories and the Gaza Ministry of Agriculture.