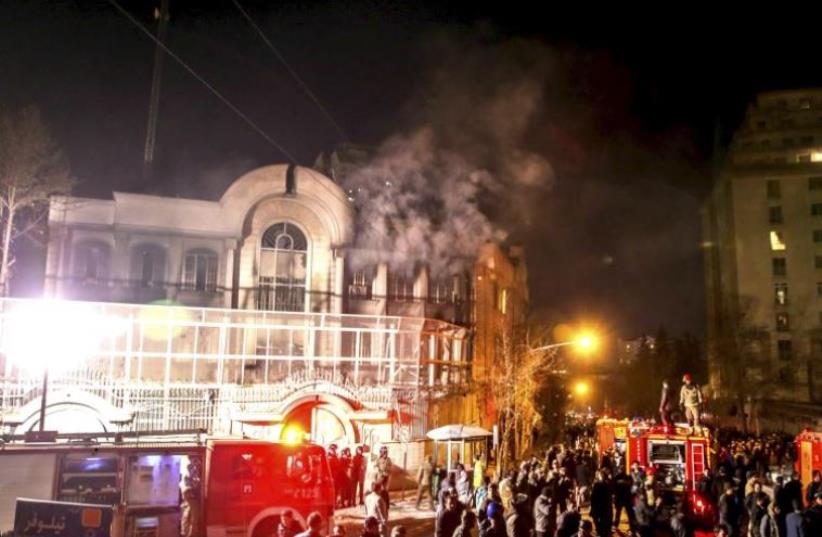 Flames rise from Saudi Arabia's embassy during a demonstration in Tehran January 2, 2016
(photo credit: REUTERS)
Advertisement
BEIRUT - Iran's judiciary has issued verdicts for 20 people accused of storming Saudi diplomatic missions in January and will announce them in the near future, an official was quoted as saying by the judiciary news agency on Tuesday.Sunni Muslim Saudi Arabia cut diplomatic relations with its Shi'ite Muslim rival Iran after protesters stormed the kingdom's embassy in Tehran and consulate in Mashhad in response to Riyadh's execution of a prominent Saudi Shi'ite cleric.The Iranian government condemned the assault and President Hassan Rouhani, keen to improve Tehran's long-strained relations with its neighbors and the West, asked the judiciary to punish the protesters and prevent further attacks.The Mizan news agency quoted a judge as saying that the verdicts for 20 defendants had been issued and "will be announced soon." He did not give the names of the 20 and did not say whether they had been convicted or not.Iran's judiciary announced in April that more than 100 suspects had been arrested over the attack on the Saudi missions and 48 charged. All were released on bail.Assaults on foreign embassies have occurred throughout the Islamic Republic's 37-year history, often harming its diplomatic relations. Protesters attacked the US Embassy in 1979, the Kuwaiti mission in 1987, Saudi Arabia in 1988, Denmark in 2006 and Britain in 2011. None of the assailants were convicted.